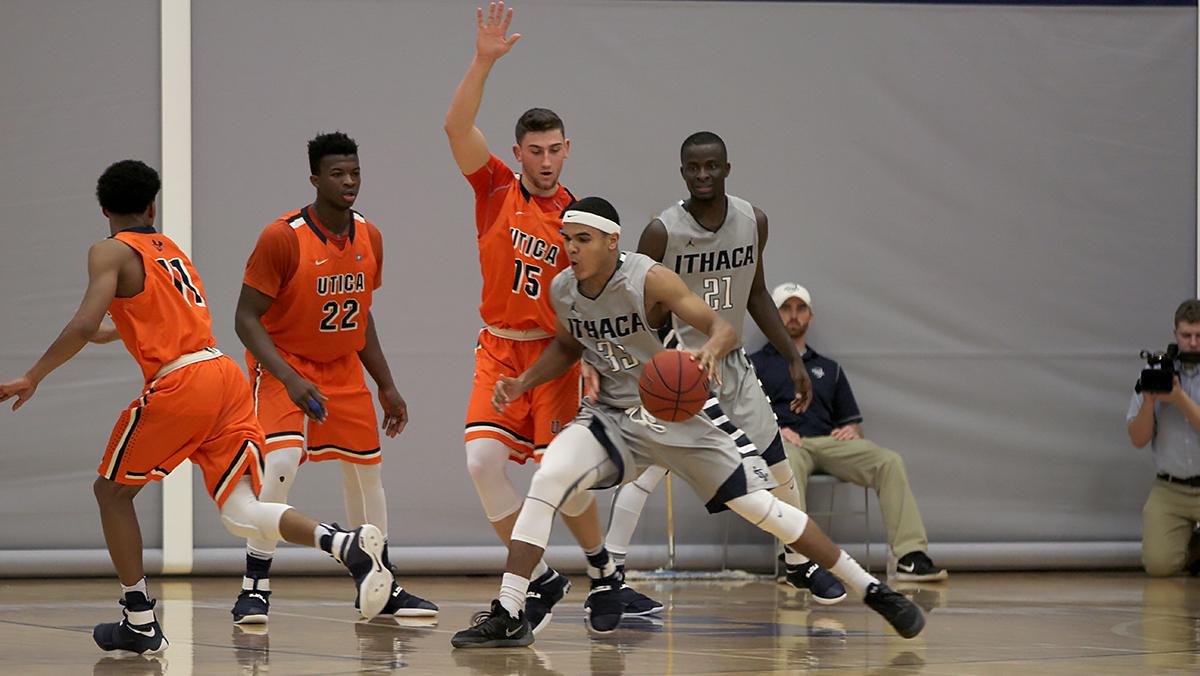 The Ithaca College men’s basketball team lost 70–53 to the Utica College Pioneers after struggling to get its outside shots to fall. With the loss, the Bombers fall to 6–11 on the season and 2–6 in Empire 8 play.

Basketball head coach Jim Mullins was not on the sidelines for health reasons.

Defensively, the Blue and Gold got 12 steals and 15 turnovers, but struggled to do anything with the ball after. The team shot four for 26 from behind the arc.

“I just think we got off to a slow start,” Green said. “Once we see a couple not go in, it kind of gets your confidence down, and you don’t know how to really come back from it. So it is more a mindset thing and it really got us.”

Junior guard Joey Flanagan had success from the deep, making three, 3-pointers on eight attempts for a team leading 14 points.

Junior guard Marc Chasin averages 19.1 points per game and .331 percentage but went 0–5 from 3-point range. Chasin said he will have to work on his shooting prior to the next game.

“It just happens,” Chasin said. “It just wasn’t my night, but I’ll take the shots all over again if I had to and hopefully I’d make more. Nights like these happen, you just gotta forget about it and bounce back.”

Towards the end of the game, both teams put in their bench players. One of the players taken out was junior guard Carroll Rich who scored 6 points and made 3–7 from the field.

Rich said he will have to work on picking his spots during practice this week.

“I think I need to pick my spots better,” Rich said. “I had some good takes that just didn’t fall. It was just one of those days. I think just picking my spots, noticing matchups, picking up really where I can get to the rack or just attack and kick out, find for other guys.”
The Bombers will compete against the top team in the Empire 8, the St. John Fisher College Cardinals at 4 p.m. Jan. 28 in the Ben Light Gymnasium.