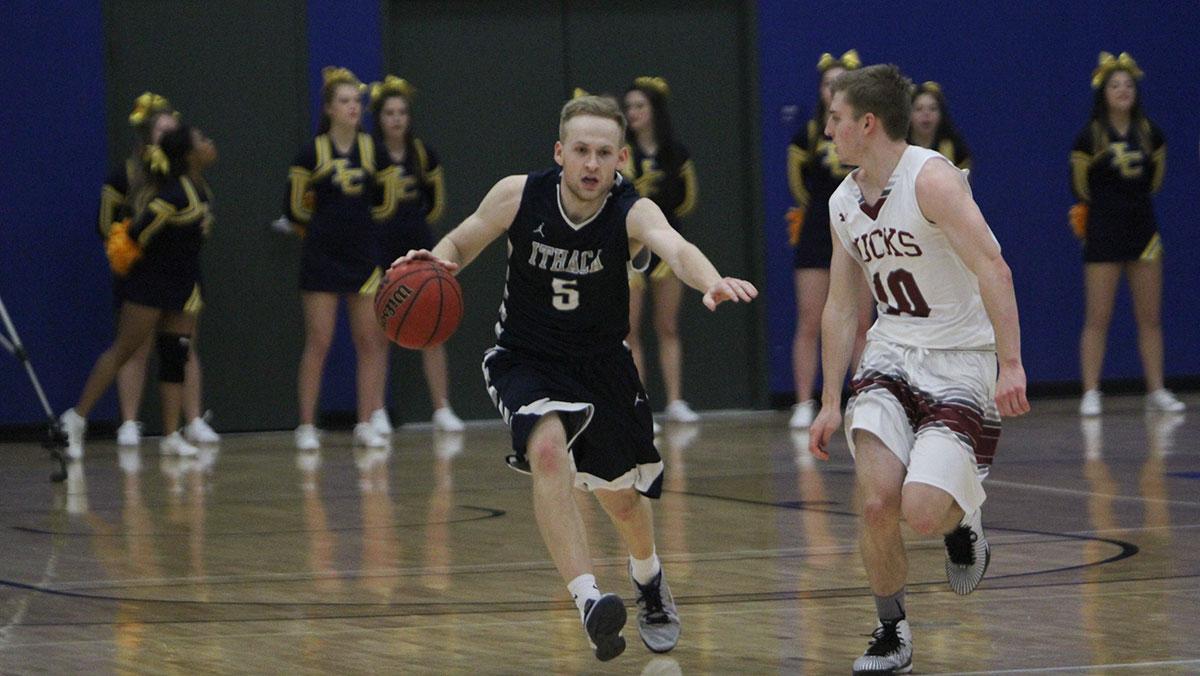 Heading into winter break, the men’s basketball team was looking for answers. With only a 2–5 record to show for the beginning of the season and Empire 8 action on the horizon, the team needed to find its groove.

After a loss to Hamilton College five days after Christmas and another a week later to Elmira College to open conference play, the Bombers were 2–7 and faced with a Utica College squad that had won two of its last three games. The Bombers won that game 97–90, and would go on to win eight of the next 11, including a five-game win streak.

The South Hill squad had seemingly swung its season around. It went from embarrassing losses, such as a 74–48 drubbing at the hands of Trinity College, to dominating wins over its opponents, showcased in its 15-point win over Houghton College.

There was plenty missing in the season’s early stages. One could point to the team’s youth, with seven freshmen and eight new players overall. There was not much familiarity among the team members, and chemistry on the court is vital in smooth team play.

Head coach Jim Mullins said knowing your teammates’ tendencies and preferences could make the difference between an assist on the game tying 3-pointer and throwing the ball out of bounds while thinking your teammate will be there.

Mullins said his goal was to have the team find its identity by the time conference play began.

“With eight new faces on this year’s team and a very tough early schedule, we knew it would take some ‘gelling’ for this team to hit its stride,” he said. “Our hope was that this would occur by the time we got into Empire 8 play, and that’s pretty much what happened.”

Building chemistry was not as hard as originally thought. In fact, it was practically enforced for the team. Members of the athletic teams are, for the most part, the only students who remain on campus over breaks. After a few days at home for holiday celebrations, the basketball team was back on South Hill and among the only people on campus.

Being seemingly isolated on campus and, as coach Mullins said, often living together in any of the dorm options, players grow closer than ever and sometimes all it takes to find cohesion on the court is finding cohesion off of it.

Co-captains Keefe Gitto and Max Masucci are the only seniors on the team, and Gitto said they took it upon themselves to do what it took to right the ship and get the season back on course.

Gitto has averaged 15.7 points per game since returning from break, while Masucci has pitched in with 23 assists in 15 games.

Gitto said the lack of classes or other campus activities meant there was a relaxed environment for players, and some teammates even temporarily moved in together.

“During break there is a lot of downtime that allows the team to get together in a less high-intensity setting,” Gitto said. “A lot of the underclassmen move in with the upperclassmen for the break, and this is where a lot of the off-court relationships are formed.”

Gitto said with practices and games being the only concrete items on their daily schedules, the players had opportunities to come together and partake in activities that would help them increase their chemistry.

“As a team we tried to get together to do something almost every night,” he said. “We went bowling and took trips to the mall, but we would mostly just hang out at someone’s house. Being together without any distractions really helped us all learn more about each other, which in turn translated to building cohesiveness on the court.”

Masucci said chemistry played a role in the team’s play, and that it was the job of upperclassmen to help players that were new to the college game make a smooth transition.

“I think it definitely had something to do with building chemistry,” he said. “I wouldn’t blame it on the younger players though. It’s our duty as upperclassmen to ease them into the college game. We played a very tough out of conference schedule so we could be ready for conference games later in the year.”

Mullins said he seems to have found a preferable starting lineup and bench rotation, but even so, he believes the chemistry aspect of the game is the main cause for the team’s good play as of late.

“While we have settled into a rotation, I still believe that the primary reason we are playing better is that the guys are becoming more familiar with one another, learning each other’s strengths and weaknesses,” he said.

Aside from building chemistry, Gitto said the squad was able to put more attention solely on basketball with no academic responsibilities to attend to over the break.

“During the break the coaching staff really focused on breaking down and simplifying what we were trying to achieve,” Gitto said. “With a young team this really helped our focus and contributed to our success.”

With the players gelling better than ever, pushing the pace of play and getting everyone on the floor touches, Mullins said he thinks the team is one to watch in the final stretch of the season.