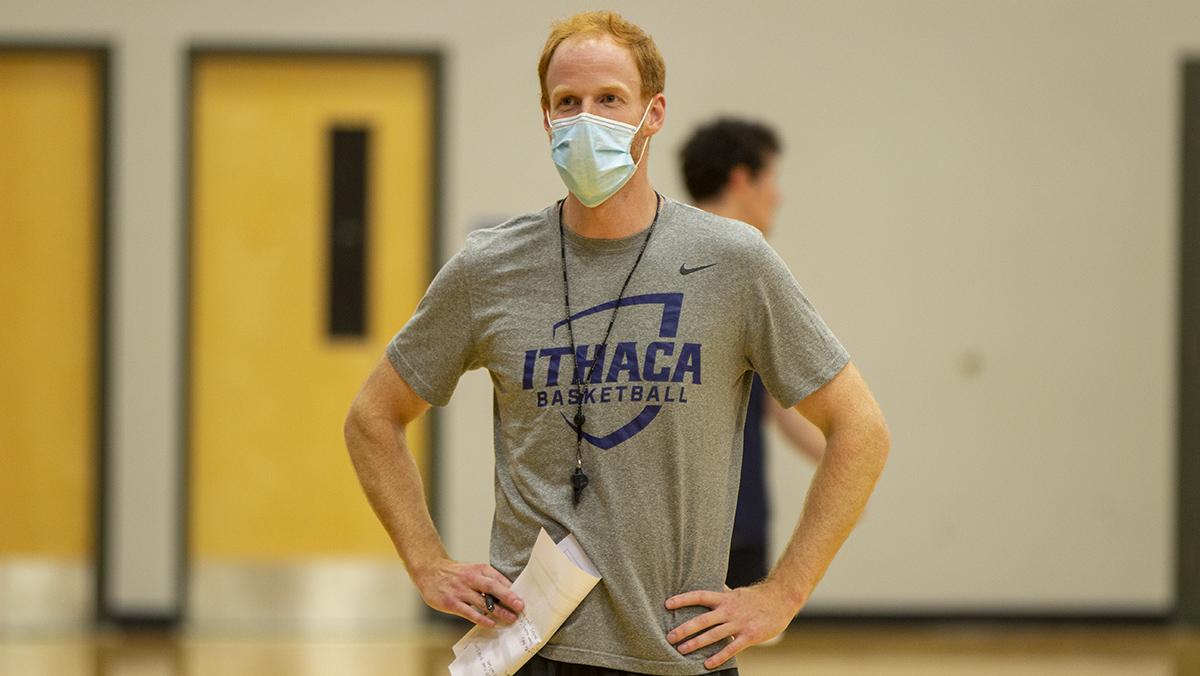 The position was left empty after former head coach Sean Burton was promoted from assistant coach April 10, 2020. Dow comes to the college with an impressive coaching resume that includes stops in the NBA and NBA G League. He most recently coached in the Canadian Elite Basketball League with the Saskatchewan Rattlers, serving as the assistant coach starting in April 2021 before being promoted to interim head coach in July 2021.

Dow said he believes his wide array of experience will be a huge help to the players. In particular, he said he plans to make use of his experience as a video intern with the Dallas Mavericks to aid the Bombers in being better prepared to hit the court with the most knowledge possible.

“We’re doing a lot of teaching via film,” Dow said. “Whether that be film of other players, film of other teams, concepts on us like we’re doing today. [So] being able to teach through film has been new for our guys both individually and as a team.”

Dow said the adjustment to South Hill has gone well and he has enjoyed coaching with Farid.

“I’m loving it,” Dow said. “We have a really great group of guys in the locker room. [Farid] is awesome to work with. He’s one of my favorite guys I’ve ever worked with.”

The two have been working together for a month, but Farid said he and Dow are already on the same level with each other. He said they are similar in their drive and work ethic, and understand what it takes to lead a successful college team.

“I think we complement each other well because we’re two guys who love the game of basketball,” Farid said. “We’re always trying to figure out how we can be better. We’re also guys who aren’t shy about putting in work, getting on the court with the [players] and doing all the extra work that we think is necessary for our program to be successful.”

Not only is Dow enjoying joining and working with Farid on the coaching staff, he is also already at work creating a special bond with the players. Dow said he has been impressed with the work ethic of the team early on in the season, and even finds himself feeling a family-type atmosphere as a result of all the work they get in.

“I’m already seeing it,” Dow said. “Like we have guys that I’m not setting up any workouts and they’re hitting me up to work out, and we’re on the court every day by 7 a.m. Coach Farid doesn’t just preach family to preach family. It really is a family atmosphere, and I can’t say enough positive things about our group of guys.”

Members of the Bombers’ squad like sophomore guard Blake Haber said they also have enjoyed the arrival of Dow to South Hill.

“I think it’s great, he has a lot of good experience,” Haber said. “Just a really good guy to have around. He works out with us, he’s very knowledgeable about many things and he’s been around, so it’s just a really good resource to have.”

Haber said he believes that Dow has been accepted by the team in the early going, explaining that Dow and Farid have two styles of coaching that pair strongly together.

“I think he fits in with us pretty well,” Haber said. “There’s a good difference between Coach Farid and him. I think we’ve been very receptive of him.”

Although he was hired shortly before the preseason started, Farid said Dow has been able to connect with the players swiftly. Even with being in the position for only a month, he said players constantly meet with Dow and text him for extra work.

“He does a good job of bringing positive energy to every conversation he’s in, and our guys have gravitated towards him pretty quickly,” Farid said. “He’s done a really good job of building relationships with our guys and building that trust. That’s hard to build, to be honest, that’s not an easy thing to do. He’s done that really well.”

As the assistant coach, Dow said his goal is to help Farid in any way he can. From running a practice, to teaching specific drills, anything to make Farid’s job easier. With that approach and style, he said he thinks that will help the team reach its ceiling under the new coaching staff.

“Whether [our potential is] a Liberty League Championship, national championship, or a .500 team, I’m not really sure yet,” Dow said. “We’re working with these guys, but whatever the best we can be is, I want to help us get there.”