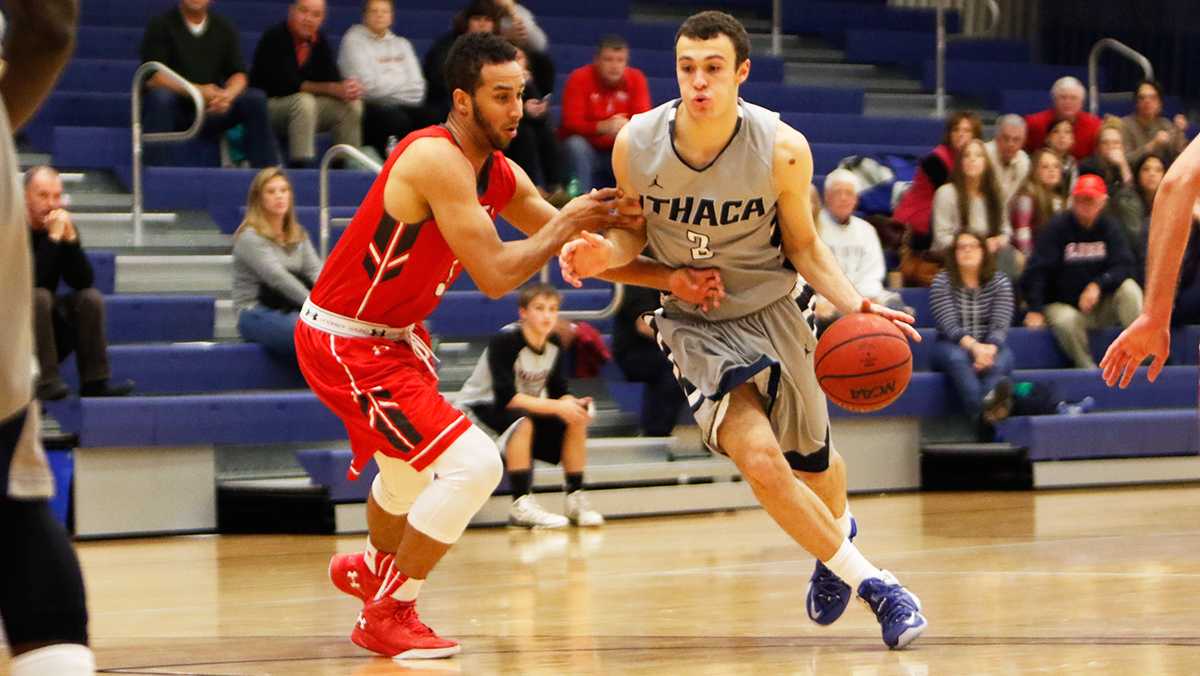 After a thrilling 83–74 win over rival SUNY Cortland on Dec. 1, its third consecutive victory, the Ithaca College men’s basketball team took to the hardwood at Ben Light Gymnasium for the final game of a short, two game home-stand against St. Lawrence University.

The Bombers started the game quickly, with sophomore guard Joey Flanagan nailing a three to open the scoring. Senior guard Sam Bevan would then steal the ball away and feed sophomore guard Carroll Rich for an easy layup, making it 5–0 Bombers 30 seconds into the contest. St. Lawrence would then go on a run of six straight points. Freshman Ben Crawford would pour in back-to-back layups, and junior Kyle Edwards would drain a two of his own to give the Saints a 6–5 lead.

Bevan said the biggest problem for the Bombers on the day was their defense, or lack thereof.

“Defense was the biggest issue,” Bevan said. “It wasn’t scoring, we moved the ball well, but we let up almost 90 points, that isn’t helpful.”

The Bombers would pull to within four with 4:15 to go in the first half on a three ball and a deuce by Bevan, but that would be as close as the Blue and Gold would get. Seven points from Edwards and two free throws from Crawford would extend the Saints lead to 11, 44–33 with 1:40 to go in the half. The Bombers headed into the break trailing 44–37.

The seven-point hole was the largest deficit Ithaca had faced since they trailed by 13 to the University of Scranton in their only other loss of the season back on Nov. 17.

Coming out of the break, the college continued to shoot its way back into the contest, with Flanagan and freshman guard Peter Ezema scoring key baskets to tie the game with 10:52 remaining.

The Saints would extend the lead to 10, 67–57, with a bucket from junior Kyle Kobis and another basket from Crawford, giving him 23 on the day.

The Bombers refused to go down quietly, though they were down by 11 with 5:35 to go. Over the final two minutes, the Bombers would go on a 9–6 run, but it would be too little, too late. As the final horn sounded, the scoreboard favored the Saints, 88–78, dropping the Bombers to 4–2 on the year.

Crawford, who led all Saint scorers with 25 , said weaker opposing defenses helped lead to his offensive outburst and the team’s turnaround from 1–4 to 3–4 after their defeat of the Bombers.

“I’ve just been finding open seams in the ‘D,’” Crawford said. “My teammates have been finding me in open spots, and we’re playing really good basketball.”

Crawford also said a meeting before their game against Elmira College was the reason the team has gotten back on the right track.

“We changed the culture,” Crawford said. “We met as a team, tried to regroup and raise the energy and now we’re figuring it out.”

While the Saints have figured it out, Bombers coach Jim Mullins was left scratching his head at the way his squad performed. Mullins said he was waiting for the squad to make one last push to pull out another come-from-behind victory.

“I kept expecting us to wake up,” Mullins said. “Throughout the year, in scrimmages and in games, we’d fallen behind and responded very well. What was frustrating tonight was I don’t think we responded.”

The Bombers will look to rebound from their tough loss when they travel to Wells College to face the Express at 7 p.m. Dec. 8 at Farenthold Athletic Wing.