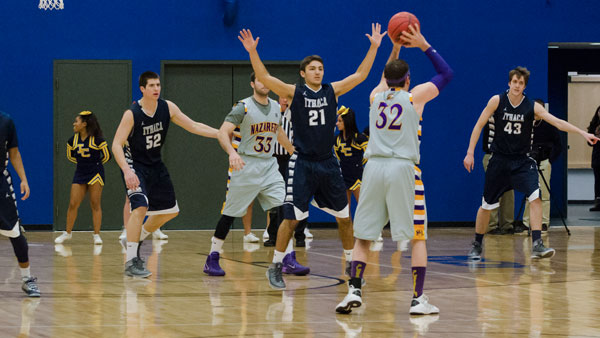 Justin Mader/The Ithacan
The Blue and Gold set up their defense in a game Feb. 7 in Ben Light Gymnasium.
By Gilbert Guo — Contributing Writer
Published: February 8, 2014

The men’s basketball team snapped a two-game winning streak on Feb. 7 at Ben Light Gymnasium after losing to Nazareth College 76–64.

The Bombers kept the score close early in the first half, only trailing 20–15. After the Blue and Gold’s offense struggled to score for several minutes, Nazareth capitalized with a 9–2 run to take a 12-point lead.

Even with the early deficit, the Bombers kept fighting back. With less than two minutes to play in the first half, senior forward Frank Mitchell converted two free throws and scored on a breakaway layup. Junior center Keefe Gitto also gave the team a spark, dunking with two hands through contact with under five seconds to go in the half, bringing the South Hill squad within six points.

While the Bombers have struggled all season to begin the second half of their games strong, the team broke out with a 7–0 run to take a one-point lead. The momentum swung back and forth, with eight total ties and eight lead changes.

“I was pleased with the way we climbed back into the game,” Mullins said. “I thought we maintained our composure early.”

Mitchell kept the Blue and Gold in contention all night, finishing the game with 25 points and seven rebounds. He said he was happy with the team’s effort.

“We played hard, we battled,” Mitchell said. “We came out in the second half pretty strong. That’s a weak point for us really.”

The Bombers were in the bonus with about 11 minutes to play in the second half and converted 20 of 25 free throws.

Despite the South Hill squad’s double bonus with seven minutes remaining, Nazareth had game-defining advances in the closing minutes.

“I thought we played a good team game tonight,” Ford said. “Everyone had big contributions, big rebounds, big stops down the stretch.”

The Bombers fell to 5–16 with the loss. With the team out of playoff contention, Mitchell said it will set its sights on changing the playoff picture in the conference.

“I think we’re a lot better than we were to start the year, so hopefully teams take us lightly and we can shake things up in the playoffs,” Mitchell said.