Men’s crew hopes to use experience to have successful year 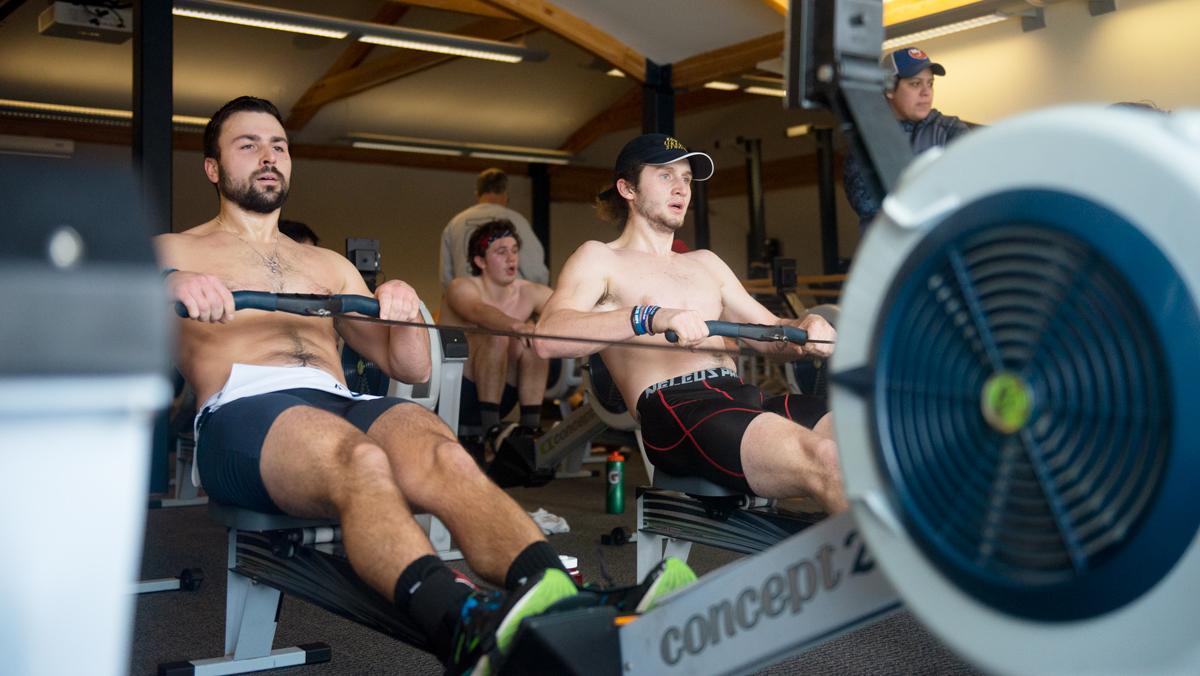 The Ithaca College men’s crew team plans to break through this year as one of the best teams in the state and nation by developing returning athletes and improving its young core.

In the 2017–18 season, the Varsity 8 boat placed fourth in the New York State Championships. At the Liberty League Championships, it placed second overall. After graduating just two seniors last year and having only one on the current roster, the Bombers are looking to improve on their results from 2017–18.

Six of the eight members of the Bombers’ Varsity 8 boat are returning and will be competing together again this year. Senior Captain Eric Stamer said he is excited to have a lot of returning rowers.

“In the past, we haven’t really had a lot of returners in the same boat, so the lineups are constantly changing,” Stamer said. “So it’s good we’ll be able to build on that.”

Junior Hunter Flamm said that with many returners, the team members’ chemistry and trust in one another will improve. He believes the team’s spring break training trip to Lake Lanier, Georgia, will be crucial.

“We want to try and forge really strong bonds going into our spring break training trip and over the winter months when we’re training inside,” Flamm said. “When we get on the water in March, we’re a really cohesive unit and can carry that over into racing season.”

Head coach Dan Robinson said the recent small senior classes have prevented the Bombers from having good depth. Similarly to last year — when 28 of 32 rowers were underclassmen, this year — 24 of the 33 rowers are underclassmen.

Flamm said although the team has a small upper class, there is still strong leadership within it.

“I think the younger guys looking up to not as many upperclassmen doesn’t really change how they look up to them,” Flamm said. “If anything it magnifies it a little bit because, as Eric being the only senior, what he says carries a lot of weight. The same is for some of the juniors now, as we’re starting to get older. We seem to be starting to occupy that position of leadership as well.”

Robinson said the main focus for this year will be exceeding results from last year at all races.

“The last couple of years, our goal has been growth, because our roster had dipped,” Robinson said. “Most of our top guys in our varsity boat are back. This year it’s more about improvement. We feel pretty good about our top guys, we just have to improve a little bit.”

Flamm said the returners on the team are very eager for the upcoming spring based on previous races.

“The sophomores are very motivated to continue achieving high results,” Flamm said. “A lot of upperclassmen and returners that were disappointed how last season went — and part of the fall — are also very highly motivated to flip those results this spring.”

Stamer said the team’s mindset this year is about going the extra mile.

“This year, a lot of people have been mentioning they’ve been eager to do more work than necessary,” Stamer said. “We try to incorporate it, even if it’s just an extra body circuit at the end of a workout — we’re trying to build extra strength for when we’re on the water.”

Robinson said New York State Championships and National Invitational Rowing Championships are the two races that the team gears their entire season towards.

“Our two big races are at the end of the year,” he said. “Our championship race is called the National Invitational. That’s our goal. Get there and do well. Make the finals. Our goal is to get to the final in that and win a New York state title the week before.”

Crew is one of two varsity sports at Ithaca College that does not have an NCAA Championship, the other being gymnastics. For rowing, the 2019 National Invitational will be held May 12 in Saratoga Springs, New York. The top six teams make the finals and the top three earn medals. Division I schools like Boston College compete at the race alongside Division III schools like the Bombers.

The South Hill squad kicks off its season with the Cayuga Duals at 8 a.m. March 30 at the Cayuga Lake Inlet.

“We’ve gotten faster every year in terms of our averages on the rowing machines as a team, and guys continue to do things that they thought they couldn’t do,” Flamm said. “They prove themselves wrong.