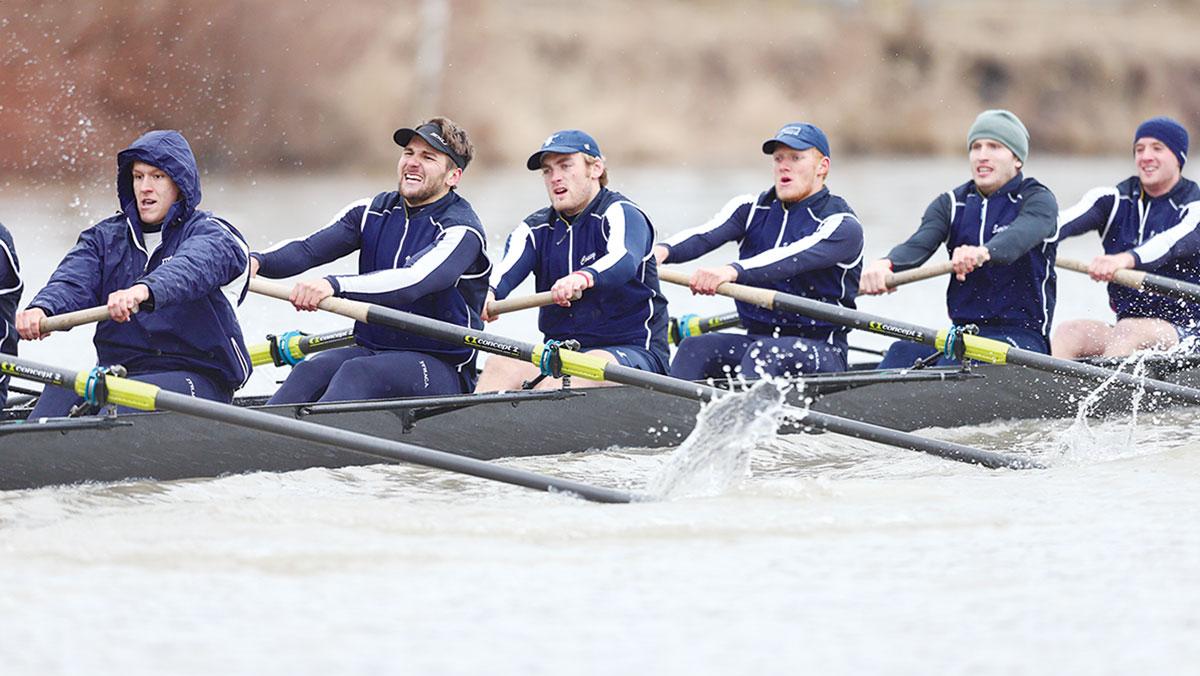 Looking out on Cayuga Lake in February, all that can be seen is about a mile or so of ice stretching up toward the middle of the lake. It may be hard to believe, but in a little over a month, that water will come alive with the sounds of paddles slapping the water in one smooth rhythmic motion, commands being shouted and cheers echoing from shore to shore.

Last year, the men’s crew team had a phenomenal season. Its first varsity boat went undefeated during its regular season and then placed second, third and fourth in the three postseason tournaments in which it participated.

Head coach Dan Robinson said while last year’s first varsity boat was one of the strongest he’s seen in his tenure at the college, this year’s team will provide more depth in the second and third varsity boats.

“Last spring was one of the fastest boats we’ve ever had,” he said. “Last year, the varsity boat was significantly faster than our second string or third string boat. This year it’ll be more of a team thing. It’ll be good.”

However, seven of the eight rowers from last spring’s boat graduated, and the Bombers will have to try to repeat their success without those seniors.

Robinson said the team will take a different approach because of its increased depth. He said he holds out hope for this team though, believing they can be just as successful as last year’s squad because the returners have improved.

“We have as many guys faster than that intermediate range as there were last year,” he said. “We’ve got real competition [with one another in practice], so it’s going to make them all faster.”

He also said the 11 seniors on this year’s team will be a big factor in replacing the nine seniors that graduated last year.

Senior Dan Brauchli said he believes the loss of the seven seniors may affect the Bombers because they are a lighter boat this year, which gives them the potential to be quicker.

“I think we’ll be a little bit lighter, and if we row clean that’s one of the best ways to be fast on the water,” he said.

Senior Matt Dorio said the team needs to step up after losing such a big class, but it is ready for the challenge.

“We graduated one of the best classes to ever row for Ithaca crew last year, so it is going to be very important that we believe we can achieve the same things they did, and it is going to take leadership from everyone to get there,” he said.

Returning senior Charlie Enright, who was the lone junior rower in the first varsity boat last year, will be key for the Bombers as they look to begin their spring season.

The crew season technically began in the fall with several preseason regattas that allow the team to see what it needs to improve on and to get back into the swing of things. Robinson said he felt the team had a great fall and they had finished very strong. He said of the 20 boats the Bombers entered over the course of the fall season, 11 placed in the top three in their respective divisions, which ranged from varsity to junior varsity.

Brauchli said he came away from the fall with the same feeling.

“I think we came off of a pretty strong fall,” he said. “We knew that we had some big shoes to fill from those seven guys leaving us, those seniors, we just came in this year with the mentality of we gotta put our nose to the grindstone and be ready to work and demand more from the guy on each side of you.”

The South Hill squad begins its regular season with four home meets. In these early season meets, the Bombers will face Division I schools such as the University of Michigan and Trinity College, as well as rival Hobart College. However, Robinson said his team doesn’t seem to be intimated and said beating these big teams can be done through hard work and focus.

“One of the really interesting things about men’s collegiate varsity rowing is there’s no real differentiation between divisions, so therefore we could be going up against big schools like Michigan and I think for us, we try and take it and turn it into extra motivation,” he said.

After such a strong season last year, the Bombers hope to repeat their same success and continue to maintain the status of one of Division III’s best crew teams, Brachuli said.

“We want to leave just as much of an impact as the crews before us, and some of the crews coming behind us, will leave as well,” Brachuli said. “So that’s a big form of motivation.”