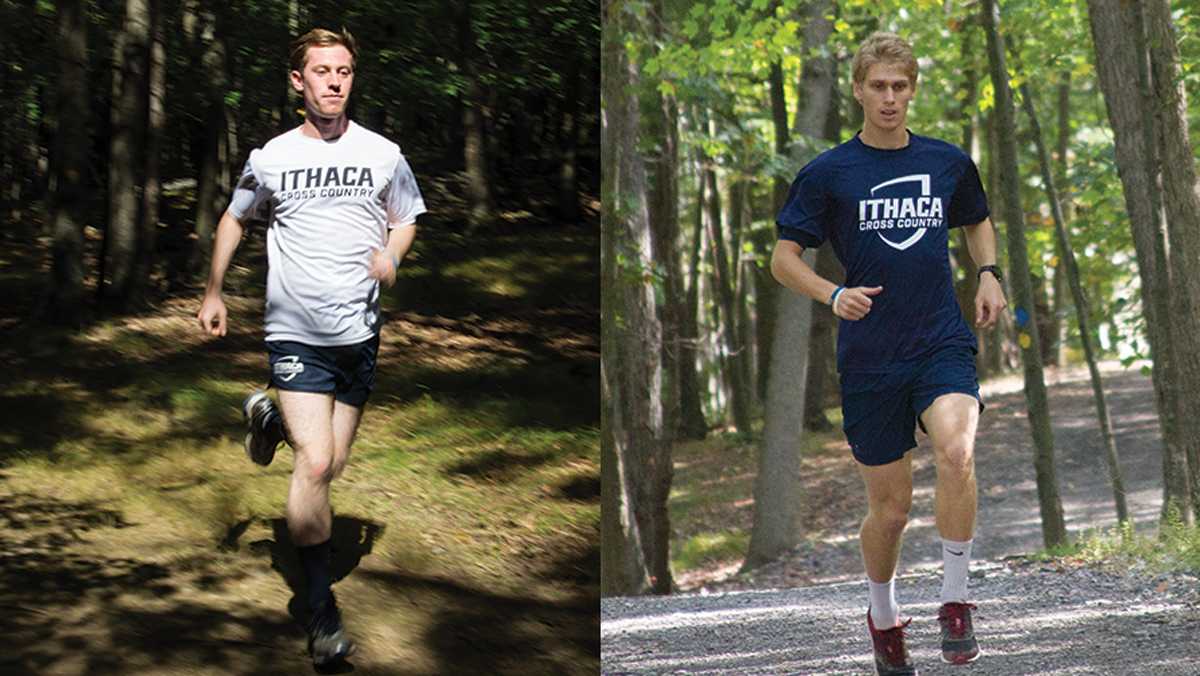 MAXINE HANSFORD AND TED ZERIVITZ/THE ITHACAN
Junior Dan Hart and senior Eric Melcer are on the cross country team and are also housemates. Besides running together five times a week at practice, Hart and Melcer do extra runs together every morning.
By Max O'Neill — Staff Writer
Published: September 13, 2017

Hart and Melcer live together off campus with two other teammates, senior Tim Chappell and junior Sam Hayden. Chappell is not on the cross–country team this year but will be returning for the indoor track season.

“On Sundays, me and Eric and some of our teammates will run together, but in the morning, it’s often just me and Eric running,” Hart said.

Hart also had his best time in the Empire 8 Championship for his freshman year, with a time of 28:07.1 for 52nd place. During his sophomore campaign, his best finish was a time of 27:13.6 in the Paul Short Run in 209th place.

Hart said Melcer bounces ideas off of him since they live together.

“He’s the captain, so he has the final say, but it’s kind of cool that he says, ‘Hey, Daniel, I’m thinking about changing this on our team, what do you think about it?’” Hart said. “He’ll ask for help and let me give input, which is really cool.”

Hart said a very important part of cross–country is knowing how to keep your body healthy and that living with a teammate helps him do that.

“Eating enough to refuel and making sure you don’t party too much is almost more important to how you compete than actual training,” he said.

Head coach Jim Nichols said he thinks Hart and Melcer decided to room together because they have similar goals, mindsets and aspirations, which will help the success of the team.

Over the three years that Melcer has been on the cross–country team, Nichols said, Melcer has improved in both his leadership capability and in his running. Part of the reason Melcer was named captain, Nichols said, was from his experience being a resident assistant for two years.

“He’s dealt with various situations as far as discipline and bringing groups of people together as far as team unity and group dynamics and things of that nature,” he said. “He brings a very positive attitude to being a senior on the team and I think he enjoys being on the team and likes to share that with everybody that’s around him.”

Prior to the start the 2017 season, the Bombers voted to name Melcer captain. Melcer said it is an honor to be named a captain by his teammates.

Melcer said he is making sure he and the rest of his teammates are putting in extra work outside of practice to accomplish the team’s goal of getting to nationals.

“We are doing a lot of extra things this year to accomplish it,” he said. “We tracked our nutrition for a little while just to make sure we are getting enough calories. We’re really focusing on recovery. We’re doing a little bit extra workouts at the beginning to try to get ready to like peak at the right time and peak well.”

Outside of team goals, Melcer said he wants to be a teammate anyone can always come to if they need something.

Hart said Melcer is a good captain because he leads by example and lays out what is expected of the other teammates.

“Eric is good at getting people to be into the team outside of running and competing — being excited for just going to the dining hall together, hanging out outside of practice, and whether it’s singing on the bus, the bus to and from the meets — it’s the lively experience that gets people excited,” Hart said.

Men’s cross-country looks to be challenged at Liberty League