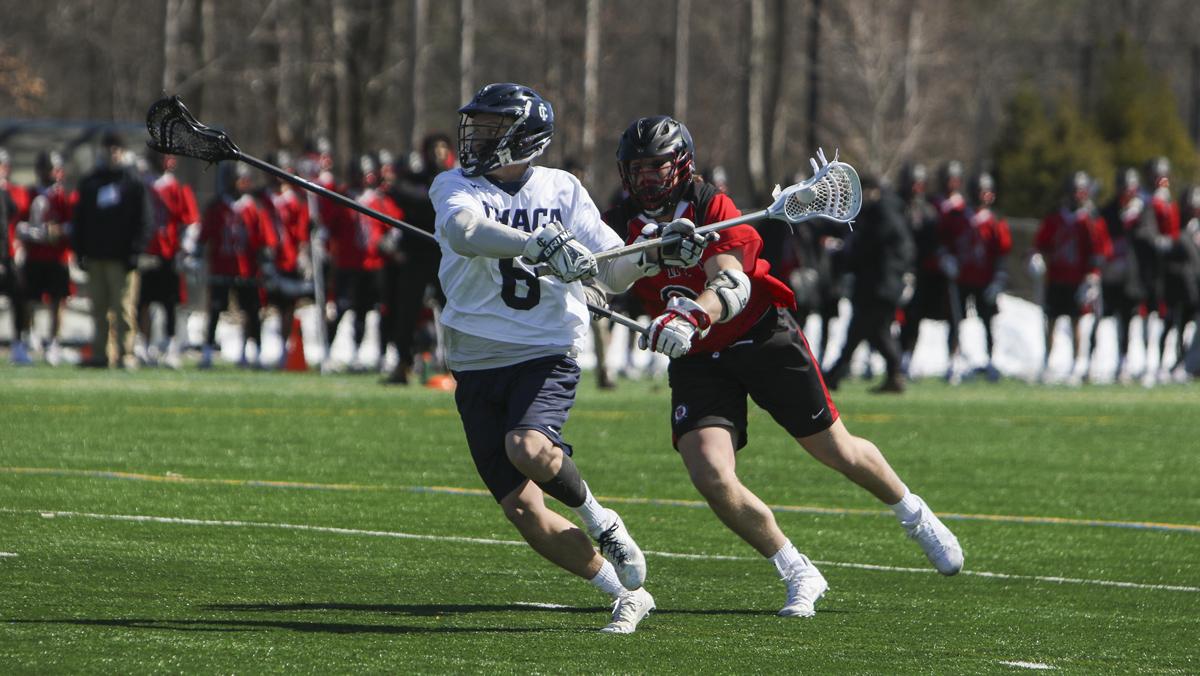 The No. 19 Ithaca College men’s lacrosse team dropped a Liberty League Conference matchup to No. 15 Rensselaer Polytechnic Institute 13–11 at Higgins Stadium on March 23.

The loss brought the Bombers to a 4–2 record overall and a conference record of 1–1.

This was the first matchup between the two teams since last years Liberty League semi-final matchup that the Blue and Gold won 8–7 in double overtime.

The Engineers jumped out to a 2–0 lead early when RPI senior midfielder Will Killeen scored off of an assist from RPI junior attacker Owen Putman and Putman added one of his own a minute later.

After the next six possessions did not result in any scoring for either team, the Blue and Gold were able to cut the deficit in half when junior attacker Ryan Ozsvath scored his seventh goal of the year off of an assist from senior midfielder Conner Crosson with 8:46 remaining in the first quarter.

The Engineers moved the deficit to two three minutes later after a goal from senior captain Lucas Bastarache that was assisted by senior defender Quinn Fettig. The Bombers responded four minutes later when senior midfielder Josh Della Puca scored an unassisted goal, but the Engineers were able to close out the period when freshman attack Cooper Urban hit the twine with 1 second left on the clock in the first quarter.

The Engineers would extend their lead three minutes into the second quarter when senior midfielder JP McGrady got an unassisted goal. With 9:16 remaining in the half, sophomore attack Connor Brumfield scored his 14th goal of the season off of an assist from Della Puca.

Within the next two minutes, the teams traded goals as Putman scored his second of the game and then Ozsvath scored his second with 7:06 remaining. Ozsvath added another goal that was assisted by junior attack Dan Lee with approximately four minutes remaining, making the score 6–5. Della Puca was able to tie the game at six with 2:56 left, but the Engineers answered back 14 seconds later when RPI sophomore midfielder Tyler Hancock made the score 7–6. No goals were scored over the remainder of the half, and the Bombers entered halftime down by one goal.

The Engineers came out firing in the second half, scoring a goal 17 seconds in when Putman scored his third goal of the game off of an assist from Hancock. Ozsvath responded with his fourth and then Lee added his first of the day with 8:39 remaining in the third quarter to tie the score at 8. Della Puca assisted on both Bomber goals.

The Engineers took control after the score was tied and were able to take a 9–8 lead with just under five minutes remaining in the quarter when Urban scored his second goal unassisted. Less than a minute later, Putman scored his fourth goal off of an assist from RPI sophomore midfielder Jason Bram. The score became 11–8 13 seconds later when Urban completed the hat trick off of an assist from RPI senior attacker JT Kelly.

Lee cut the deficit to two a minute later off of an assist from Della Puca, but the Engineers were able to get goals from Hancock and Putman to make the score 13–9. There would be no more scoring in the third quarter, and Lee was able to score two goals in the fourth to make the score 13–11, but that is how the game would end.

The Blue and Gold will look to avenge the loss when they face St. Lawrence University at 4 p.m. March 27 at Higgins Stadium.