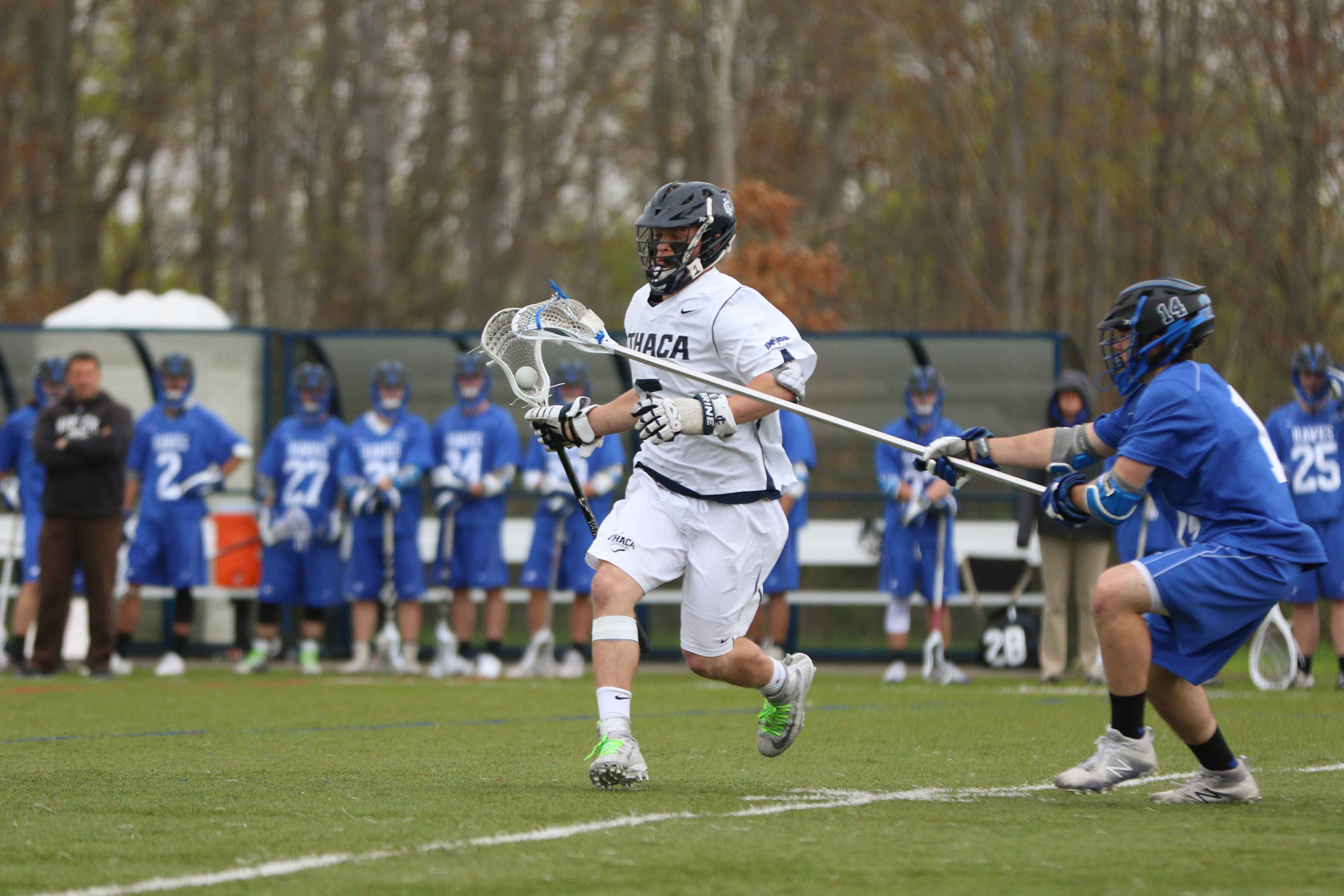 MANYA MARGOT/THE ITHACAN
Sophomore midfielder Josh Della Puca has the ball and looking to pass to a teammate while sophomore defender Matthew Puzo of Hartwick looked to hit Della Puca to get the ball back. The Bombers defeated the Hawks 18–8.
By Cal Dymowski — Staff Writer
Published: May 1, 2017

The Bombers honored nine members of the Class of 2017 in a pregame ceremony. The win on the day was the 28th career Empire 8 win for the Class.

The Bombers got things going just less than 40 seconds into the game when junior attacker Kaelan Fitzpatrick found junior midfielder Stephen Morrell for an early goal and a 1–0 lead.

Hartwick would answer just three minutes later when senior midfielder Jake Sachse scored to even the game up a 1 goal apiece.

In that span, senior attacker and captain John Januskiewicz recorded a hat trick and sophomore attacker WIll Witter netted a brace.

Hartwick got back on the board six minutes before the half as senior attacker Matt McCallan took the feed from freshman midfielder Nick Couvaris to cut the Bomber lead 11–2.

The Blue and Gold didn’t end the half there as sophomore attacker Connor Hulme and sophomore midfielder Brendan King both tallied a goal to give Ithaca a 13–2 lead heading into the break.

The Blue and Gold outscored the Hawks 4–1 in the third quarter, two of those goals coming from senior attacker Sean Ferrito to complete a senior day hat trick.

Freshman midfielder Tyler Krampf continued his stellar debut campaign on the South Hill, racking up two assists in the quarter and helped the Bombers to a 16–3 lead after three periods.

Hartwick would not go down without a fight however, slicing through the Bomber defense for five fourth-quarter goals.

Freshman attacker Dan Lee finished a solo effort before Krampf’s third assist of the game gave Hulme his third goal of the game, and delivered the Bombers an 18-8 win over the Hawks.

Senior goalie Justin Issacs got the start and the win, registering four saves while only surrendering two goals.

Januskiweicz, Ferrito and Hulme all finished with hat tricks, and Morrell and Krampf tallied three points for themselves.

The win secured a 7–1 Empire 8 record for the Bombers, and clinched the number-two seed for the Empire 8 tournament from May 3–6.

The Bombers return to action at 4 p.m. May 3 at Higgins Stadium when they host the Nazareth College Golden Flyers for the Empire 8 Championship semifinal game.