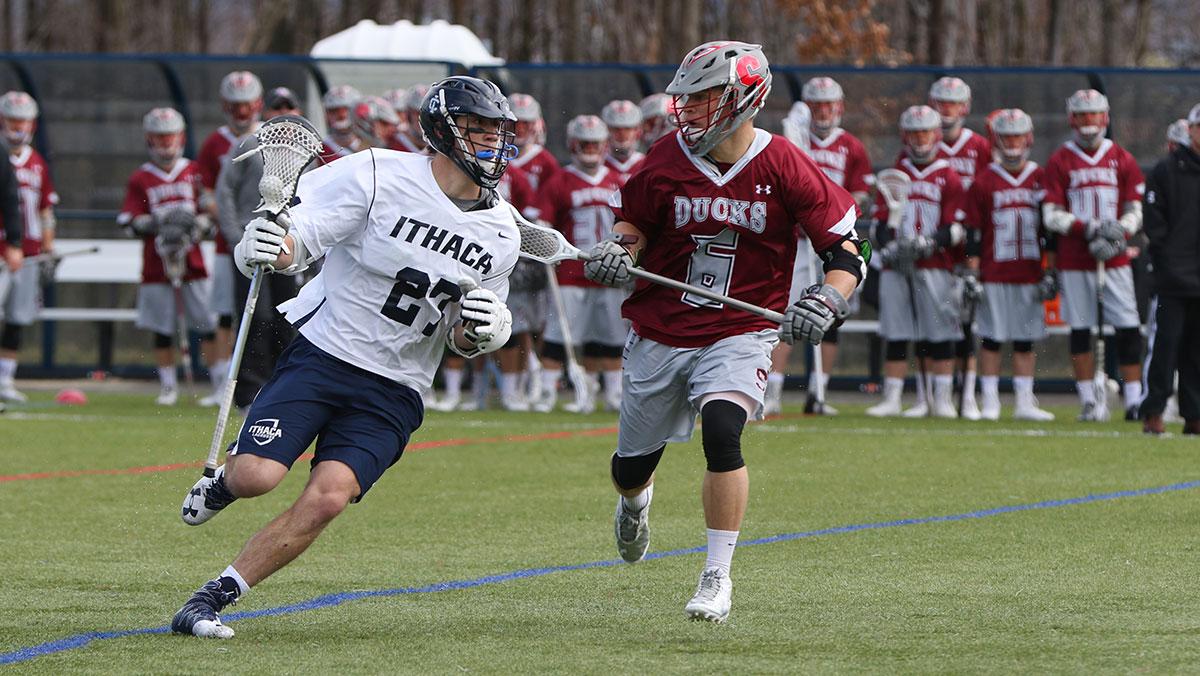 Mike Walker is a senior midfielder on the No. 2 nationally ranked men’s lacrosse team. As one of the team’s five captains, Walker has started in 15 of the Bombers’ games this season. So far this season, he has put up 34 points, 23 goals and 11 assists, including a four-goal and one-assist performance against the then–No. 11–ranked Nazareth.

Staff Writer Matt Hornick spoke with Walker about his past four years as a Bomber, some of the biggest moments of the season and the secret to the team’s success this year.

Matt Hornick: What were your expectations going into the season?

Mike Walker: My expectations were the same as always: First off, we want to win an Empire 8 championship. There are also mile-marker goals throughout the season, like beating Cortland, beating RIT, Naz and Stevens. After that, it is to get as far in the playoffs as we can, and this year, a national championship is definitely something on our mind.

MH: You mention beating Cortland, and prior to this season, Ithaca men’s lacrosse had not beaten Cortland since 2009, when assistant coach Mike Silipo was a sophomore. What was it like getting your first win against Cortland?

MW: It was a great feeling, especially being that over the last three years, we’ve gone into like six overtimes with them, so it was really great to be able to take them down in regulation.

MH: You also mentioned one of your goals was to beat RIT, who were No. 2 in the nation when you beat them. Can you describe your feelings before, during and after the RIT game?

MW: Since our loss to RPI, we decided to stop focusing on other teams. Going into the game against RIT, we knew they were going to be a tough opponent, but we really needed to just focus on ourselves, and when we play with speed and with our level of intensity, we can play with any team in the country. The game itself was pretty intense — they never let us get out to a big lead and after the game was just a feeling of relief because we were all exhausted just happy to get the “W.”

MH: You haven’t lost a game since March 5 when you lost to RPI, and since then, you have had four very impressive wins. What changes did the team make after that game to be able to go on this run?

MW: Like I said, we put all of our focus on ourselves. We stopped looking at the poles polls and the rankings, and just knew that if we play to the best of our abilities, we can beat anyone.

MH: You just said the team doesn’t pay attention to rankings, but how does it feel knowing you are the No. 2 team in the nation right now?

MW: It’s a nice reward for our good work, but being ranked No. 2 doesn’t matter until it’s May 29 and you’re playing for a national championship.

MH: How does it feel knowing you’re at the end of your final season playing Ithaca lacrosse?

MW: It really hasn’t hit me yet because I still feel like we have a lot of lacrosse to play, but I’m sure it’ll be a weird feeling by the final game when it starts to sink in.

MH: Being that this is your senior season, what has been your biggest takeaway from this year and your whole four years?

MW: My biggest takeaway is that this team has been like a family to me. I can look each guy in the eyes and call them a brother.

MH: Which of your teammates has impressed you the most this season?

MW: I’d say Scott Sidnam who’s been standing on his head recently making double-digit saves almost every game. He was huge in the wins against RIT and Cortland, especially in the fourth quarter.

MH: Now that the end of the regular season is approaching, how has the team’s mindset changed?

MW: We’ve had the same mindset since the loss to RPI to stay focused, not getting ahead of ourselves, not looking at the polls and just focusing on ourselves and playing every game like it’s our last.

MH: Not to get too sentimental, but what is the last thing you’d like to say to Coach Long before you leave at the end of this season?

MH: This team has shown depth throughout the entire roster — what do you expect from this team in the coming years?

MH: How would you like your Ithaca lacrosse career to be remembered?