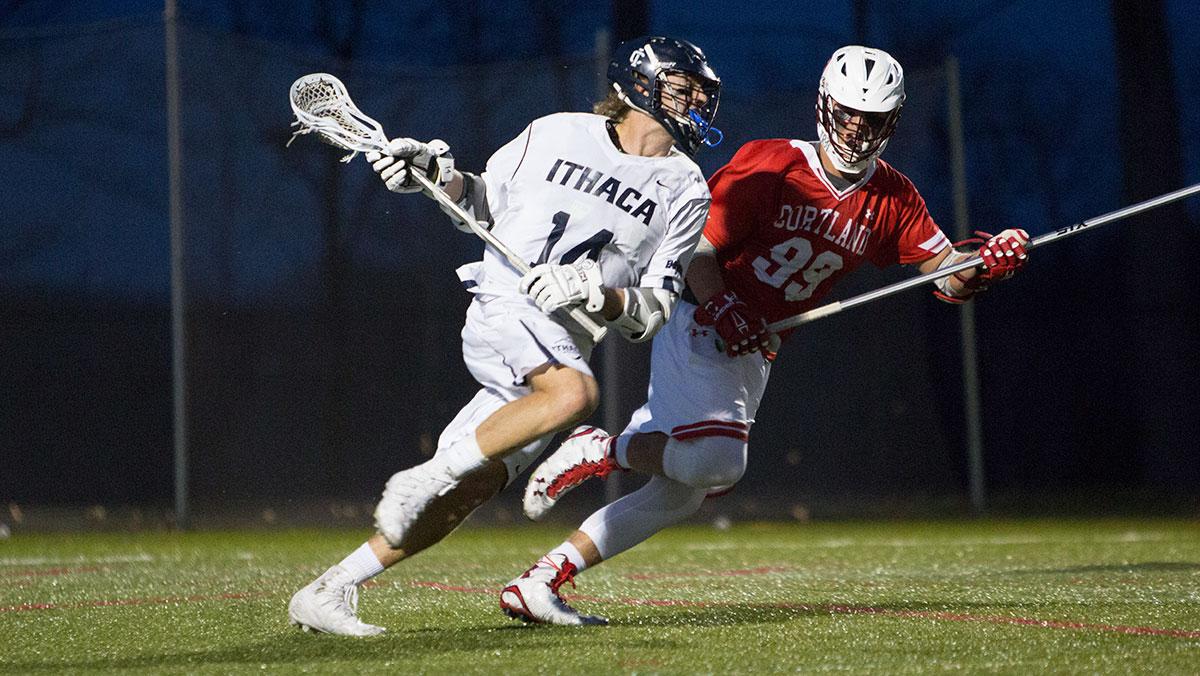 The Ithaca College men’s lacrosse team improved to 8–1 on the season and emerged victorious over the SUNY Cortland Red Dragons on March 30, defeating their archrivals 18–12 in a highly powered offensive affair.

Prior to the game, the Bombers hadn’t beaten the Red Dragons in seven years, including three straight games that ended in an overtime loss.

The Bombers began the game hot, pinning Cortland back on their own side of the field for the first five minutes of the game before freshman midfielder Josh Della Puca scored.

Cortland then rattled off two goals in quick succession before Della Puca struck home for his second goal of the first quarter.

The Bombers and Red Dragons traded goals back and forth to close out the first quarter, and it was the second quarter that ignited the offensive spark as the Bombers scored six times compared to Cortland’s two goals.

The Bombers continued their impressive performance in the third, as the game began to take shape in their favor. Freshman midfielder Brendan King and sophomore attackman Kaelan Fitzpatrick each scored goals of their own. Senior defenseman Eli Gobrecht pushed forward from his position in the backfield to snag a goal to make it 15–8 Bombers, turning the Blue and Gold on cruise control.

The fourth quarter did give the Bombers a scare, as Cortland took a 15–8 deficit and quickly turned it to 15–11.

The momentum shift did not startle the South Hill squad, as the team went blow for blow with the Red Dragons and ended the game on a 3–1 run to clinch the elusive victory.

Senior goalie Scott Sidnam finished the game with 20 saves. He said it felt good to finally beat the Red Dragons.

“It feels amazing,” Sidnam said. “We knew weren’t going to lose this game. We knew coming in we were going to win this game. We finally broke the hex.”

Shumway said on a team goal sheet from this past fall, the team had put an emphasis on beating Cortland.

“This is a standard for where our team is now,” Shumway said. “We think we can go pretty far.”

The Bombers will look forward to the next game at home against the Stevens Institute of Technology at noon April 2 in Higgins Stadium.