Men’s lacrosse takes down No. 16 Stevens 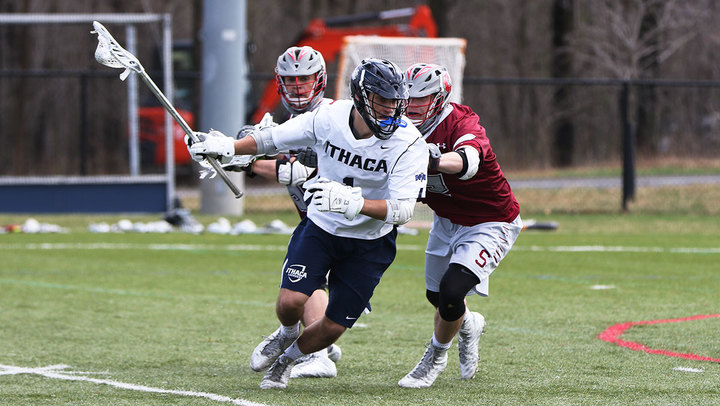 Coming off of its first win against rival SUNY Cortland since 2009, the No. 20–ranked Ithaca College men’s lacrosse team defeated No. 16 Stevens Institute of Technology in an Empire 8 matchup in Higgins Stadium. The Bombers are now 9–1 this season and 2–0 in conference games.

The Blue and Gold dominated this game from the first whistle, outscoring the Ducks 7–2 in the first quarter. Each goal came off of the stick of a different player, including one from sophomore attackman Jake Cotton, who netted one of his team-leading four goals for the day. Stevens’ two goals came from freshman attackman Max Bailey and senior midfielder Matt Ferentini.

The South Hill squad extended its lead to eight goals in the second quarter by netting five goals and only allowing two. Cotton sent two more through the pipes, along with one from sophomore midfielder Stephen Morrell.

The Bombers drilled two quick goals to go into halftime with the eight-goal lead, one from freshman midfielder Josh Della Puca with 25 seconds remaining and one from senior captain long-stick midfielder Andrew Dietz, who snuck one through with just one second left on the clock for his first goal of the season. Freshman midfielder Dean Peluso and sophomore midfielder John Boutureira each scored for Stevens in the second quarter.

The third quarter featured strong defensive play from both teams, as each team only scored one goal and were scoreless for the first nine minutes and 55 seconds of the quarter, until Ferentini netted his second goal of the game for the Ducks. Two minutes later, junior attackman Jack Shumway answered back for the Bombers with a goal of his own off of an assist from junior captain attackman John Januszkiewicz.

The Bombers put the Ducks away in the fourth quarter, putting up four more goals off the sticks of Shumway, Cotton, Morrell and Januszkiewicz. Stevens was only able to score twice, one being scored each by freshman midfielder Nicholas Carnovale and senior attackman Andrew Scrutchfield.

Bombers head coach Jeff Long said his team won so dominantly because of its first-half play.

“We’ve been playing pretty well as of late, but it’s interesting because we only played a good first half,” Long said. “I wasn’t particularly pleased with how we played in the second half, but we were still able to get the win.”

Steven’s head coach Gene Peluso said his team did not play up to the level they are used to.

“We came out flat today, Ithaca kept us on our heels the whole game,” Peluso said. “Our guys put in more effort in the second half but in the first half they just flat out lacked the effort.”

Januszkiewicz led the Bombers in points in the game, with two goals and four assists, while Cotton led the team in goals with four. Cotton said his strong performance was due to his team’s style of play.

“When we play fast it helps the whole team and I was the recipient of some easy goals,” Cotton said.

The Bombers will return to action at noon April 9 in Higgins Stadium when they host No. 13 ranked Nazareth. Long said that will be the team’s biggest challenge so far this season.

“They have two of the best attackmen in Division III and they’re good from top to bottom so we’re gonna keep doing what we’re doing and see what happens next weekend,” Long said.