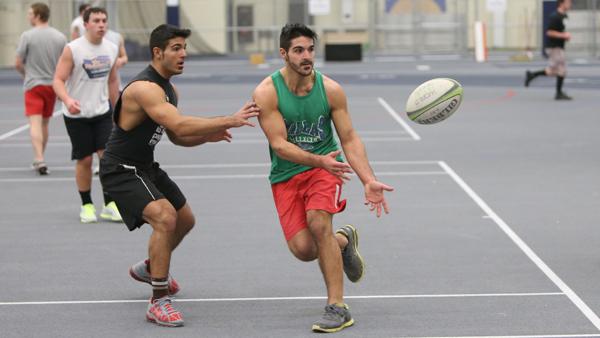 Durst Breneiser/The Ithacan
Members of the men's rugby team practice their offense in the the Athletics and Events center.
By Karly Redpath — Staff Writer
Published: February 28, 2013

After a week of midterms, many students will travel home to see family, friends or escape the cold weather, but the men’s rugby team won’t be headed to such familiar territory. The 29 members of the squad will be boarding a plane headed to Ireland for a week of play.

The rugby team will tour across Ireland for six days. The team members will begin their trip in Dublin and make their way west throughout the week. They will be playing in three games against Irish club opponents and will have two days to work on their play with international coaches. This will be the first time the team has taken part in such an endeavor.

Ireland has played in all seven of the Rugby World Cups, and Head Coach Annemarie Farrell said it will be good for the team to see what it’s like to be a part of the culture in a country with such a rich rugby history.

Captain Jon Mullen said the trip will help develop the team’s younger players in the upcoming season and for years to come. He said it will be an experience the team wouldn’t be able to get anywhere in the U.S.

“They’re going to be able to play rugby, get some really good competition, and they’ll be able to see what it’s like to play people who have really grown up around the sport,” he said. “So I think on the field we will just be exposed to a higher level of rugby, something that you don’t really see in the U.S.”

Some members are excited to have the opportunity to go on a trip of this caliber as a part of a club sport. Sophomore Matt Kempner, who joined the team last spring, said having the choice to go on this trip has been the highlight of his rugby career thus far.

“When I joined the team, I never would have thought I’d be able to do something like this,” he said. “This past semester we didn’t even have buses to take us to matches, because we didn’t have the funding, and now we’re going to Ireland. It’s going to be a great experience.”

The trip is being funded entirely by the players taking the trip.

While many players are looking forward to getting to know one another better and increasing team chemistry, Farrell hopes the trip will have more of an impact on the players outside of an athletic context. She said she thinks it is important for the team to have an opportunity to see another part of the world and that the memories and experience of the trip are as important as the rugby.

“For me, it’s less to do with what impact it’s going to have in a very short time frame of a rugby season and more to do with these are the kind of things that these guys are going to remember at 40 and 50 and 60,” she said.

Farrell said she hopes that in the future, the rugby team can be taking trips like the one they are taking to Ireland every three years so that every player that comes through is allowed the opportunity to travel abroad. Even if the trip does not exclusively go to Ireland, they would consider trips to other countries as well as on the west coast of the U.S. where there might be more competition. But for now, Farrell thinks this trip is a good starting point.

“People ask ‘Why are you going to Ireland?’ and the answer is ‘Why not?’” she said. “I think it fits really well with the culture of our team and that we’re trying to be the best possible rugby program we can. This is just a natural fit.”