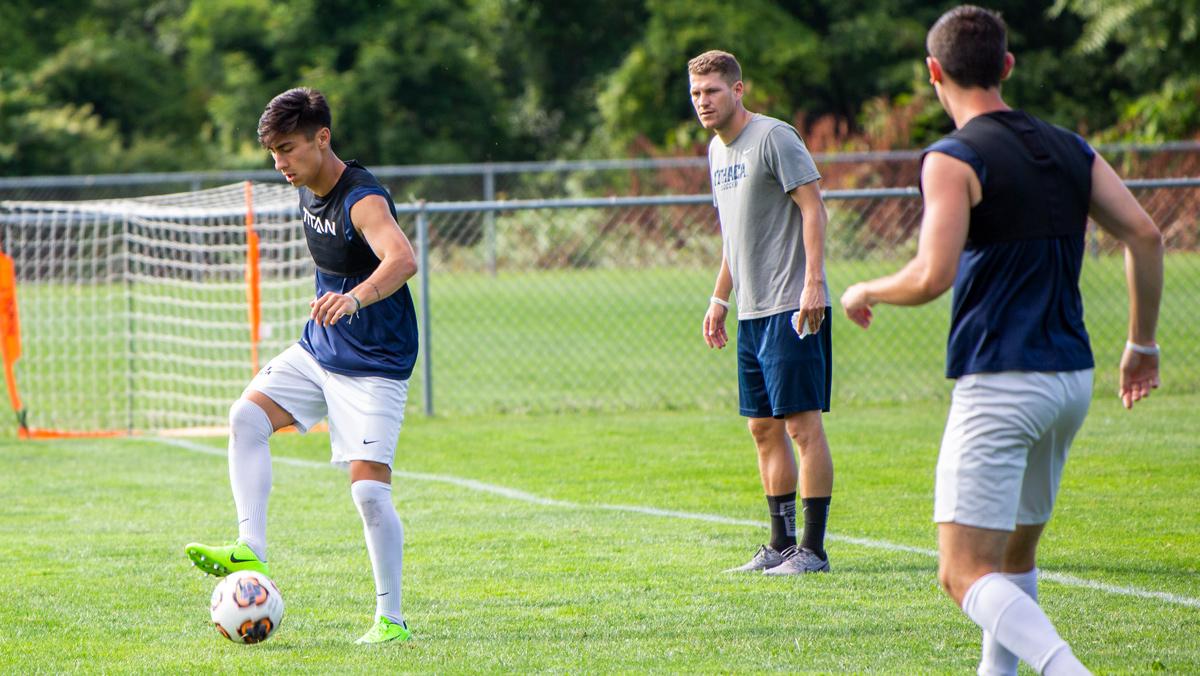 The Ithaca College Office of Intercollegiate Athletics announced May 7 that Garret Eldridge, men’s soccer assistant coach, has been hired as the new head coach for the Bombers.

Since arriving at South Hill in 2018, Eldridge has helped the Bombers to an overall 27–8–6 record. In 2019, the team ranked as high as No. 8 nationally, made its first NCAA appearance since 2008 and beat Keene State College in its first NCAA playoff game win since 2002.

Eldridge said one of the key aspects of the Bombers’ success was its winning mentality. He said that over the past two years, the team has had a saying: “Go 1–0 on the day.”

“Our guys have done an incredible job of really concentrating on each and every day individually,” Eldridge said. “Our goal will be to continue to work incredibly hard each day, and I think that will bring continued success.”

Eldridge began his collegiate soccer career at the Division I level at Siena College in his freshman year but then transferred to Division III Roanoke College where he was named to the Old Dominion Athletic Conference All-League team each year as a midfielder. After graduating in 2014, he played professionally in Australia for the Sunshine Coast FC Fire before coming back to the states in 2015 to assist Ursinus College’s men’s soccer program. He then assisted the men’s soccer program at Arcadia University. Eldridge said that he feels that his experience playing in college inspired him to be a coach at the Division III level.

“I really value the Division III experience where student–athletes can excel both on the field and in the classroom and can really grow as a person,” Eldridge said. “The opportunity to take over a Division III program as successful as Ithaca and to be part of an athletic department with such standards of excellence is awesome for me.”

Susan Bassett, associate vice president and director of the Ithaca College Office of Intercollegiate Athletics, said that Eldridge was temporarily placed in charge of the soccer program after Dezotell announced he was leaving and before the position was open for applicants. Hiring for the position was underway before the college froze all hiring processes as a result of the coronavirus pandemic. Eldridge said a new assistant coach has not been hired yet.

Freshman midfielder Christian Schaffner said that hiring Eldridge as the head coach seemed like the right choice for the program, especially considering the team’s spring season was canceled because of the coronavirus pandemic.

“He’s the one that knows the program best, and, considering the time, I just didn’t think it would be a smart move to go out looking for a new head coach right now,” Schaffner said. “I do think he’s the best person for it.”

Sophomore midfielder Owen Johnstone said that Eldridge being named head coach was a relief for a lot of the players who had concerns after Dezotell took the job with Tufts.

“I know people were stressed about a big change,” Johnstone said. “When you’re recruited to a program, even though things don’t always work out, you expect to have a coach for four years. With this pretty dramatic change happening, I think a lot of the guys were worried about having a stranger come in who doesn’t know them, didn’t recruit them and everything changing. But with [Eldridge] coming up, it’s sticking to what we know, and guys are excited to play with someone who was part of their recruiting process.”

Johnstone did not play in the 2019 season because of an injury but served alongside Eldridge as a student assistant. However, Johnstone said that he is returning to the field this season as a player and is excited to use the tactical knowledge Eldridge taught him as an assistant.

Both Schaffner and Johnstone said that Eldridge’s excitement for the sport is what sets him apart from other coaches.

“He is an energetic guy and was the one who brings the energy to the team,” Schaffner said. “Tactically speaking, he already made a lot of the decisions for our team last season, so I expect he’s just going to bring that same energy, same knowledge to next season.”

Eldridge said the team’s goal for the season is to play a competitive schedule that will help it grow on the national level.

“We understand the Liberty League is extremely tough, so, if we don’t win, we want to give ourselves every opportunity to be in the national tournament, and you do that by playing a competitive schedule,” Eldridge said.

Schaffner said that he has enjoyed seeing the Bombers’ program improve over the last two years that Eldridge has been part of the coaching staff.

“A couple years ago, no one knew who Ithaca College was for soccer, so I’m excited to keep putting our name out there,” Schaffner said.