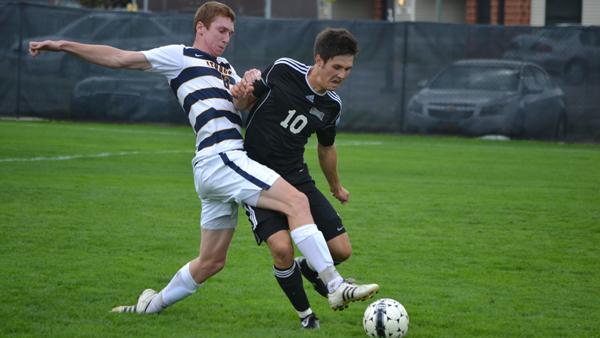 The men’s soccer team earned its first Empire 8 Conference win of the season with a 1-0 overtime thriller against Houghton College on Saturday at Carp Wood Field.  The Bombers extended their unbeaten streak to six and are 1-0-1 in E8 play this fall.

The game’s lone goal was scored with seven seconds remaining in the first overtime period. Sophomore midfielder Greg Hepper drove a low cross from the left flank across the box, and freshman midfielder Blair Carney was able to drive the ball into the back of the net on the opposite post. Carney scored his first career goal, and Hepper earned his second assist of the year.

The Blue and Gold had many opportunities to score during regulation, but Houghton junior goalkeeper Tyler Mastin made some big saves to keep the Highlanders in the game. The Bombers were able to outshoot Houghton 19-11, with 10 of those shots on target for the Blue and Gold. Carney said the team needs to focus on taking advantage of scoring chances in future games.

“We’ve got to finish,” Carney said. “We were so close on so many opportunities. We’ve just got to put those away.”

The South Hill squad controlled the majority of possession during the game, something Carney said the team has been working on in practice.

“Coach has us doing everything,” Carney said. “He’s got us working the ball from side to side, he’s got us playing the long ball, short ball, shooting, everything. We’re just working hard at every practice.“

This marks the third overtime in the last three games the Bombers have played. Senior captain Jack Shirley said making sure the team stayed focused helped the squad come out with the win.

“We really tried to push through and we were creating a lot of chances, so I think that was motivating our team and keeping us going as overtime carried on,” Shirley said.  “Our bench was lively and we had a lot of support coming from the back.”

Sophomore goalkeeper Jordan Gentile started in goal for the Bombers before switching with freshman Kenny Chapman at halftime. Chapman showed he is able to adjust to whatever role he is given by the coaching staff.

“I just go out and do my thing regardless,” Chapman said. “Obviously the scenario is different when you’re playing in the first half or second half, but I’m also going out there and playing as hard as I can and hope for the best.”

The Bombers will host Scranton at home in their next match at 4 p.m. Tuesday. Shirley said maintaining the momentum at home should help motivate the team to stay on its winning streak.

“It’s going to be a nonconference game, but we’re just going to play like every other game,” Shirley said. “This year we have a different feeling at home. We feel that we have something to protect here.”