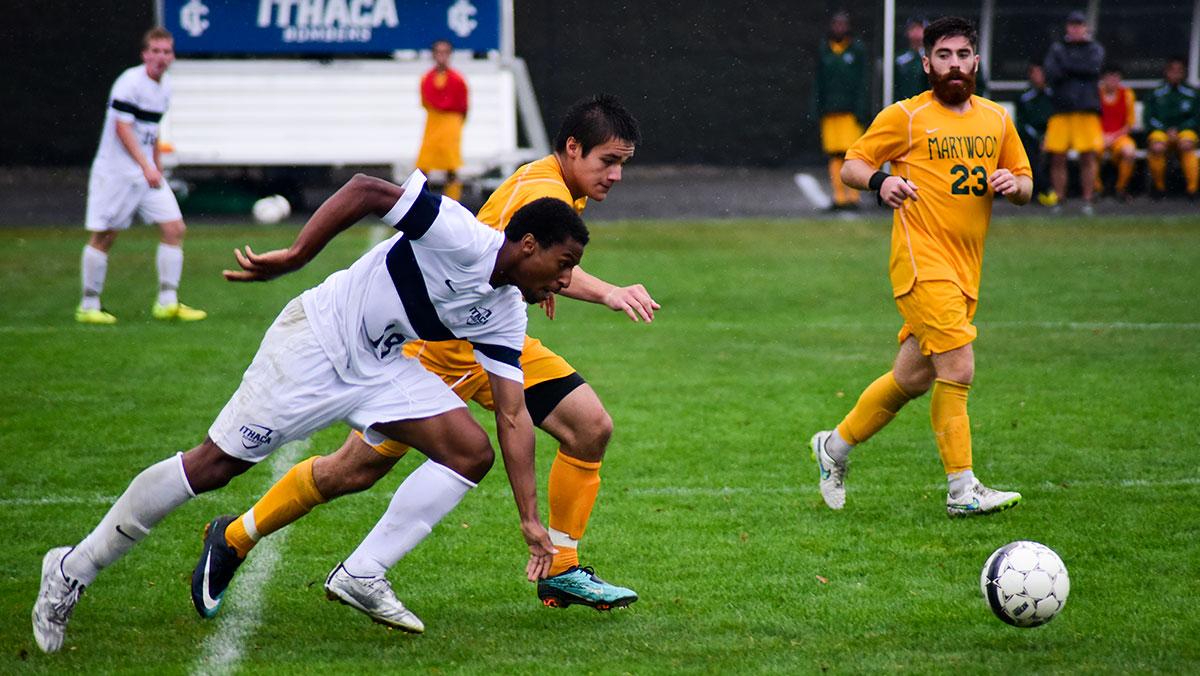 Jade Cardichon/The Ithacan
Junior midfielder Brandon Thompson chases after the ball against a Marywood University opponent during the men's soccer game Sept. 12 at Carp Wood Field. The Blue and Gold managed a 1–1 tie against the Pacers.
By Alex Wong — Staff Writer
Published: September 13, 2015

It was another game enduring the poor weather for the men’s soccer team as it looked to improve on its 0–3 start to the season against non-conference opponent Marywood University, which came into the match at 1–1–1.

The rain created a fast, slick pitch, leading to lessened ball control for each team.

Throughout the start of the match, it was a battle of possession in the middle of the field as neither team could get its offense started.

The Bombers found a breakthrough with about 36 minutes to go in the first half as junior midfielder Scott Halpern was fed in front of the goal by fellow junior midfielder Brandon Thompson. Thompson chased down the ball on the left flank to keep possession before whipping a pass across the face of the goal to Halpern, who volleyed it home to put the team up 1–0.

The Bombers had success pushing the Marywood backline along the sides of the field as Thompson and junior forward Sean Forward made threatening runs looking to cross the ball into the box.

Head coach Patrick Ouckama said he is impressed by the duo’s play out wide.

“They are very hard-working players. They both bring a lot of speed and a lot of one-on-one ability, so we look to capitalize when they have time and space, and whenever we can get them into one-v-one situations, we look for it,” he said. “I can’t say enough about their work ethic and what they bring on both sides of the ball.”

As the rain started to come down harder, the play on the field got rougher.

Marywood senior Daniel Hull and Bombers freshman defender Sam Factor were locked up in a battle a few times, and Thompson was on both the giving and receiving ends of physicality along the left wing.

Thompson and senior defender Joseph Dobbins were each shown yellow cards before the half ended as the chippy play continued until the referee’s whistle signaled for the end of the half.

The beginning of the second half was marked by strong play from the Bombers’ defense as Marywood upped its offensive intensity.

It was the Blue and Gold, however, with the better looks that they could not convert on, as Forward put too much on a cross into the box intended for freshman forward Jose Contreras, and senior defender Jordan Filipowich saw his header go just wide to the left of the goal.

With 28 minutes to play, the Bombers found another chance as the Pacers’ senior goalkeeper Justin Sunseri misplayed a ball in the box before Dobbins’ long chance from the left wing just missed the post as it headed out of bounds to the right of the net.

An unfortunate moment for the Bombers came shortly after, as Dobbins went for a slide tackle with the studs of his cleats up. As he had already been booked earlier in the match, his second yellow of the game led to a red card and his subsequent ejection.

Ouckama said he liked how his team battled a man down for an extended amount of time.

When asked his opinion on the red card, Ouckama said he did not see the play and could not make a comment on it as a result.

After Dobbins was shown off the field, a Bomber handball in the box led to a Marywood penalty kick, which Hull converted to level the score at 1–1 with under 20 minutes to play.

The goal and man advantage seemed to shift momentum in Marywood’s favor as the team continued to press forward in hopes for a winning goal.

Despite giving up the lead and a potential win, Ouckama said he liked what he saw out of his team against a tough opponent.

“They came out with a lot of good energy. They put a lot of pressure on Marywood,” he said. “Marywood is a good team. They had some speed. They had some physicality, but we came out and matched that, got in for an early goal, and it was good to play with a lead for a while.”

The 1–1 draw puts the Bombers record at 0–3–1 as they begin conference play against Utica College at 1 p.m. Sep. 19 at Carp Wood Field, searching for their first win of the season.