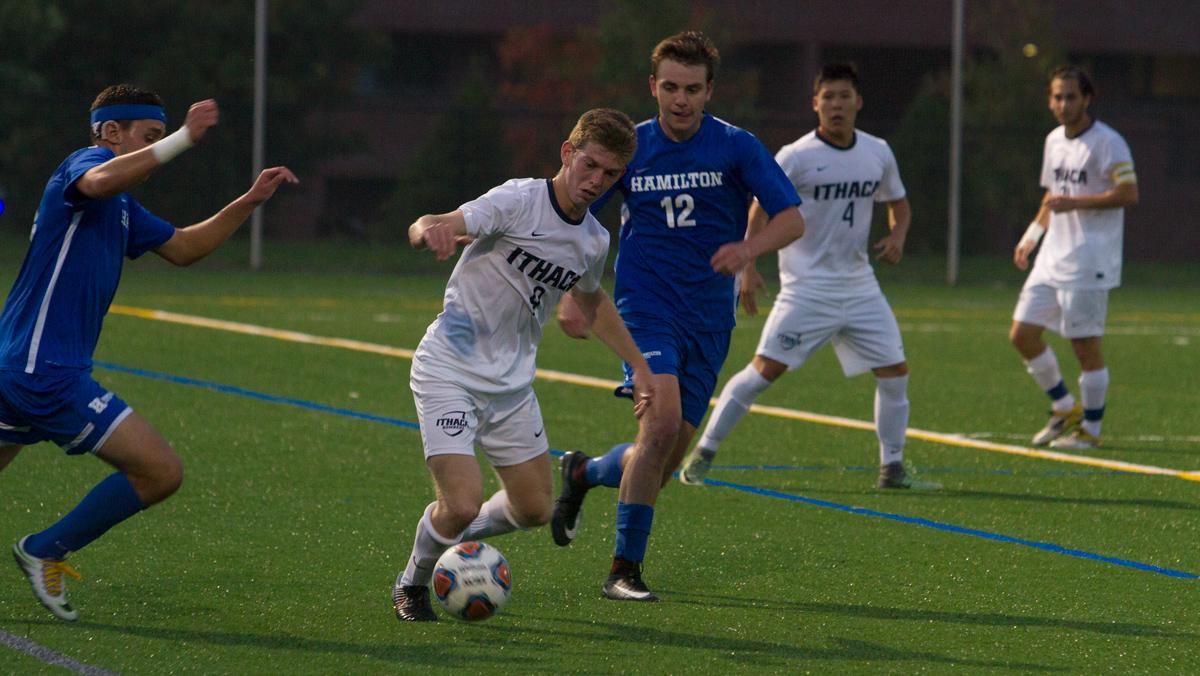 CLARA MONTAGUE/THE ITHACAN
Sophomore forward Max Barish gets control of the ball as sophomore forward Aiden Wood of Hamilton College tries to come behind him and get the ball.
By Cal Dymowski, Jason Hannigan — Staff Writer and Contributing Writer
Published: September 16, 2017

The Bombers, now 3–2–1 on the season, wasted no time getting on the board when junior forward Nate Mansfield picked up a rebounded shot and tapped it home for an early 1–0 lead just four minutes into the match.

The South Hill squad had a chance to double their lead in 13th minute, when a free kick from sophomore midfielder Jack Ochs found the head of senior defender and captain Eric Hepler, whose shot ricocheted off the post and out.

Three minutes later, a through ball gave Hamilton a one-on-one opportunity with goalkeeper Max Lichtenstein, who preserved the Bomber lead after charging out of his goal and making a kicksave.

The two squads exchanged possession and shots for the remainder of the half, and the Blue and Gold went into halftime with the lead.

However, four minutes into the second half, junior forward Matt Casadei equalized for Hamilton, heading home a cross from sophomore forward Jeffrey Plump.

Shortly after the goal, head coach Kyle Dezotell subbed off Lichtenstein and replaced him with senior goalkeeper Dan Hinckley.

Dezotell said after the game the decision was due to a injury to Lichtenstein.

“That wasn’t a tactical decision,” Dezotell said. “Max has had a bad hamstring for the past couple weeks. He tweaked it again in the first half.”

Dezotell said he had planned on giving Lichtenstein the next fews days off, but has confidence Hinckley can play between the posts.

Following the substitution, Ochs found himself at the right place at the right time, as the sophomore ripped home a shot from outside the box that deflected of the post and in for a 2–1 Bomber lead.

Hamilton would go on to score the game-winner in the 65th minute when a corner kick from sophomore defender Luke Eckels caused a scrum in the box, only for sophomore forward Jefri Schmidt to knock it home.

Dezotell said after the game he felt while Hamilton played well, the Bombers were their own worst enemy.

“We could have won that game,” Dezotell said. “I think when we look at the video, we’ll see that we beat ourselves. The goals they scored clearly came off mistakes we made.”

The team will look to refocus itself with Liberty League action starting in ten days, Dezotell said.

The Bombers are back in action at 7 p.m. Sept. 19 when they travel to Aurora, New York to face Wells College.

Weekend preview: Bombers look to get back on top