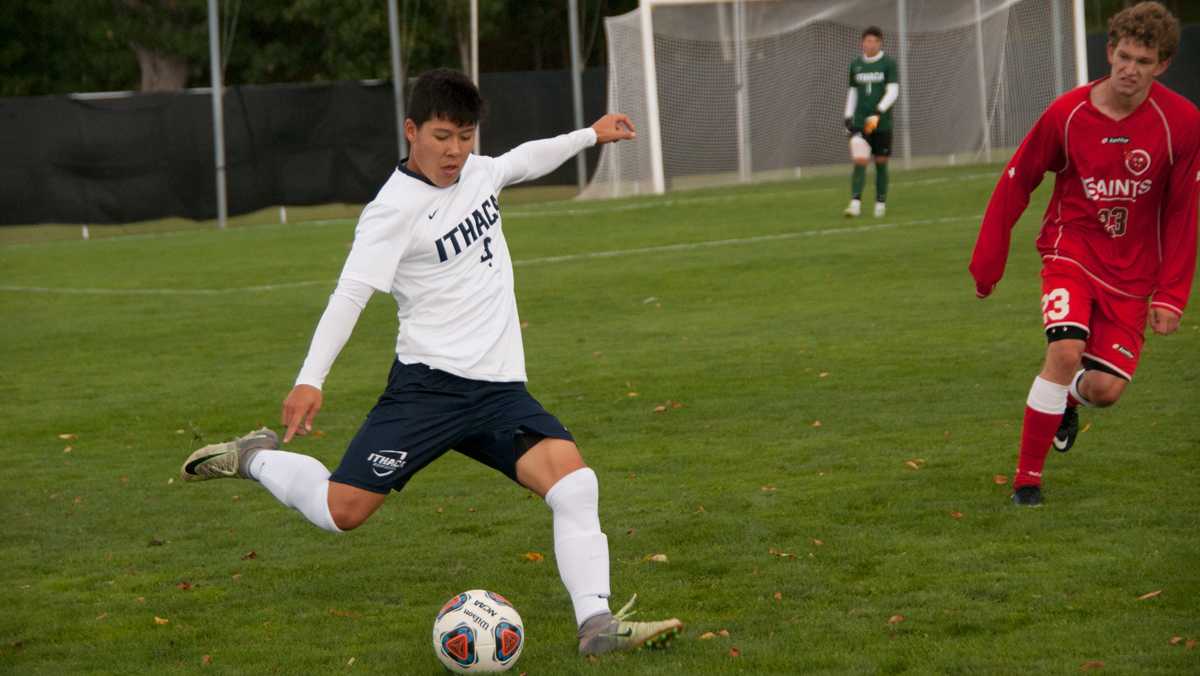 It was a back-and-forth start to the contest, and both teams had a fair share of scoring chances early on.

St. Lawrence nearly went ahead just minutes into the game.

Lichtenstein stood tall to Kelly in the 8th minute, after the Saints countered a Bombers corner.

The Bombers struggled throughout the half, and the game, to put their own scoring chances away.

Junior Nate Schoen found himself unmarked inside the Saints’ penalty area in the 12th minute, but the midfielder’s shot went just wide of the goal.

Perhaps the Bombers’ best chance of the half, came in the 29th minute when freshman Luke Karen headed down a ball to junior forward Jose Contreras. Contreras’s shot from directly in front of the net sailed just over the bar.

St. Lawrence eventually struck first off of a header in the 35th minute.

The Saints’ lumbering 6”6’ junior defender Stephen Dorney rose up above the Blue and Gold’s backline to head the ball past the Bombers’ keeper. Lichtenstein could only watch as the ball nestled in the bottom corner.

Sophomore defender Tom Dillmann was issued the game’s first yellow card in the 37th minute for bringing down a Saints player. St. Lawrence nearly capitalized on the ensuing free kick when Dorney had another free header that went into the side netting.

Both teams had their fair share of chances in the first half, but ultimately it was the visitors who capitalized on one of their scoring opportunities.

The second half picked up where the first left off, with both sides sharing spells in possession and trading scoring opportunities. The Bombers looked eager to find an equalizer, and the home side came out flying from the first whistle.

Karen weaved his way in on goal and had his shot parried out for a corner in the 51st minute. On the next play, senior captain Eric Hepler leveled the score on the ensuing corner with a thumping header past the Saints’ keeper.

The goalscorer had high praise after the game for junior midfielder Zach Lichtman, who dished Hepler the assist.

“Zach served the perfect ball to the front post, and I was able to connect with it,” Hepler said.

Hepler nearly added to his tally in the 58th minute when his shot from atop the Saints box skimmed past the post.

After averting several Bombers attacks, the visitors regained some of their earlier momentum.

Trailing, head coach Kyle Dezotell was forced to make a change and go with three defenders in the back to add an extra player to the attack. The Saints took advantage of the mismatch in the Bombers’ backline and put the game to bed with four minutes remaining.

Kelly finally got the better of Lichtenstein, sliding his shot past the sprawling Ithaca keeper.

Despite the loss, Dezotell had no shortage of praise for his keeper, who made his return from injury.

“It was great to get Max back today,” Dezotell said. “He just gives the team confidence.”

The Bombers, who hung around and even dominated several spells throughout the game, are still searching for their first win in the Liberty League. Dezotell acknowledged there is work to be done before Hobart College visits Oct. 4.

“The biggest thing for us is scoring goals,” said Dezotell. “Hobart is going to be good, but we have shown that it does not really matter who we are playing; we are going to be close.”

The South Hill squad is back at home at 4:30 p.m. Oct. 4. The Bombers will welcome Liberty League foe Hobart to Carp Wood Field.