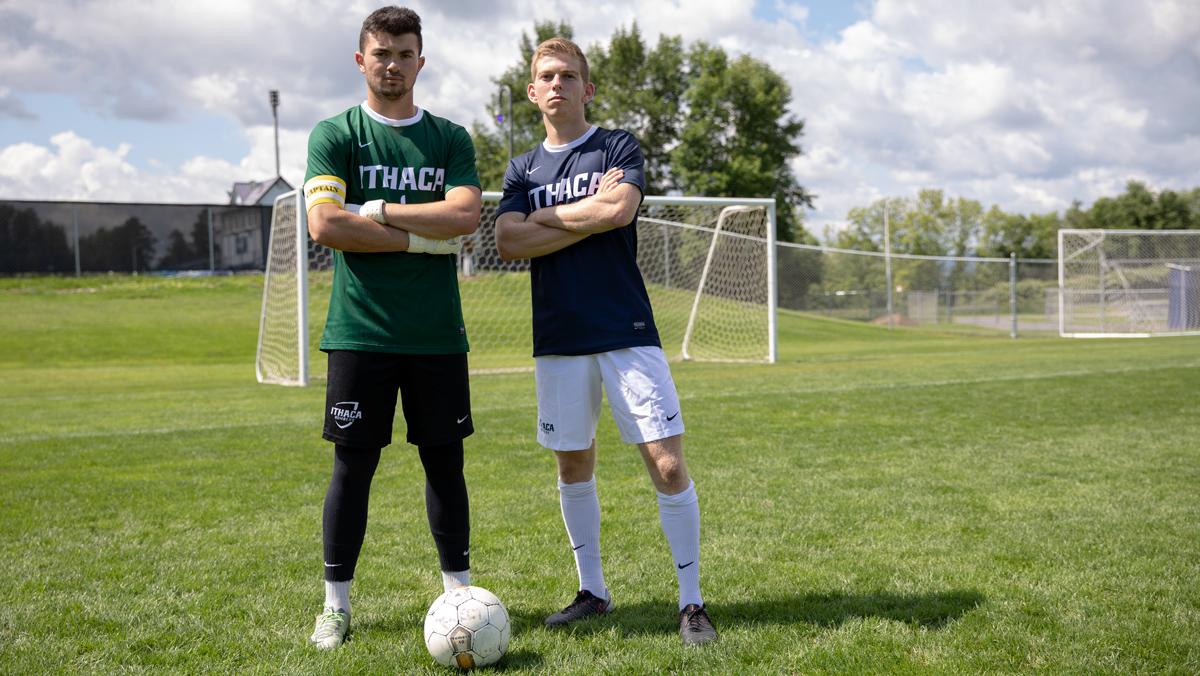 With a year of playing in the Liberty League Conference under its belt, the Ithaca College men’s soccer team is hoping to score big in the conference this season.

Head coach Kyle Dezotell took charge of the program in June 2017, directing the team to a 2–6–1 record in its inaugural Liberty League campaign. The Bombers finished eighth in the 10-team league with a winning percentage below .500 — a record that the team hadn’t fallen too since 2010.

Last season, the Blue and Gold finished with a 3–5 record in home games. Junior forward Max Barish said that the team can improve its success in 2018 by winning important games at Carp Wood Field.

“I think one thing we really focused on [in the spring] was coming out of halftime stronger,” Barish said. “I also think making sure we take care of business at home, using that home–field advantage, is important. I know a lot of our important Liberty League games are at home, so if we can use our home field and fans, I think we will make improvements.”

Last season, junior midfielder Kevin Turi was sidelined with an ACL tear, while senior captain Jack Monnes missed the Bombers’ campaign with a broken foot. Both Turi and Monnes are expected to play meaningful minutes in the midfield this year, with Monnes bolstering the center of the field alongside senior Nate Schoen.

Barish said he is relishing the service that both Turi and Monnes will bring to the field. Barish notched five goals last season, finishing second on the team behind senior striker Nate Mansfield.

“Having Kev and Monnes back is great for our team,” Barish said. “They are weapons. It was tough seeing those guys sitting and not able to play, but they have been working hard in the offseason, and now we’re going to see all the hard work they’ve put in pay off.”

Along with Turi and Monnes, junior goalie Max Lichtenstein suffered from a season-ending concussion. He said that if the South Hill squad can stay injury free, it will help them to potentially win the conference.

Together, Barish and Mansfield scored 11 of the Blue and Gold’s 32 goals last season. Mirroring his coach, Barish said the team has adopted Dezotell’s forward-thinking mentality, working tirelessly in both the spring and preseason to improve its transitioning to goal.

“One thing that my teammates and I have been working to improve on is thinking two steps ahead instead of one,” Barish said. “Doing so will help with not only our spacing and positioning on the field, but I think it will help create more opportunities for us going forward.”

Looking ahead, the Bombers will play on the road for four of their first five games this season, with the South Hill squad opening at Alfred State College on Aug. 31. Dezotell and his team will face another test four days later, with the Bombers squaring off against rival, SUNY Cortland.

Opening the season against Cortland, the team that recently checked in at No. 23 in the United Soccer Coaches preseason poll, may be seen as daunting. Lichtenstein, however, said the team welcomes the challenge.

“I think being on the road builds character,” Lichtenstein said. “I think it’s a good thing we are starting off with such a heavy road schedule. That means, if we are successful right away, we’ll have a bunch of home games that are meaningful at the end of the season.”