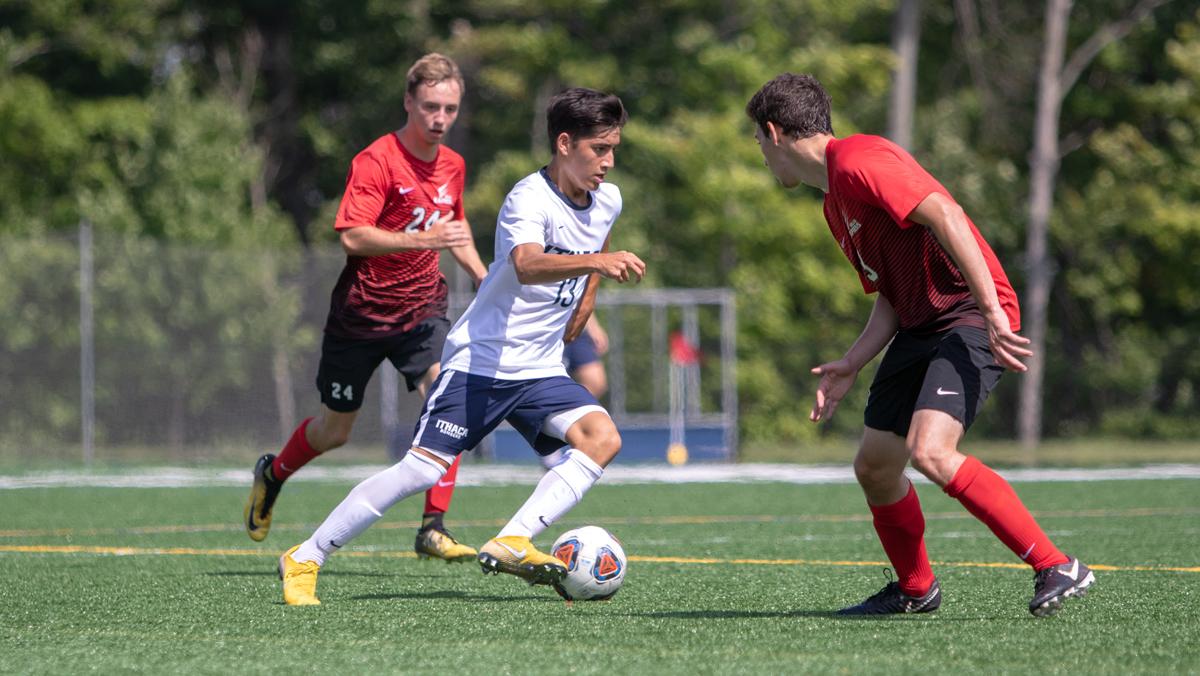 PHOTO ILLUSTRATION BY CONNOR LANGE
Freshman midfielder Alex Leahy cuts between two Wells College defenders on Sept. 7. The Bombers won the match 2–1 in overtime, and have played five overtime games so far this season, with a record of 2–0–3
By Emily Adams — Staff Writer
Published: October 2, 2018

When the final buzzer sounded after 90 minutes of regulation time at St. Lawrence University on Sept. 29, the Ithaca College men’s soccer team knew what to expect as it prepared for its fifth trip into overtime this season.

For having so many close games, the Bombers have a remarkable record of 6–0–3. Two of their six wins came during overtime, and two more were won in regulation by just one goal. The record is their best since 1999, and their national ranking of No. 20 marks their first time in the Top 25 since ’08.

In the Fall 2017 season, which was head coach Kyle Dezotell’s first year at the college, the South Hill squad had a record of 7–8–2. Its eighth–place finish out of 10 schools in the Liberty League was disappointing for the program, so Dezotell entered this season looking to make some big changes. He brought in a recruiting class of 15 players, making nearly half the team freshmen students.

“That was me wanting to quickly shift the talent level and the culture in the group,” Dezotell said. “I took over in the summer [of 2017], so they were my first recruiting class. I just wanted to put my stamp on the program.”

Dezotell’s stamp has been positive so far. The freshmen have already begun to make an impact on the team. They have scored two of the Bombers’ 13 goals and are responsible for two out of eight assists. Senior striker Nate Mansfield believes the young group has brought up the energy of the whole team.

“The new guys that came in really boosted us,” Mansfield said. “Our practices have become a lot more quality than in the past — there’s a lot more discipline.”

Dezotell said he believes having such capable freshmen has made the squad well-rounded and has kept the team competing in its lengthier games.

“We have a lot of depth,” Dezotell said. “We’ve played around 20 players each game, which is a big number, so when we go into overtime it’s not like our players have all been on the field for 90 minutes.”

The Bombers have 21 players on their roster who have seen the field in at least half of their nine games so far, and six of those are freshmen. The two colleges the Bombers have defeated in overtime, Hamilton College and Wells College, each have only 19.

Mansfield has netted the overtime goal in both of the Bombers’ post-regulation wins, but he attributes those victories to the amount of strength behind him on the field.

“I don’t do it alone,” Mansfield said. “Our defense has really stepped up their game, and we have probably the best midfield in the Liberty League. I’m just in the right place at the right time.”

The Bombers’ defensive prowess has also been a factor in keeping games close. In the Liberty League, they are the No. 1 ranked team in goals allowed, ceding only four to their opponents. Junior goalkeeper Max Lichtenstein emphasized how critical the role of the back line has been.

“We know that we’re good, and we’re really strong in rarely conceding chances,” Lichtenstein said. “We’re very consistent in the back. As a team, we just have to keep improving on goal scoring.”

Above all, a change in mentality has been the biggest turning point for the South Hill squad this year. Dezotell introduced his players to a new mantra, “1–0 today.” The saying hangs in a frame front and center in his office.

“‘One–0 today’ is just a way to really simplify things, and we mean it in everything we do,” Dezotell said. “When we train, we just want them to go 1–0 on that day, and at the end, the product will hopefully be winning games. All we can control is today and making sure we get better each and every day. I say “1–0 today” because we don’t just want to be good — we want to win today.”

Its spotless record shows the team has truly bought into this mentality, and many of Dezotell’s players believe it has been a big factor in its success. Lichtenstein sees it as a way to keep the team focused in the moment.

“[Last season] we were thinking too much about the future and the past,” Lichtenstein said. “We just need to have a great day at a practice or game and stay tuned in to where we are right now. That mentality has really been good for the team.”

Freshman defender Thomas Pierce believes keeping the phrase in mind has been crucial to keeping the team mentally strong during tight matches.

“Our team refuses to give up,” Pierce said. “We give everything we have for 90 minutes every game and more when we have to. We just try to win every day and focus on the task at hand.”

The Bombers’ strong start has given them big hopes for the future, but Dezotell is making sure his players don’t get ahead of themselves.

“We think we can beat any team we play,” Dezotell said. “We just take everything on one day at a time, and I hold the guys to that, but we absolutely should be a playoff team and competitive to win the conference at the end.”