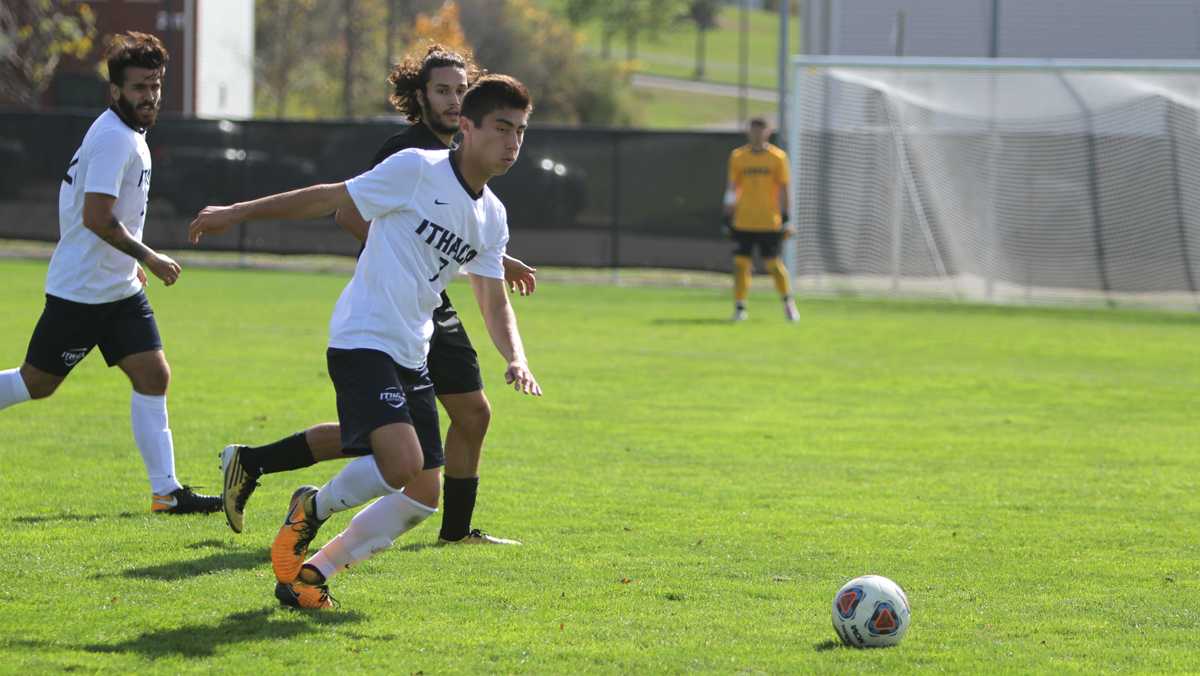 The Ithaca College men’s soccer team concluded their three-match homestand with a convincing 5–0 win over visiting Bard College at Carp Wood Field Oct. 7. The Bombers are now 5–5–1 in their inaugural Liberty League.

Senior Eric Hepler got the Bombers rolling early in the 2nd minute. Hepler found a seam in the Bard backline, turned and calmly slotted his shot past senior goalie Taylor Bond.

Hepler, who went on to bag two goals on the day, said he is enjoying his switch from the backline to the wing.

Junior Nate Schoen nearly added to the Bombers’ lead minutes later. Bond’s fingertip save was enough to force the Bombers a corner.

Schoen would get redemption on the very next play. He pounced on Bard’s failure to clear their area and finished past Bond.

Freshman Luke Karen got in on the action in the 16th minute. Karen’s bicycle kick drew reaction from both the crowd on hand and Bond, who was forced to make a reactionary save to keep the score 2–0.

Overall, the Bombers were in control for much of the first half, maintaining large spells of possession and creating the more threatening of chances.

The Bombers’ young central midfield, anchored by Schoen and comprised of freshmen Duncan Schnur and Karen, dominated the half and forced Bard to go the long route. The visitors tried forcing many chances, electing to launch the ball over the top of Ithaca’s backline. Schoen said both Schnur and Karen stepped up on the day.

“We needed them to step up, and they did,” said Schoen. “They both played really well today.”

The freshmen contingent drew plenty of praise from Schoen and Hepler.

“Before the game I went up to [Schnur]. I said ‘today you’re not a freshman,’” said Hepler. “He stepped right up and took care of what he had to do.”

Head coach Kyle Dezotell was also pleased with the performance of Schnur, in particular.

Another freshman, Drew Cohn also looked primed to get on the scoresheet. Cohn nearly finished off his streaking run two minutes into the second half. His shot was saved in the end by Bard’s keeper.

Hepler added to his tally in the 50th minute. The senior dribbled into Bard’s penalty area, picked his spot, and finished past Bond. Hepler celebrated his goal by running to the side to embrace his parents.

Junior Nate Mansfield made it four just a minute later. Mansfield’s curling effort in the 51st minute nestled in the bottom corner.

Sophomore Justinian Michaels capped off a strong offensive performance for the home side, converting from the penalty spot in the 78th minute.

Dezotell said he believes his team has consistently showed they can compete with anybody in the league.

“Three points is great,” said Dezotell. “Now it is time to start to climb the table.”

Up next for the Bombers is an away league match against Skidmore College at 4 p.m. Oct. 13. in Saratoga Springs, New York.