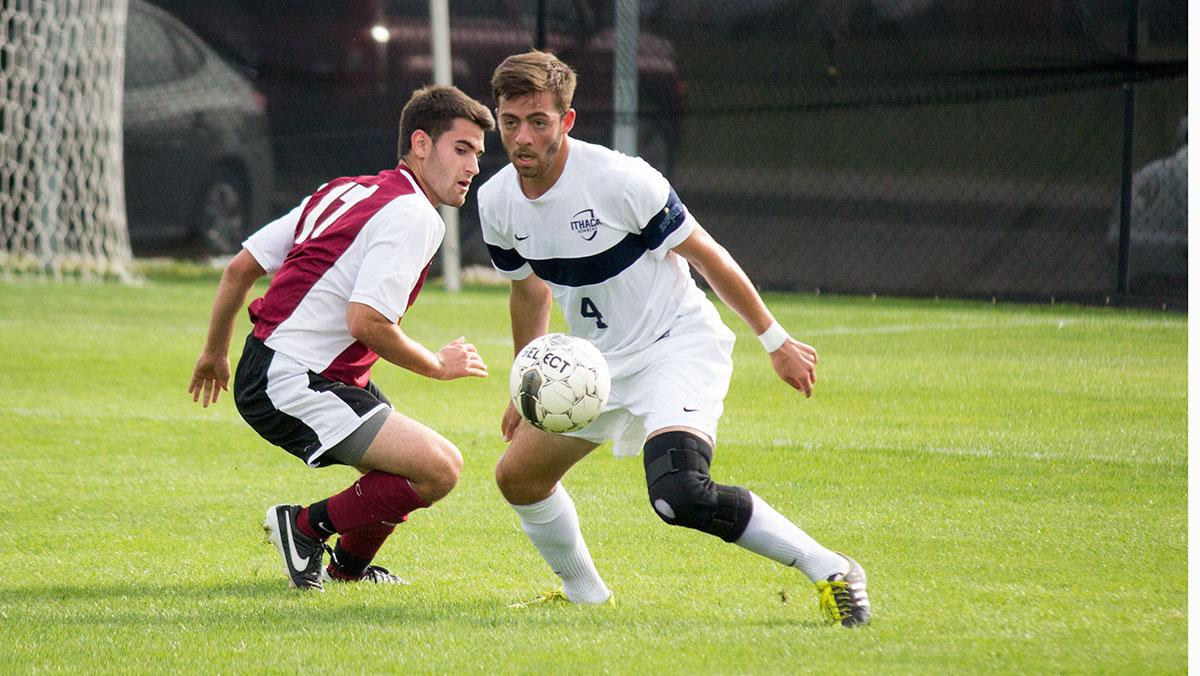 The men’s soccer team stayed undefeated in the Empire 8 on Sept. 26 with a 2–1 victory against a winless St. John Fisher College. The squad came into the game looking to rebound from a 1­–0 loss in overtime to the University of Scranton and tack on a second conference win to their 1–4–1 record.

The Bombers attack was energetic right off the bat, holding possession and challenging the Fisher defenders often.

Soon after it was junior forward Cobi Byrne with another chance, curling a shot from the left side across the face of the goal only to find the post as well.

Fifteen minutes through the first half, the Bombers were finally able to find the back of the net. Senior back Joseph Dobbins put a corner kick into the box, and after the ball was knocked around it fell to senior forward-and-back Jordan Filipowich, who smashed it home, giving the Bombers a 1–0 lead.

The duo of Thompson and junior midfielder Scott Halpern kept the tempo up throughout the first half, holding possession on the offensive end and taking away the short pass on defense, forcing Fisher into long bombs down the field that were either chased down by Bomber defenders or snuffed out by junior goalkeeper Zach Jacobsen.

Thompson doubled the lead 25 minutes into the first half, taking a cross from junior forward Sean Forward and putting a hard shot past Fisher freshman goalkeeper Joseph Catalfamo.

Thompson said afterward that he was not too sure the ball would go in given the tough angle he had to work with.

“Sean made a real good run down the line, beat a whole bunch of players, I just happened to be at the right place at the right time,” he said. “Kind of a weird angle, but it went in. I’m not going to ask any more questions about how it went in, but I’ll take it.”

The score remained 2–0 to the Bombers heading into the half.

The second half was more even in terms of possession, and Fisher made good on its their increased time with the ball. Jacobsen came off his line and out of the box to try and play a long ball, running into Fisher’s sophomore forward Jake Gentile. Gentile regained possession, and with Jacobsen far out of his net, tapped it in to cut the Bombers lead to 2–1.

Jacobsen said he came out early to collect the ball thinking it would roll more and got caught out of position.

“I came into the tackle soft and after that I kind of lost the ball and started backpedalling, and it got worse from there, but just kind of a foolish mistake on my part,” he said.

The physicality ramped up as As the game wore on. Thompson was on the receiving end of a hard foul following a non-call against the Blue and Gold in the middle of the field. He seemed to take the majority of the punishment throughout the game as he played past along the left flank, constantly causing headaches for Fishers’ midfielders and defenders on his side of the field, both with his threatening runs toward the goal and his stout defending.

Head coach Patrick Ouckama said he had plenty of praise for Thompson’s play.

“He’s a dynamic player. His speed and his athleticism bring a lot to the table and he’s someone that opposing teams look out for, and rightfully so,” he said. “We try and get him into an area where he can run into space, or where he’s in some one-v-one situations, and that kind of remains the same every game because that’s his strong point.”

On the physical play, Thompson said it was a product of the tight score and emotions running through each side.

“It got pretty scrappy at the end. I think they were just frustrated,” he said. “As the clock ran down they were getting more and more frustrated searching for a win, but I think we held up pretty well at the end there even though it wasn’t too pretty. It’s how games get, emotions run high.”

Throughout the final 15 minutes, neither team had very many chances to add another goal as they fought for the ball in the middle of the field and sent in long passes that were out of the reach of their attackers. Fisher scrambled for a game-tying goal in the final minute, but in the end the Bombers held on for the 2–1 win, outshooting Fisher 19–9.

The team gets back to action when Hobart College visits the Bombers at 4 p.m. Sept. 29 at Carp Wood Field.