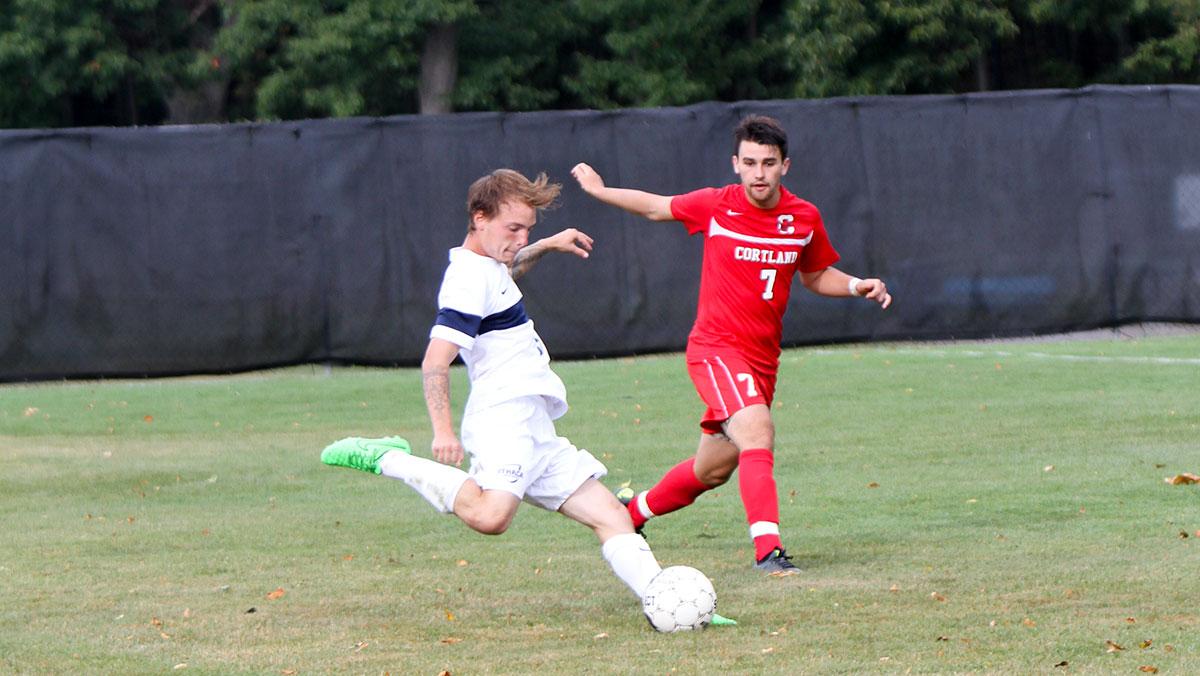 On a wet, mucky afternoon, the men’s soccer team took on nationally ranked SUNY Cortland in its 2015 home opener Sept. 9, losing the matchup by a final score of 3–2.

The South Hill squad, which has been trying to get out of its early season offensive rut, continued its inconsistent play against the Red Dragons.

The Cortland rivals opened the game scoring 10 minutes into the first half. Daniel Friend of the Red Dragons scored on a penalty kick, following an illegal tackle, making it 1–0 Cortland.

The Red Dragons dominated the first half from that point on, defensively shutting down the Bombers who only registered four shots in the first half of play and seven for the game.

The Bombers first-half struggles were also seen on the defensive side of the ball.

Consistently throughout the first half, the forwards from Cortland marched up the field with ease, making the starting goalkeeper, junior Zach Jacobsen, very busy throughout the game.

With 13:32 remaining in the first half, Cortland’s Drew DeJohn scored the Red Dragons’ second goal of the game. Making a nice move on senior back Joseph Dobbins, DeJohn went in alone on Jacobsen and scored easily, letting Cortland go up 2–0.

With fewer than five minutes to play in the first half, the Bombers committed yet another penalty in the box, and Cortland’s Nick Tata scored the Red Dragons’ second penalty kick of the game to make it 3–0.

Senior Brandon Thompson said the team is better than what it put out there.

“It’s unfortunate,” he said. “We can beat this team, but we can only go up from here.”

The Bombers did end what was a poor first half on a high note.

In the final minutes, freshman forward Jose Contreras scored on a rebound in front, giving the Bombers their first goal of the game and his first career goal.

Jacobsen said despite ending that first half well, the team has to stop the ongoing trend of first half struggles.

The second half started off with a bizarre play as junior Sean Forward missed a wide open header off a rebound shot from Thompson. Seconds later, Thompson battled with a Cortland defender only to have the shot hit the crossbar, but later called a goal cutting the Cortland lead to 3–2.

The Thompson goal seemed to spark an attempted comeback as the Bombers began to dominate the play midway through the second half.

At some point, the South Hill squad was physically outplaying Cortland, while also taking advantage of the multiple missed corner kicks by the Red Dragons.

However, it was too little too late, as Cortland starting goalie Joe Brandofino and junior Aziz Farouk engaged in a foot race for the ball with an empty net that Brandofino swiped away.

Farouk said it’s a long season and that a loss like this will help the Bombers moving forward.

“There are new guys and a new coaching staff,” he said. “I feel like that we’re moving in the right direction. The comeback was great, but we all feel we should have won.”

The loss put the Bombers on a 0–3 start to begin the 2015 campaign. The Bombers will return to Carp Wood Field for their next game at 3 p.m. Sept. 12 against Marywood University.