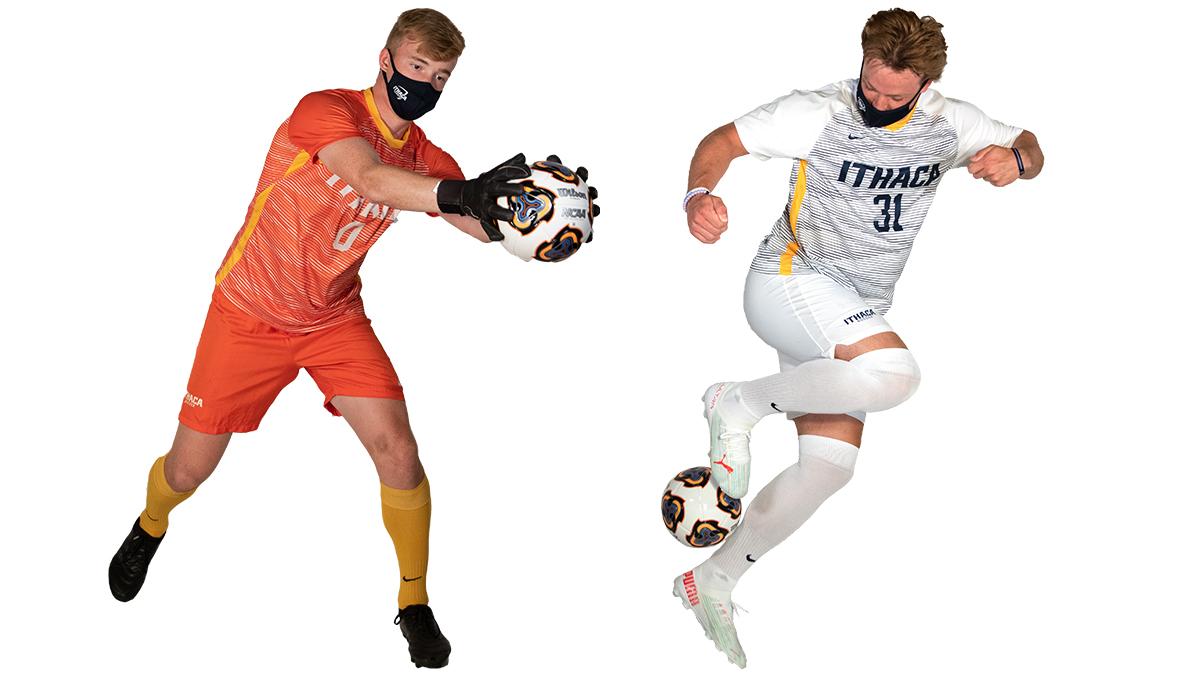 The Ithaca College men’s soccer team is set to return to action with a new coach at its helm and a group that is determined to win a national title. The squad is eager to return to the pitch after its championship pursuit was put on pause by the cancellation of the 2020 season.

The team named Garret Eldridge its new head coach in May 2020, after serving as an assistant coach for two seasons. Senior goalkeeper and captain, Lee Folger, said he believes that Eldridge’s approach to coaching will help the team reach its full potential.

“Garrett [Eldridge] is unbelievably energetic, unbelievably positive and he’s someone that quite frankly just makes you want to play soccer,” Folger said. “I think his enthusiasm, his constant transparency with us about what his goals are, his coaching style, all of it lends itself towards our group.”

Eldridge said he is looking forward to beginning his first season as the head coach, particularly because of the skills and energy that this team brings to the table.

“I think we return a really talented group, a group that in 2019 went to the round of 32 in the NCAA tournament,” Eldridge said. “So, we’re incredibly excited to see where we go with the season. And then on top of that — not having played games last year — we’re just excited to be back together as a full group and back competing again on the field.”

The Bombers made their presence known in 2019, posting a 13-6-2 record to earn its first NCAA Championship appearance since 2008. Several impactful players from this squad will return in 2021, including senior midfielders Alex Leahy and Theo Scott and senior captain and striker Jonathan Kyriakidis.

Scott led the team with eight goals in the team’s most recent season, placing the midfielder at No. 5 on the Liberty League leaderboard for goals scored. The senior also displayed his ability to perform in the clutch, with four game-winning shots.

The team will rely on its senior class to help lead the way this year because defenders Colin Shust and Luke Bugoni were also named captains.

This motivated group already has high expectations from coaches around the U.S., because the program was ranked at No. 23 by the United Soccer Coaches preseason poll –– a poll that ranks the top 25 teams in the country. The South Hill squad also received the same ranking at the end of the 2019 season.

In order to maintain these high expectations, the team continued to train through its hiatus, despite the canceled 2020 season. Folger said that completing workouts was a challenge at times for these athletes because most of the group was unable to compete against other players during the pandemic.

To keep the team in shape, the coaching staff developed a competition in which players reported the number of workouts and training activities they completed each week. As a goalkeeper, Folger said it was difficult to stay prepared throughout last summer, but felt that the competition helped him stay engaged with his training.

“When you don’t have someone to shoot on you or someone to help walk you through drills, it’s definitely unique,” Folger said. “But I think as a team, we actually did a really good job, across last summer and into this one as well, with offering support.”

Folger also said that as COVID-19 vaccination rates increased, players had more opportunities to compete in summer leagues. This helped players get closer to game shape with the 2021 season quickly approaching.

This fall’s schedule includes 18 games, comprising nine non-conference matchups. Eldridge said he believes that this season’s slate will challenge his team and make for an entertaining season.

Shust said he believes that the college is prepared for the challenge that this competition presents. He also said the team will approach the season one game at a time as it works towards achieving its ultimate goal of becoming national champions.

“You can expect a lot of positive energy, hard work and just that mentality that they have to win today,” Shust said. “And we’re going to go 1-0 on the day every day.”

The Ithaca College men’s soccer team will return to action against Medaille College at 7:30 p.m. Sept. 1 in Buffalo, New York.