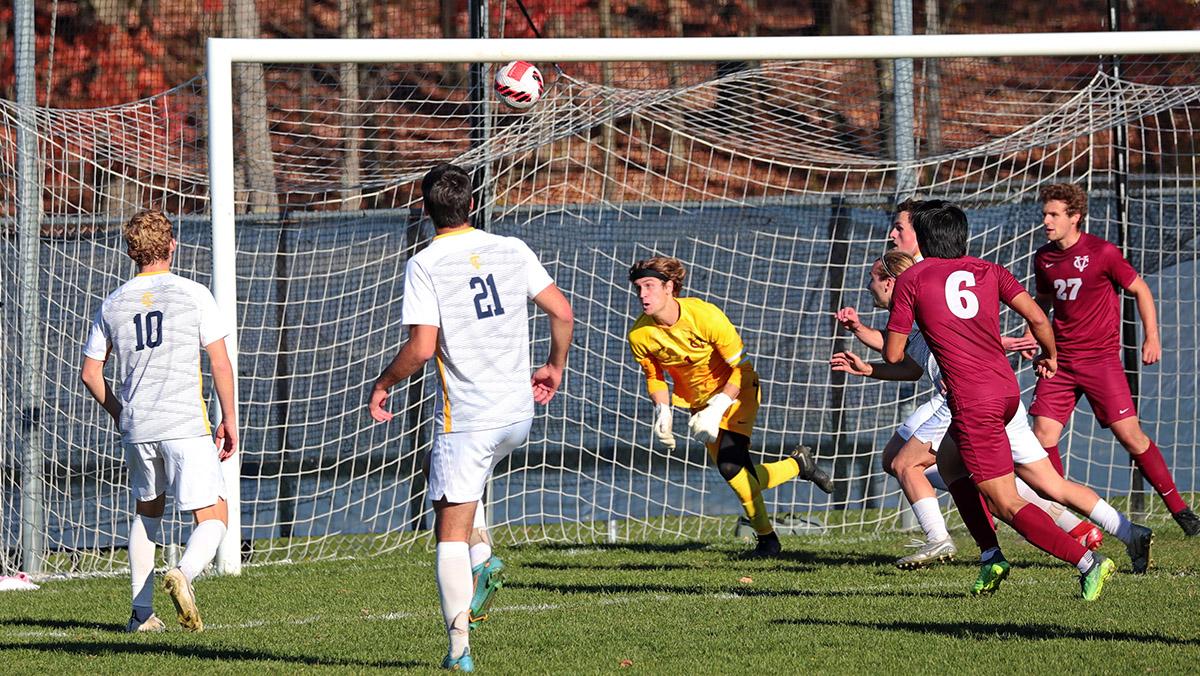 After going 8–6–6 in 2021 and making the Liberty League Championship game, expectations were high for the Ithaca College men’s soccer team for the 2022 season.

However, the team did not come close to matching its record from a season prior, going just 3–9–5, in large part because of a lackluster offense that produced only 11 goals in 17 games. The rough season was frustrating for many on the team, including junior goalkeeper Ian Whitfield.

“I’m not going to lie, it has been difficult,” Whitfield said. “Nobody likes losing, especially here at this college. And we just take it day by day. No matter what comes our way, we break down what has happened, we regroup as an organization and just try to come out better, stronger and fix whatever we think needs to be fixed.”

The Bombers’ 11 goals have come in just eight games, a .647 goals per game average, ranking the team last in the Liberty League for goals scored.

The team’s lack of scoring was also impacted from the roster turnover that happened at the end of the 2021–22 academic year. Last season, the South Hill squad had 16 seniors on the roster. This season, only three seniors returned as graduate students while the team added 11 first-year students and three transfers.

Senior forward Aidan Keenan said that despite the roster turnover forcing first-year students to step up, he thinks they have helped the program by getting on the field and getting used to playing collegiate soccer.

“We have a completely new team this year,” Keenan said. “So we have that many new players that have to come in and be ready, and I think they’ve done that. I think they all have adjusted well. Some freshmen are getting some playing time, and transfer students are getting playing time.”

For the Bombers, the offensive’s woes were difficult. Whitfield said that the team’s struggles were not easy considering how close it was to a conference championship last season. The team took the last few games of the season trying to limit the struggles at the beginning of the season, but could not truly get on a winning track to make a push for a playoff berth.

Junior midfielder Reefe Harrison said this season was a challenge for everyone on the team as this stretch of losing is not something the team is used to. Three wins is the lowest total for the program since 1978, while 11 goals is the lowest total for the team since it hit the net just eight times in 2010. The last time the program failed to record 20 goals in a season was 2015.

“I think more often than not, our troubles were our own doing rather than teams actually being better than us,” Harrison said via email. “We didn’t do the small things like following the runner every time, or playing a half second faster when we were tired.”

Whitfield said the team’s mentality, especially for the older students, was to keep pushing through no matter the outcomes of the games. So even when losing, he said the team still had the same goal in mind.

“I mean, this is a college athletics program,” Whitfield said. “We’re 18- to 22-year-olds. And overall, we should feel like we’re mature enough to be able to handle whatever comes our way or whatever is put on our plate. And yeah, it’s easier for kids like myself, and for the seniors and especially the fifth-year [students], who know how the process works and have gone through full seasons before to see how that process goes. But we haven’t made any steps to change our goal.”

A key goal for the team was to build off last season. Keenan said the team wanted to have success in the Liberty League and wanted to win in the conference.

“[The goal was] definitely to win a championship,” Keenan said. “That’s always been our goal. Winning the conference gets you to the NCAA tournament. We made it there my freshman year when we got an at-large bid. We came up just short last year at the Liberty League finals. So this year was definitely the goal to get a championship game.”

While the South Hill squad expected more success this season, Keenan said they did not adjust their goal as the games went on, even if the likelihood of winning the conference slimmed.

“It’s definitely a difficult time right now with how we started the season,” Whitfield said. “Obviously not what we were looking for. We’re a very successful athletic program at Ithaca [College]. And in the past few years we’ve had a very successful soccer program as well.”

In last year’s season that culminated in a Liberty League Championship appearance, the Bombers scored 22 goals en route to a third-straight winning season. Though the squad looked different after graduation, the goal was still the same.

A key part of the team wanting to get to that goal was the conference schedule. As the team entered October, it had seven conference opponents out of its final eight competitions. Keenan said the team wanted to take advantage of this conference play to get back into the tournament.

Fueling that confidence during the season was the Bombers defense. Despite the slow start in scoring goals, the defense had been solid at not letting teams run the score up on the Bombers, keeping games close.

This season, the Bombers only allowed their opponent to score multiple goals in a game seven times, while earning shutouts in five others. However, they also were shut-out eight times and only scored multiple times in a game once. Keenan said that if the offense could have scored more goals, he feels that the defense can hold up against tough competition.

“We’ve always had one of the better defenses in the country, so we know we can trust them to stop any team that we play,” Keenan said. “That gives us more confidence to go forward on offense, knowing that our defense is going to shut it down back there. Offensively, we just need to get one or two goals, and we’ll get to where we need to be.”

As the team moved forward from its struggles during the season, Whitfield said the team’s close chemistry will help them in the future by not getting down on each other.

“We have a tightknit group of guys,” Whitfield said. “I love every guy on this team with all my heart, and I would do anything for these guys no matter what, whether it’s on the soccer field or not. … We’re family and from the beginning, no matter if you’re a [first-year student] or a fifth-year [student], we all treat each other the exact same. And we’re always there for each other no matter what.”

Looking ahead to next year, Harrison said that the team is looking to involve the younger players more and develop their talent during the spring.

“Mentally it was definitely tough, because it was a situation that none of us had ever been in before where we couldn’t drop points, and we were playing our toughest opponents,” Harrison said via email. “All things considered though, we didn’t give up, especially the seniors and fifth-years. They knew it was their last shot and definitely played like it was.”