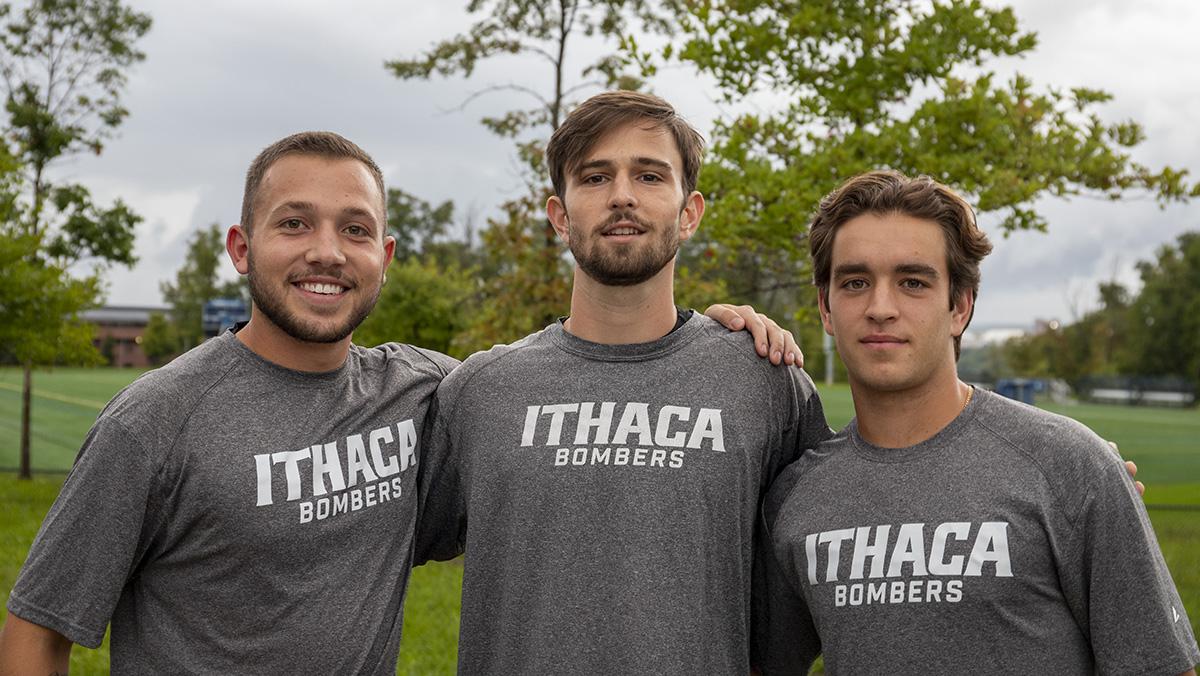 As the start of the new 2022 season opens up for the Ithaca College men’s soccer team, some new faces that have arrived on South Hill from other collegiate soccer programs look to showcase their skills in their new colors.

The team welcomes in three new transfer students that were once recruited and played for NCAA Division I and II programs: junior defender Emmett Delesie, sophomore defender Jack Longo and junior midfielder Ian Oltman. All three players have taken their collegiate soccer pursuits to Ithaca in an effort to seek better opportunities in making impacts on the field. It is not the first time the Bombers have welcomed in DI transfers either, with the men’s and women’s basketball teams having transfer athletes from big institutions in recent years, among others.

Delesie hails from Marshall University in Huntington, West Virginia, where his team won the NCAA Division I National Championship in 2020. Delesie has been attending classes at Ithaca College since Spring 2021, pursuing his undergraduate degree in economics. Despite his academic transfer process, which he said was difficult considering he transferred during winter 2022, Delesie said the college made the process a lot more feasible for him. He said the advisors and faculty were welcoming and made an effort to meet him, which was helpful. In terms of making his way onto the soccer team, he said he was pleased by how welcoming head coach Garret Eldridge and assistant coach Austin Mansell were to him.

Along with his admiration for the prestigious economics program the college has to offer, it was also the aesthetics of the campus during the cold Ithaca winter Delesie loved so much that sealed the deal on his decision to make Ithaca College his new home.

“I came and visited in December [2021] when it was already cold, but there wasn’t a lot of snow on the ground and it was beautiful,” Delesie said.

When it came time to connect with his new teammates, Delesie said he wanted to make that one of the most important things on his priority list.

“I was really close with my team at Marshall, so that was a concern,” Delesie said. “This semester has been amazing. Not only do I know the freshmen very well, but I know the seniors very well and the juniors. There have been multiple guys that I have gotten along with very well, like [sophomore defender] Aidan Trierweiler, [junior forward] Christian Leach, [junior goalkeeper] Ian Whitfield, [senior defender] Jackson Fox. I can name a multitude of people. They’ve all been amazing. I’ve got a great group of friends that I can hangout with outside of soccer now.”

Romildo Sanches has coached Delesie in his home state of Florida since he was seven years old, where he established a training program called Players Club International Tour, where young American athletes exchange cultures by training, playing and interacting with future Brazilian professional athletes. Since 2009, Sanches has worked with Delesie as both a coach and a private trainer, which Delesie said they still do today. In 2013, Sanches brought a group of kids down to his home country of Brazil to play against teams based there for two weeks, including Delesie. During their stay, not only did Delesie get to experience playing soccer in South America, but Sanches also brought the group to watch games that were played as part of the 2013 FIFA Confederations Cup.

Sanches said he could not help but commend Delesie for his great attitude of competitiveness that he has brought on the field every time he worked under his instruction.

“Since he was a little kid, he was very determined,” Sanches said. “He always allowed action to speak louder than words. He was the first one there and the last one to leave. If for some reason he didn’t quite get an exercise, we would work extra to make sure he kept up with the guys. And that may be the reason why he is playing in college.”

Longo transferred to the South Hill from Bryant University in Smithfield, Rhode Island, where he appeared in five games during his first year for the Division I program. He used his time training with the Bombers during the preseason to study how his new teammates played the game and how it was different from how the team played last year.

“Last year [Ithaca College’s men’s soccer team] didn’t keep the ball on the ground as much,” Longo said. “This year we play on the ground, we’re a hard-nosed team, we play the balls through their team and pass them around. … A mix of that is deadly for a team.”

With the Bombers’ improved style of play, Longo feels he will have an easier time implementing his game to his team’s formation.

“I don’t like to just kick it direct,” Longo said. “I like to pass the ball around and get into the attack. Hopefully open up some scoring opportunities for the team. Then on the other side play defense, too. They’ve had a very strong defense in past years so hopefully I can contribute to that this season.”

Tom Mulligan was Jack Longo’s high school soccer coach at Christian Brothers Academy in Lincroft, New Jersey, where the program won two Non-Public A New Jersey State Championships, two New Jersey State Sectional Championships, and a championship in the Shore Conference while Longo was on the team. As far as personal accolades, Mulligan said Longo received first-team All-Conference and was named captain his senior year, all under Mulligan’s instruction.

“You always trusted Jack Longo in the back,” Mulligan said. “I always knew I had an anchor with Jack Longo on my back line. Someone that can be trusted, that understood the game and was fully committed to the team and the process of playing the style that we wanted to play. In the halls, he’s a very polite, respectful, typical Christian Brothers student. Just a real honest, sincere young man.”

“This offseason was the hardest I’ve worked in two or three years fitness-wise, work ethic-wise and training-wise,” Oltman said. “I just wanted to be ready. I know it’s a [Division III] school but all the research I did and all of the people that I talked to said that this school is a really good school for soccer. It’s definitely a rebirth for me, that’s a good way to put it. It’s definitely my last shot, but I got two years and I’m gonna show what I got.”

This year marks the third year in charge of the college’s men’s soccer program for Eldridge. He took the time to commend all three of the players and the skills that they bring to South Hill, saying that all three of them looked impactful in the preseason scrimmages that were played against the University of Rochester and Alfred State University.

“We’re excited to see where they go in the season,” Eldridge said. “We were very intrigued with [Longo’s] attacking abilities out of the right-back position. He’s a guy who’s not only a defender but a guy that can join in when we have the ball. Ian Oltman is an outside midfielder or an attacking option for us that has really good feet. Emmett Delesie is a player with a lot of skill in the final third.”

With great on-field abilities must also come off-field abilities, and Eldridge said he was very pleased with who the three players were as individuals off the field.

“I think the most important thing is that they’re really good people and have certainly fit in well with the rest of our guys in terms of just characteristics that we look for in all of our guys,” Eldridge said.

Since the season has started, Delesie, Oltman and Longo have each been registering minutes on the field and will look to continue their work when the Bombers host SUNY Brockport at 4 p.m. Sept. 16.