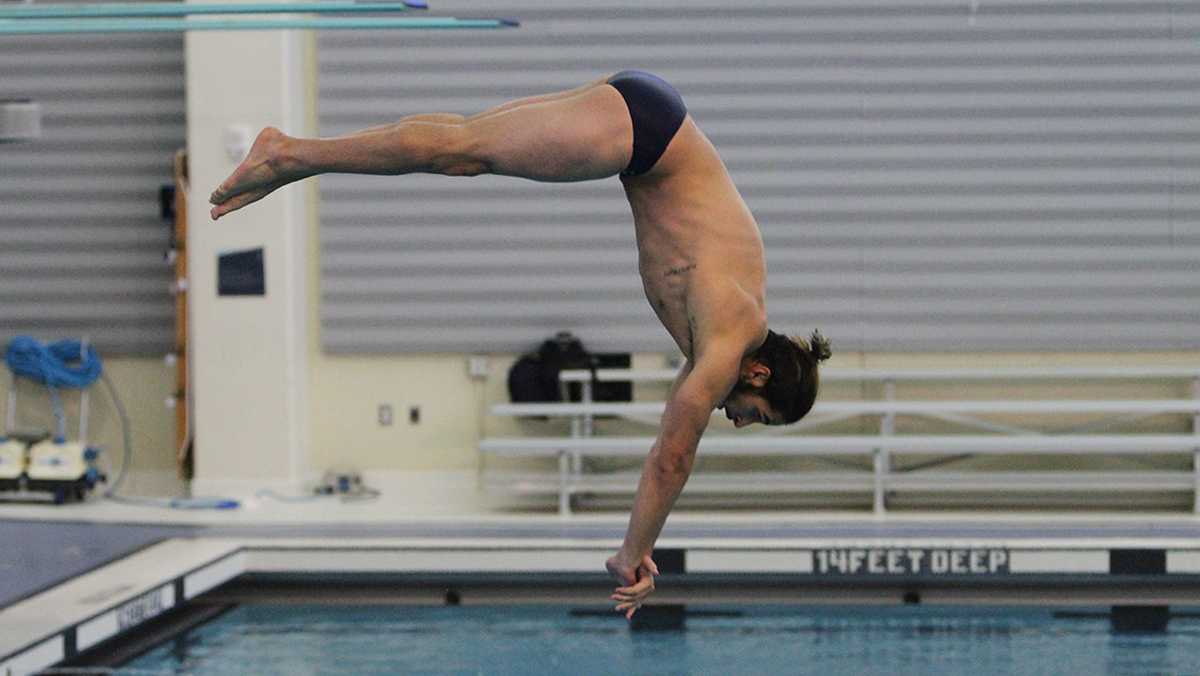 Alexis Liberatore/The Ithacan
Senior Jon Yoskin competes in the 3-meter dive during the swimming and diving meet against SUNY Cortland on Nov. 7 at the Athletics and Events Center. Yoskin came in fourth in the event.
By Adam Brobst — Staff Writer
Published: November 11, 2015

The men’s swimming and diving squad is coming off a successful season in which it went undefeated with a 15–0 overall record. The impressive feat was after two previous seasons where the Blue and Gold went 13–1 during the 2013–14 season and 15–1 the year before that. At 2–1 on the season, the Bombers are already off to a good start.

Senior Vincent Dodero was ninth on the team in the 50-yard freestyle with a time of 22.69 and was seventh in the 100-yard breaststroke with a time of 1:05.05. He said the team is finding a way to deal with the loss of the valuable swimmers and divers it lost to graduation.

“It has been a tough loss for us in terms of numbers, but I am confident that the talent on our team will ensure a successful season,” Dodero said. “First and foremost, our goal for the season is to win always and in all ways.”

In his 35th year at the helm of the team, which includes five undefeated seasons, head coach Kevin Markwardt said he has high expectations for the squad this year.

However, Markwardt also said he is not so much concerned about the wins and losses for the team this year, but how it improves throughout the season.

In addition to the squad’s victories over SUNY Brockport and SUNY Fredonia at the beginning of the season, the Bombers also suffered their first loss since the 2013 season Oct. 31 to Rensselaer Polytechnic Institute.

However, Dodero said the Bombers’ early success isn’t necessarily an indication of how the season will go.

“I do not think that competitions at the beginning of the season for any sport are indicative of how the season will play out,” Dodero said. “Swimming is a sport of progression, and we have some great talent that we are all anxious to see that come into fruition as the season goes on.”

Markwardt said the loss was a learning experience for the whole team and said the team will hopefully use the loss as motivation to get better throughout the season.

“I hope it was a little eye-opening for them,” Markwardt said. “I hope it’s a learning experience, kind of understanding of where they are and what it’s going to take to get where we’ve been in the past. I will say the freshmen did really well. I was really happy.”

Dodero said one aspect that will propel the squad to success this season will be the fact that the team has plenty of chemistry and potential.

“Going into the season, I think that our unity and commitment to excellence will drive us forward,” he said. “If someone were to go to a swim meet and watch the way other teams interact with each other, it is clear Ithaca College swimming and diving has something more.”

As a senior leader, Dodero said he has enjoyed teaching the 10  freshmen how the team functions and what is expected of them.

Freshman diver Scott Hillen said the team’s early season success is something the newcomers are looking forward to.

Hillen said he has high hopes for the team this year because he believes the team has been training hard and has a depth of talent.

Markwardt said he knows that there is still much hope and potential for the team.

“I’m always excited about the kids, especially with the freshmen that come in because you just don’t know. So what I saw last weekend at RPI, I got really excited to see what the potential of some of those kids are,” Markwardt said.

Diana Huberty and Jaysha Patel contributed reporting to this article.