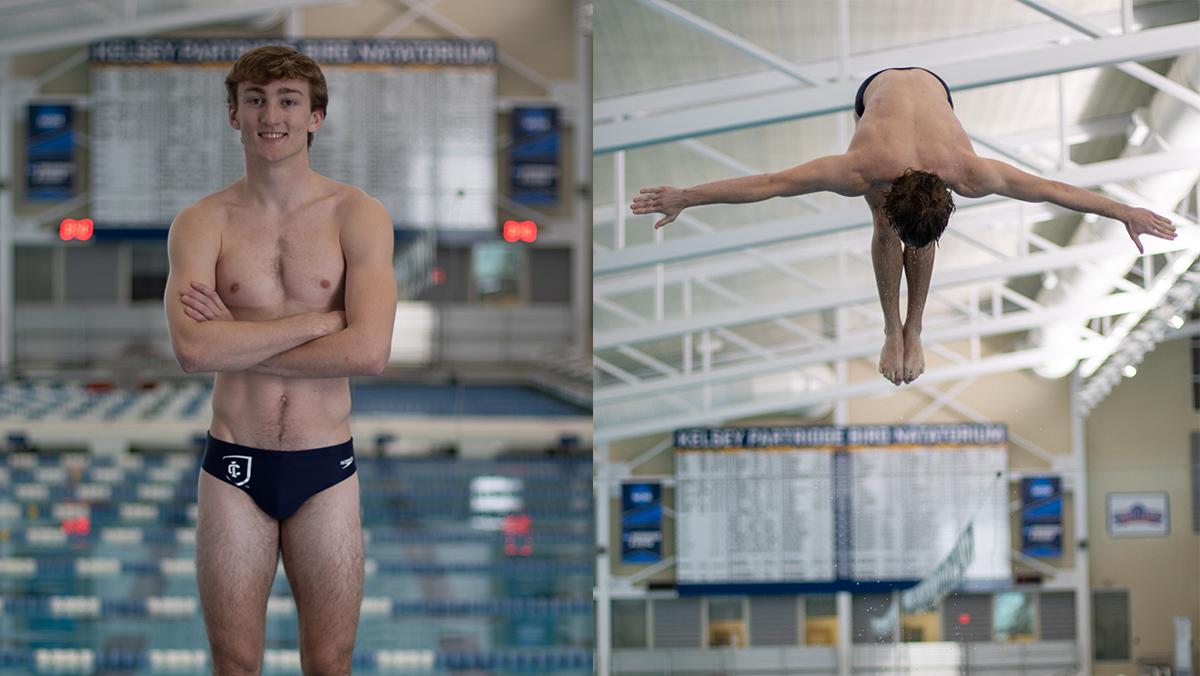 Eleanor Kay/The Ithacan
Junior Ethan Godfrey is returning this season as one of the team's top divers. He won the Liberty League title in the 3-meter diving event in his freshman year.
By Connor Glunt — Sports Editor
Published: November 10, 2021

The Ithaca College men’s swimming and diving team returned to the waters of Kelsey Partridge Bird Natatorium on Oct. 16 with swimmers cruising down lanes and divers slicing through the air to kick off its first in-person regular season competition since February 2020.

The last time the Bombers were in the water for a winter season meet was Feb. 29, 2020 at the Liberty League Championships, where the team placed second at the meet. This year, the Bombers kicked off the winter sports season for the college with meets against Buffalo State, The College at Brockport, Rensselaer Polytechnic Institute (RPI) and SUNY Cortland. The team went 4–0, winning the meets by scores of 238–42, 238–54, 152–142 and 217–82 respectively.

Head coach Kevin Markwardt said prior to the meet against RPI on Oct. 30, the Engineers — the reigning Liberty League champions — were one of the teams the Bombers had their sights set on heading into the season. With the Bombers’ early season victory against the top Liberty League team, Markwardt said it should boost the team’s confidence right out of the gate.

“RPI, we actually haven’t beaten them for several years,” Markwardt said. “They’ve been the Liberty League conference champions for several years. … They’re big in our conference. They’re always a big meet. We’ve gone back and forth with them over the years, and to be honest with you, the last couple years, it’s been them.”

Markwardt also said Rochester Institute of Technology (RIT) is another top conference team in the Liberty League, and the Bombers are scheduled to compete against RIT on Nov. 20. The Bombers’ next competition against RPI will come in the Bombers Invitational on Dec. 3.

The team is bringing back a strong group of returners on both the swimming and diving sides of the sport. Assistant coach Mike Blakely-Armitage mentioned junior diver Ethan Godfrey and graduate student freestyle swimmer, Stanley Zaneski, as two of the top athletes on the team. Markwardt also added that the three captains, senior swimmers Tim Hector, Michael Sheehan and Matt Crysler should set the tone for the team in the lanes.

“This season, I want to try to get some of the last big dives I really need for senior year so that by the time senior year season comes, I’m just working on cleaning up those dives, so this year I just want to get those big dives off,” Godfrey said.

In his first season of collegiate diving in 2019–20, Godfrey said his goal was to qualify for the NCAA Championship. However, the way the schedule is structured, swimmers and divers can only qualify with top performances at the NCAA Regional Tournaments, regardless of how the rest of the season went before those two meets. Now, with more difficult dives and bigger goals, Godfrey is confident he can meet his personal expectations this season.

“Freshman year, I had really set my eyes on making it to nationals,” Godfrey said. “ I think this year, I’m really looking to show up [at regionals] and prove I could get [to nationals].”

Of course, the team won’t be reliant on its returning veterans. Markwardt said this year’s incoming class of freshmen will play a key role in how the program competes as a whole.

“It’s one of the stronger classes we brought in several years,” Markwardt said. “Honestly, the sophomore and the freshman class, they’re going to determine a lot of our success. There’s a lot of talent there. If we manage it, that’s where our success is going to live. There’s just a core of people in those two groups that are gonna score a lot of points for us.”

Regardless of talent, the transition from high school to collegiate swimming and diving is not always an easy one. However, Crysler said the upperclassmen of the team have done a good job showing the newcomers the ropes of making the jump, and it has paid off for the entire team.

“They’re really fast, and we have our top swimmers come in and see [the freshmen’s] times and seeing how they work in practice just pushes everyone else,” Crysler said. “Just having fast kids pushes fast kids, and having a good culture that they know now brings better swimmers and more overall hard work in practice.”

“Honestly, as a leader on this team, … I want to push the other kids as well in practice,” Crysler said. “I think pushing them in practice gets me faster and gets the other kids to work harder in practice well, so those underclassmen that came in really fast can still learn the culture and work ethic that we have.”

Both Markwardt and Blakely-Armitage said they do not like to place expectations on the team because everything is performance based. They cannot control how other teams compete, so their focus is on their own team. However, Blakely-Armitage said there is an overall desire for the program to continue its upward trend and take another step forward this season.

“I think that there is that goal beyond the Liberty League to be a presence at the national level,” Blakely-Armitage said. “But, I think that it has been a goal for the seniors that are currently on the team and our juniors, and so I think they’d like to reach that pinnacle. It’s going to be a really hard challenge, but I think we definitely have the squad to do that.”

The Bombers’ next meet is against Le Moyne College at 5 p.m. Nov. 12 at Kelsey Partridge Bird Natatorium.