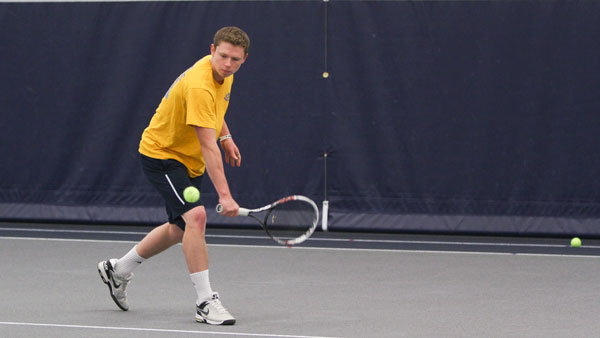 As the final week of the men’s tennis team’s regular season approaches, six teams are vying for four spots in the Empire 8 championship, to be played May 3–4 at Nazareth College in Rochester, N.Y. A week after clinching a spot in the championship, the South Hill squad is seeking its first conference title since 2009.

As six of nine teams have a record below .500 in a weak Empire 8 conference this year, the Bombers are aiming to capitalize on this opportunity. After winning five out of seven conference titles from 2003–09, the Blue and Gold have made the conference championship every season since 2010 but have lost the title match at the hands of Stevens Institute of Technology. Approaching the final weekend of this year’s regular season, the Ducks and the Bombers are yet again the top two teams in the tournament standings.

In their only meeting of the season, Stevens ousted the Blue and Gold, taking the match by a score of 8–1 on March 29 at the Reis Tennis Center at Cornell University. The Ducks also have a perfect record in conference play, with an 11–9 record overall on the season. This has been a familiar pattern since Stevens has taken reign of the conference the past four years.

Though Stevens has proven it is the best in the conference with a perfect record in the Empire 8, the Bombers want to snap the streak.

Senior player Kyle VanDelden said matchups are an integral part of the Blue and Gold’s success against the Ducks.

“We look at the schedule and see how they do,” he said. “We see who is playing where and try to create the best matchup possible.”

The Bombers recruited five freshmen for the team this year, two whom are now a key part of the regular starting lineup. Freshman Wes Davis leads the team in singles with 14 victories, while sophomore Joey Hanf has worked his way into a starting role late in the season.

Junior player Justin Levine said Davis and Hanf have been a key part to the success of the Bombers this season.

“They have come a long way and challenged the upperclassmen more, even if they are not playing every once in a while,” Levine said. “They are competing with us and pushing for our spots, which makes us get better.”

The team was dealt a tough non-conference schedule in the beginning of the season, and got off to a rough 2–4 start. It faced tough matchups in its first match of the season, losing 8–1 to the University of Rochester on Feb. 22 and a heartbreaker 5–4 against Hobart College on March 25.

Despite the last three losses in first doubles with sophomore Zach Passman, Levine has been a consistent threat in singles, winning his last three of four matches. Levine said the team is hitting its stride and beginning to play with more consistency.

“We have had some good days and some tough days,” Levine said. “It has been a little too up and down for our liking. We are a very deep team, but we are starting to play a lot better.”

The Blue and Gold are currently playing their best tennis of the year, having won five of their last six matches, all coming in Empire 8 competition, since their loss to Stevens.

Levine said the Bombers need to finish the regular season with positive momentum leading into the conference championship.

“The last two weeks, we really crank it up,” Levine said. “We try to get our stamina up so as we move outside — it’s going to be hot — so we just try to get the repetitions up and watching how fast the courts go.”

Austin said the team works on several singles and doubles techniques at practice to maintain consistency for the final matches of the season.

“[We] are just working on footwork and hitting a lot of balls to make sure we hit our timing and keep our focus so that over the weekend, we are ready to compete hard,” Austin said. “Playing directional games, or crosscourt games, works on your most consistent shot and also just [helps get] us in a competitive mindset.”

Levine said the Bombers need to play their best tennis if they expect to defeat Stevens.

“It’s tough when a team beats you four straight times, so you have to go into with a lot of confidence,” Levine said. “If we play our A-game, expecting to win, it’ll be close.”