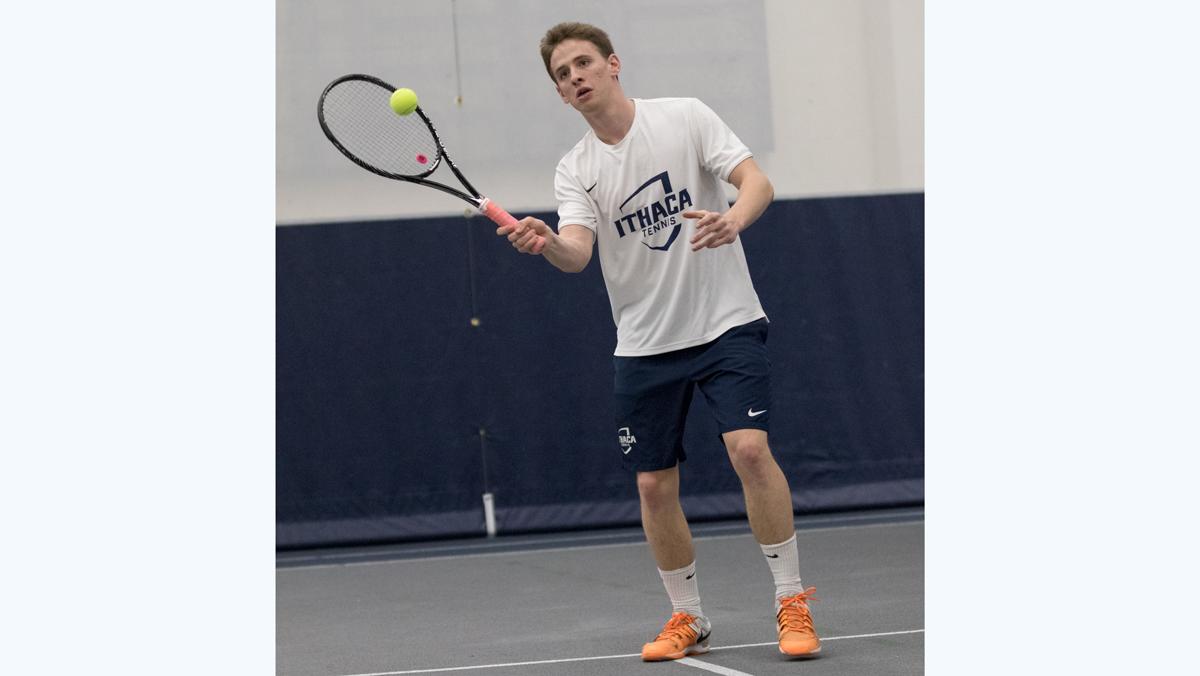 As the Ithaca College men’s tennis team enters its spring season, there will be a familiar face for some members of the Blue and Gold: Chris Hayes ’16 is back, but as the assistant coach instead of a teammate.

“It’s good to be back,” Hayes said. “It is a little different being a coach to the people I played with, but it’s just a professional relationship, and we all have the same goals.”

Hayes’ knowledge of the team will be helpful this season as the Bombers transition into the Liberty League Conference. During Hayes’ time at the college, the South Hill squad played non-conference matches against Hobart College, Rensselaer Polytechnic Institute, Rochester Institute of Technology and St. Lawrence University, which will now be conference matches.

Senior captain Lorenzo Viguie-Ramos said that in the Empire 8 Conference, the Blue and Gold’s only challenging match came from Stevens Institute of Technology.

The Bombers’ toughest competition will come from Hobart, RPI and Skidmore College, Viguie-Ramos said. All three teams finished in the top five of the Liberty League standings each season since the 2011–12 season and are also ranked in the top 40 in the nation.

To prepare for the tougher competition this season, each member of the team has one to two individual sessions with Hayes or head coach Bill Austin per week. Junior Sam McGrath said the individuals have helped him improve.

“The individuals help because you know what went wrong in practice and then you can put it into action during that lesson,” McGrath said. “It’s great because it’s one-on-one with the coaches instead of just running drills during practice.”

Austin is also changing practice this season to make sure that the Blue and Gold is practicing with the same intensity with which they will be playing matches. During practice, the South Hill squad is focusing more on doing drills that will directly impact how they play during a match instead of just playing against one another.

“The preparation on our part is creating more of a working knowledge of everybody and how people play on other teams and what their strengths and weaknesses are,” Austin said.

Viguie-Ramos said the extra drills will help him prepare for the tougher competition in the Liberty League.

“We have been doing a lot of cross-court stuff, a lot of sets, a lot of quick hands to get the guys aware of what they are going to be seeing because these guys in the Liberty League are no joke,” Viguie-Ramos said.

“We are really relying on youth to come through,” Hayes said. “The underclassmen are really buying into what we want to do here, and we are going to do good things.”

Having depth on the roster will help the Bombers complete their goal of making the Liberty League playoffs at the end of the season. To qualify, the Blue and Gold will have to be ranked in the top six of the league.

“I’m 100 percent sure we will be in the top six,” Viguie-Ramos said. “I would like to be in the top three. That involves beating out Hobart and RPI. We beat RPI last year, but every team is getting better, so we have to put in that extra work.”