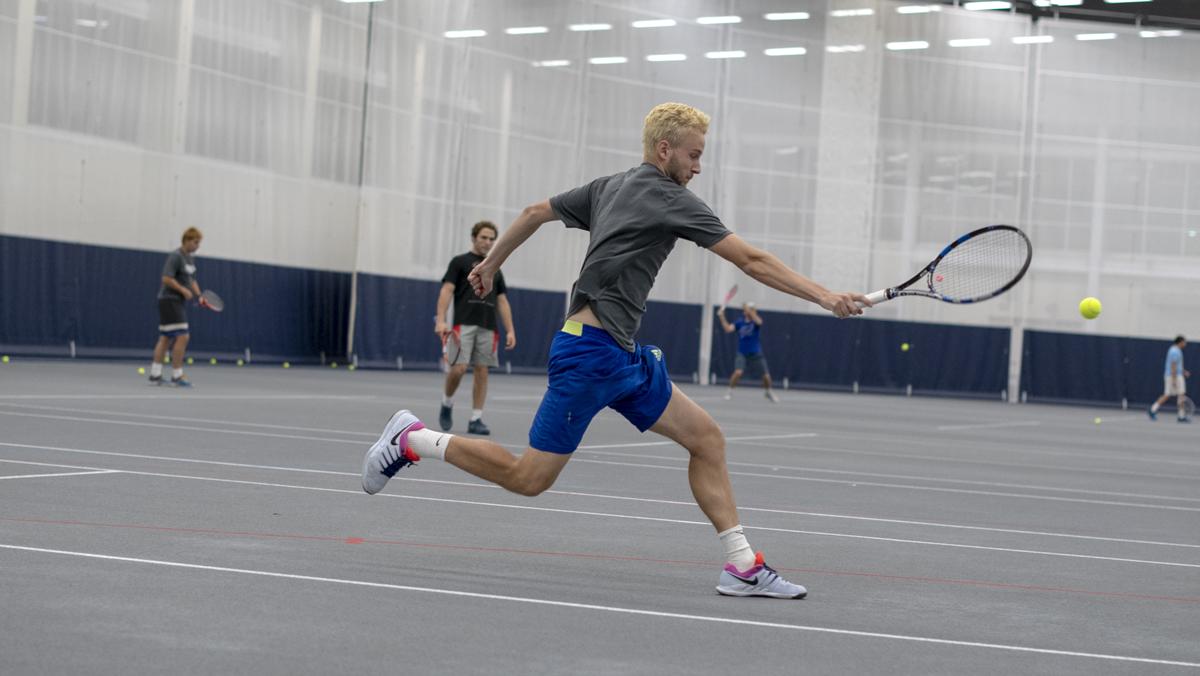 KRISTEN HARRISON/THE ITHACAN
Junior captain Colten Lavery returns the ball during practice March 21. Lavery has started in both singles and doubles in every game this season.
By Jack Murray — Sports Editor
Published: March 28, 2019

The Ithaca College men’s tennis team has been able to build up a large group of upperclassmen over the past few years as a result of recruiting and transfers. Though this may positively impact its current season, the team will soon have to rebuild almost all of its roster.

Currently, 12 of the 14 athletes on the men’s tennis team are upperclassmen. This includes five seniors and seven juniors. The entire starting lineup, which consists of six singles players and three sets of doubles pairs, is currently filled by upperclassmen, many of whom have held these positions since they started on the team. After the 2019–20 season, the Bombers will be forced to have a team with one junior and one senior and will have to rely heavily on recruiting over the next few classes to be able to even the field of experience.

Senior captain Sam McGrath, who serves as one of the captains on the team, said that having a heavy upperclassman presence helps make his job easier because he is working with teammates who have experienced the demands of a collegiate tennis season and don’t need to be motivated to work hard.

“It does wonders for leadership,” McGrath said. “We have a lot of experience on the team and it does very well with being able to be prepared for matches. Our guys know what it takes to be able to compete against guys who are experienced. The fact that we have guys who know what this team is about is a positive thing.”

Head coach Bill Austin said that having an older team really benefits the team’s chemistry because members have had more time to develop close relationships among one another, a dynamic that differs from younger teams that have players still just getting to know their fellow athletes.

“Every year is a little bit different,” Austin said. “The personalities of these guys have emerged since they have taken a leadership role and taken ownership of the team and what it means to bond and play an individual sport as a team. It’s great to see a class like that grow and grow together and grow as friends. It’s the bond that makes them better and stronger and it’s fun to watch that evolve because it doesn’t happen as they come in as first-year players.”

“We are just going to have to continue to recruit harder,” Austin said. “We have had a lot of visits for recruits to start next year, and we should be getting a similar wave over the next two recruiting classes.”

Junior captain Colten Lavery has been a consistent starter since his freshman year. He said his class came to the Blue and Gold right before a major transition, as they were entering their last year in the Empire 8 Conference. Lavery said the talent from his age group added pressure for him because he knew he needed to step in and play well right away.

“For the last few years prior to leaving, we had lost in the conference final to [Stevens Institute of Technology],” Lavery said. “We had a really good recruiting class, and we knew that this was our last opportunity to win the Empire 8. As freshmen, this put a little bit of pressure on us because the older guys were saying, ‘You guys are here to help us now. We’re going to do this, and we’re going to win.”

Even though the Bombers were unable to finish out their Empire 8 tenure with a league championship because they fell to the Ducks 5–0 in the championship, Lavery said the motivation only improved as the team was ready to take on the Liberty League Conference. Austin said the upperclassmen have improved since they joined the Liberty League, allowing them to be a contender in the conference.

“They’ve embraced that challenge to raise their game and raise the level of their play in order to compete in a league with incredible depth,” Austin said. “The Empire 8 had some good teams, but the depth of the Liberty League is where it changes for us. Every match is well contested, and every match is tough.”

Though having a large group of upperclassmen works well for the team off the court, it does cause issues with playing time. While there are technically 12 spots between singles and doubles, McGrath, Lavery and junior Minos Stavrakas have participated in every singles and doubles matches so far this season, and juniors Liam Spiegel and Sam Fried have played in both singles and doubles in five of the seven matches. This means that seven of the upperclassmen are fighting for one or two spots at the end of the lineup in every match. This can be devastating to those who have worked to earn a spot in the starting lineup. Lavery said he has seen his teammates struggle with not getting the playing time they would like to have as upperclassmen.

“It’s tough for some of the guys,” Lavery said. “It’s easy to tell a freshman who may be the seventh or the eighth guy that they are not starting right now, but their time will come. If you’re still the seventh or eighth guy for four seasons, it’s tough because it is your last opportunity. I haven’t been pushed out like some of my teammates have, but for them, I know it’s frustrating.”

McGrath said that having several quality upperclassmen makes the competition in practice better because guys are trying to earn their spots.

“Toward the back of our lineup, we have a couple of spots that are not set in stone,” McGrath said. “I think it’s good to have a lot of experienced players at our disposal because if we need to throw someone in at the last minute, instead of forcing a freshman who is at the back of the lineup and may be nervous, we have a player who has been practicing and witnessing everything the players in the lineup have been seeing.”

Lavery said the atmosphere surrounding collegiate tennis differs from high school tennis because it has more of a team feel, while high school teams focus more on the individual and how they represent the school. This transition can be difficult for freshmen, and McGrath said this gives the Blue and Gold an advantage because they are usually more team-focused than their opponents.

“There’s just a thing with being able to use your experience to beat people,” McGrath said. “The younger players are going to be thrown into obnoxious situations where people on the sidelines and the court are screaming, and young players might not know how to handle that like an upperclassman would.”

Lavery said the team culture has developed between the upperclassmen because they have been together for such a long time. He said this allows them to improve together on and off the court.

“From a camaraderie standpoint, it’s pretty good because it’s been the same core group that have been my friends and teammates since my freshman year,” Lavery said. “I’ve known all the guys for such a long time, and we have been able to grow and build together.”

Freshman Artem Khaybullin is one of two underclassmen on the team. He said that having upperclassmen as teammates has eased his transition into college.

“The older teammates welcomed me right away and made an effort to get me comfortable with the whole team, so it was really easy to adjust,” Khaybullin said. “They were friendly and understood what I was going through, being a freshman, and made sure to prepare me well for collegiate tennis. They pushed me towards being more responsible by constantly letting me know what to do.”

Though having so many upperclassmen means that Khaybullin will eventually have to lead a team that is rebuilding, he is currently focusing on developing the discipline necessary to perform well at the collegiate level through watching his older teammates. He said that when he rises up to be an upperclassman, he will try to keep the overall team culture close to the one he has been introduced to.

“Good things come and go, so hopefully new first–year students with amazing skills will show up to keep up the performance standards of our team,” Khaybullin said. “I think we all need to keep pushing each other and bond just like the team is now. My goal is to keep the future lineup as friendly and close as possible to follow the path of success.”