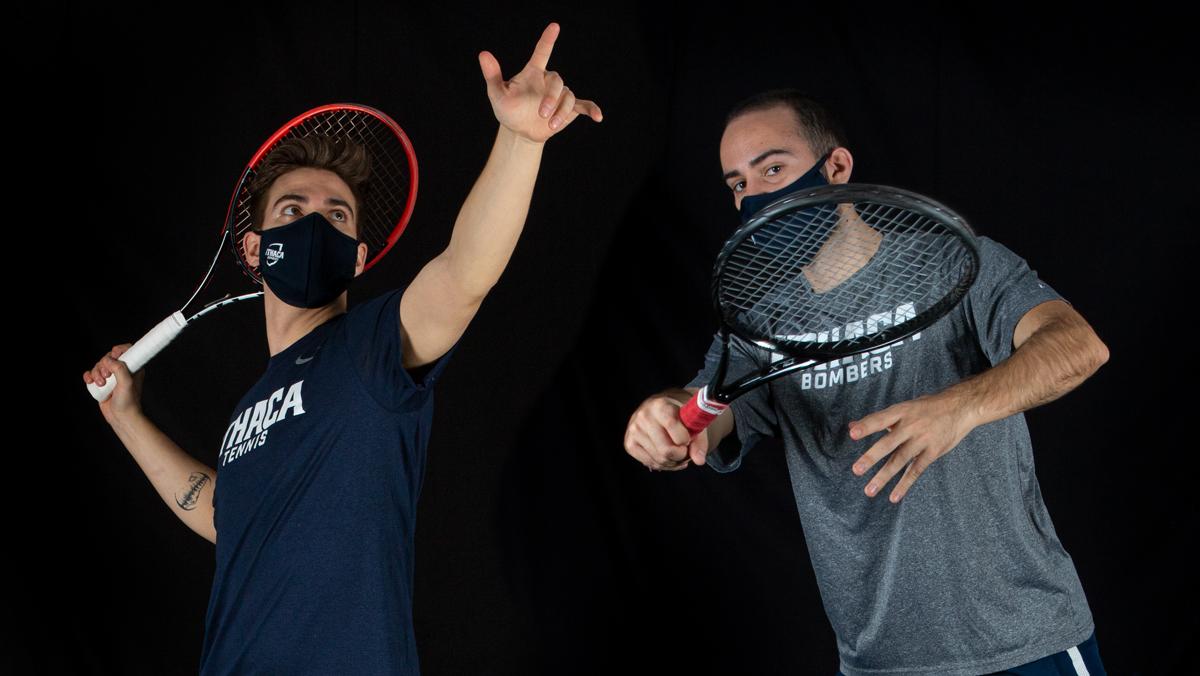 With some quality returners and solid recruits, the Ithaca College men’s tennis team is hoping to make some noise in the Liberty League this upcoming season.

The team was 1–5 in the pandemic-shortened 2019–20 season and 6–13 with a league semifinal appearance in 2018–19. These records can be attributed to some lingering growing pains from joining the Liberty League for 2017–18, but also from losing several key players to injury. Head coach Chris Hayes, who is in his first year as head coach of the program after former head coach Bill Austin retired in June 2020, believes that the team should show improvement if everybody continues to stay healthy.

“Last year was going to be a long year due to injuries,” Hayes said. “[First-year graduate student] Minos [Stavrakas] tore his ACL and we also didn’t have [senior] Max Prestwich, so it was going to be tough. However, [the team has] been competitive ever since they entered the Liberty League, and that should continue.”

The two join senior George Lomas, captain of the team, as the eldest members of the squad. Lomas has earned 11 singles wins and five doubles wins in his career and has continued to rise in the lineup. The upperclassmen on the team will serve as leaders on the court, but this does not mean that younger players are not expecting to see some significant playing time. Stavrakas shared praise for the freshman class.

“We’ve got five freshmen this year, and at least three or four are going to be starting,” Stavrakas said. “We’re having a lot of good new additions to replace some of the guys who graduated. [Freshman] Deon Kraft has been doing a great job, and we are set to play number one doubles together.”

Lomas said these younger players are changing the dynamic of the team due to their ability to hit hard serves. He said the team has been overall rally-focused these past few years, but having some high-velocity servers will allow them to pick up points the team may have lost in previous years.

“We’ve never been a big serving team,” Lomas said. “Now we have several freshmen who have really strong serves, so we have been focusing more on serving drills. This will allow us to get some free points from serves, which is something we haven’t really been able to do.”

Lomas also said the team has been focusing on playing more toward the net.

“We have a baseline strong team,” Lomas said. “We like to hang back towards the baseline and rely on our winners to get us points. Coach Hayes is trying to get us to start moving into the net and change the plane of the ball by using lower shots and then trying to win points at the net. This will make us better in both singles and doubles.”

“Hobart is definitely one to watch for,” Stavakas said. “Hopefully we can play well against them and that could help lead us towards the Liberty League finals.”

Hayes named Vassar as the top rival for the team and said the two matchups the team has against them will be interesting to watch.

“Vassar is an intense rivalry,” Hayes said. “We have clashed with them ever since we entered the conference. Each of our first two years we met them twice, once in the regular season and once in the Liberty League tournament. We have been able to beat them three times, and that is a huge accomplishment because Vassar is a really impressive school and really impressive program. That is our biggest in-conference rival.”

When looking toward the start of the season, Hayes said it will be interesting to see how the team responds to competing again. He said he believes the group is up to the challenge.

“There’s going to be a lot of nerves, that’s for sure,” Hayes said. “There will also be a sense of relief and a sense of normalcy. However I’m excited, and we have been preparing for this for over a year and everyone is looking forward to it.”