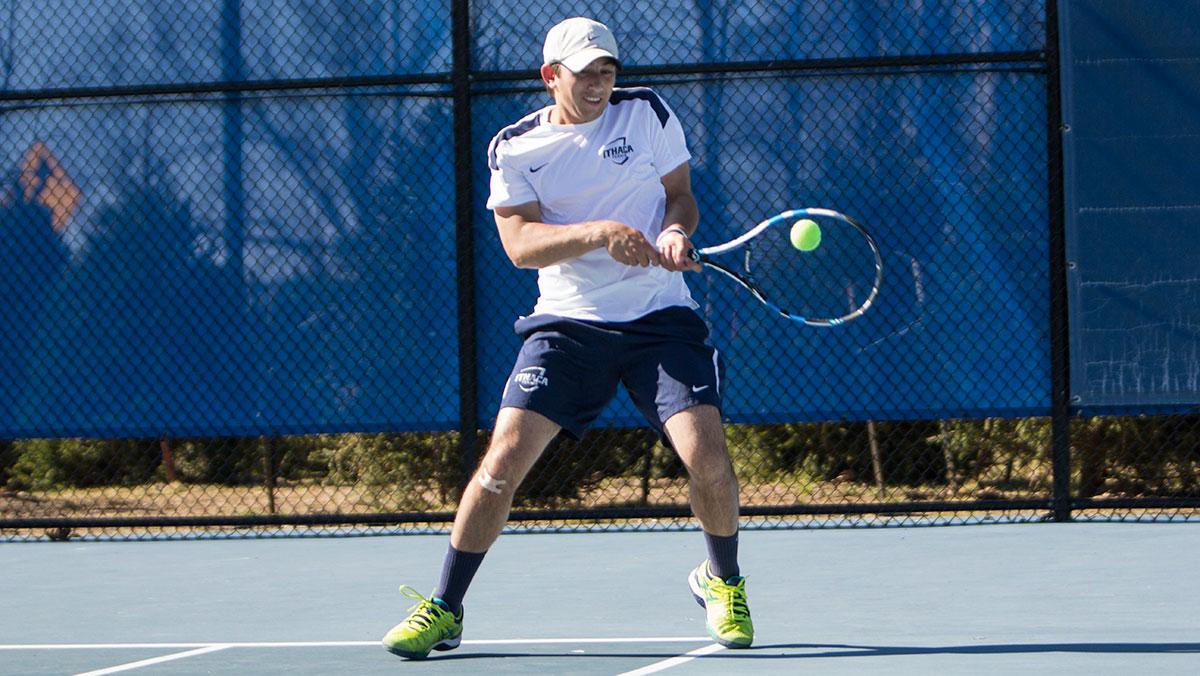 The day started with Ithaca College head coach Bill Austin congratulating the retiring Hartwick’s Andy Pontius on 17 years serving as the Hawks’ head coach. The day ended with the Bombers sweeping the Hawks 9–0 for their fifth Empire 8 win of the season.

With his 6–1 and 6–0 victory over freshman Krishna Patel in first singles, senior Chris Hayes earned his 100th victory as a Bomber. After the last point was struck, his teammates surrounded him and congratulated him on his milestone.

Hayes said he knew from the beginning of the season that it was possible, and he worked towards it.

“One of my goals coming into the season was trying to get 100 wins,” Hayes said. “It’s a great milestone because not a lot of players have done it here, but the big goal is still to win the Empire 8 Championships.”

The Bombers would record three more sweeps on the day despite not having one of their top players, freshman Michael Gardiner. Junior Nate Wolf and junior Brandon Buksbaum won 8–0 against sophomore Kelli Ryan and sophomore Sami Chaudhry in third doubles. Freshman Stefan Lazarevic beat Ryan 6–0, 6–0 in sixth singles, and Wolf took down senior Liam Brown 6–0, 6–0 in third singles.

In the second singles match, Davis cruised through the first set 6–2, but Hawks sophomore John Talbot put up a fight in the second set. Davis was able to close it out with a 6–4 second-set victory.

“I just had to play my game,” Davis said. “He was hitting some really flat forehands and I had to push him back behind the baseline. I wasn’t doing that at the end but I was able to pull through.”

The South Hill squad has four matches left before the squad heads to Stevens Institute of Technology for the Empire 8 Championships.

Assistant coach Jordan Smith said now is the time for the men to raise their level of play for the competition coming up.

“Now we’re going to be more competitive in practice,” Smith said. “We want the guys to push each other. We still have some great teams to face before we get to the Empire 8 championships, and we hope to be ready.”

The men are on the road for their next match against Hamilton College set to begin at 10 a.m. April 23 in Clinton, New York.