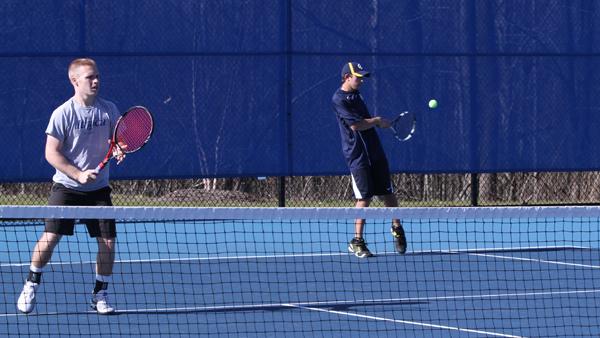 The men’s tennis team won Wednesday in convincing fashion against Utica 9-0. The Bombers got off to a good start by winning all three doubles matches and then sweeping singles without losing a set.

Moving up to fourth singles Wednesday, freshman Joey Hanf won his match (6-0, 6-1). Hanf said he noticed a lot of good things in how he played, especially in his movement.

“I was moving my feet really well and I had time to hit through the ball,” he said. “I served well and I returned well.”

Sophomore Alex Krugman was fifth singles in the match, his first appearance in conference play this season. Krugman won his match easily (6-1, 6-1). Krugman said the key to his success today was his consistency.

“I didn’t play out of control,” he said. “I kept the ball in the court and forced him to make mistakes. I played to the top of my game today.”

This win gives the Bombers their second win in the Empire 8 season. Coach Bill Austin said he hopes that after this win, his team will be able to go on a run as they approach a tough weekend with two Empire 8 matches.

“We have to get on a little bit of a roll,” he said. “We’re happy to get this one, we needed one badly and hopefully this will pick us up a little morale and get us ready for the weekend.”

Not all of the news today was good news for the Bombers as they learned that freshman Zack Lipson, who has seen time as a top three singles player all season, will be out for the remainder of the season with knee issues. Austin said that to fill in for a guy like Lipson, the whole team will have to step up.

“It’s a void there but injuries happen and that’s why we work all the way through, everybody has to step up,” he said. “There is not one individual that is going to carry this we all have to do it.”

The Bombers next match is scheduled to be outside on the Wheeler Tennis Courts on Saturday against Nazareth College at noon.