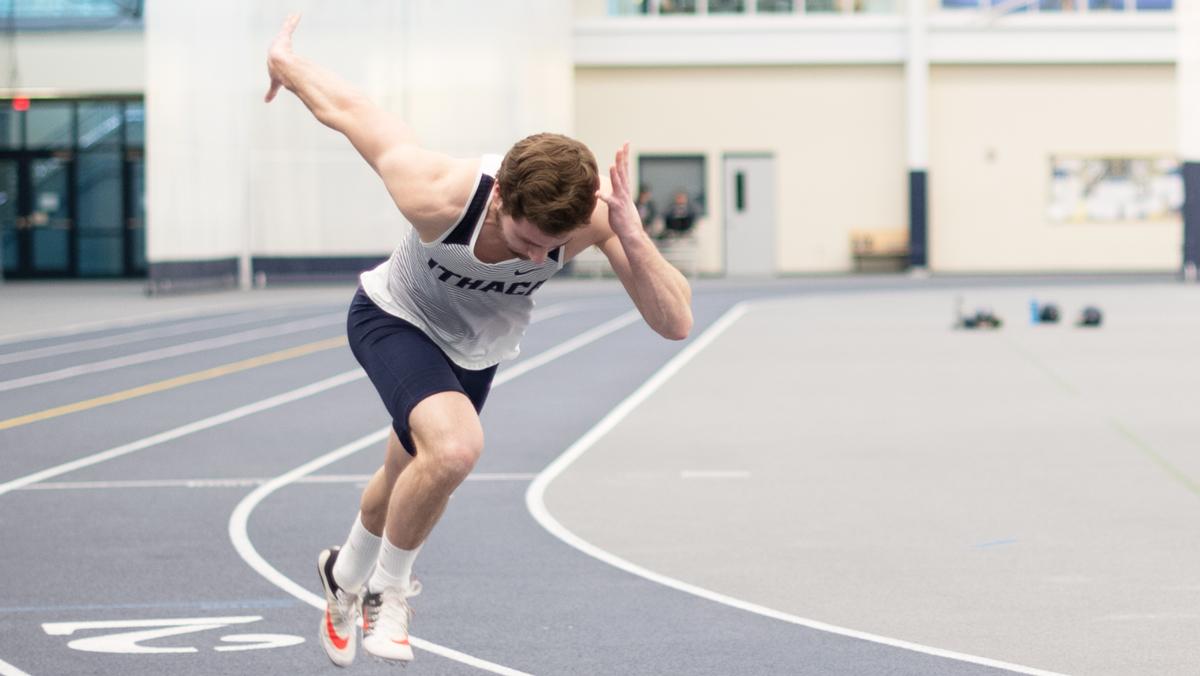 The Ithaca College men’s outdoor track and field team ended its last outdoor season on a high and plans to continue its momentum through the winter season.

The South Hill squad graduated eight seniors in 2018 but still has an experienced team coming back this season. It has also added 22 freshmen to the roster. Head coach Jim Nichols said he believes that the current group is strong and that the freshmen can do what is needed to get the job done.

The freshman class is already showing its strength in the indoor season, as two have already set school records. Freshman pole vaulter Dominic Mikula broke the college’s pole vault record with a vault of 4.72 meters Dec. 7 against SUNY Cortland, then he shattered his own record by clearing 4.80 meters at the Utica College Pioneer Open on Jan. 26. Fellow freshman Dan Monchek broke the 60-meter hurdles record with a time of 8.51 seconds Dec. 7 against Cortland.

The returning athletes have potential as well. Junior Dan Harden-Marshall has also had a record-breaking indoor season that bodes well for the spring. Harden-Marshall set the 200-meter dash record with a time of 21.86 seconds Jan. 26 at the John Thomas Terrier Classic in Boston. He also ran 34.99 seconds to break the 300-meter dash record Dec. 1 at the Greg Page Relays at Cornell University.

Senior co-captain Jake Dombek has struggled with injuries over the past two years but has been a strong performer for the Bombers during the winter, posting a collegiate best in the 60-meter dash. Dombek said that he hopes to maintain his health during the spring so that he can continue to contribute to the team.

“For me, personally, I’m just trying to stay healthy and be a good motivator for the team,” Dombek said. “The past two years, I have torn both my hamstrings, so for me, just trying to get through the indoor season.”

Nichols said he plans to push the team to success in the championship meets at the end of the spring. He said he plans the team’s training for the season around these races so that it will be at its best when it counts.

“We tend to peak near the end of the season, so we want to try and do well at the Penn Relays,” Nichols said. “We want to try and do well as we get to the conference — the Liberty League conference in early May and then All-Atlantic Regional Championship right after finals in the middle of May. Hopefully, we’ll have five or six people that will be at the national championship.”

The senior class will continue to take on a strong leadership role for the younger athletes as the team transitions from indoor to outdoor. Senior pole vaulter Jakob Markwardt said that the 14 seniors have focused on unifying the group.

“We’ve got a pretty big senior class, so we’ve been trying to really focus on the team aspect and supporting each other,” Markwardt said. “That’s sort of the biggest thing, at least, the seniors are kind of invested in — just making sure we are all there to support each other.”

Dombek hopes to pass on his knowledge to the underclassmen during his final season so that the team will continue to succeed after his graduation at the end of this year.“

When I was a freshman, I really didn’t know what to expect, but, luckily, we had some really great senior leadership,” Dombek said. “My goal has always been to take that leadership and kind of apply it every year down to the younger guys.”

Men’s track and field looks for first in Liberty League