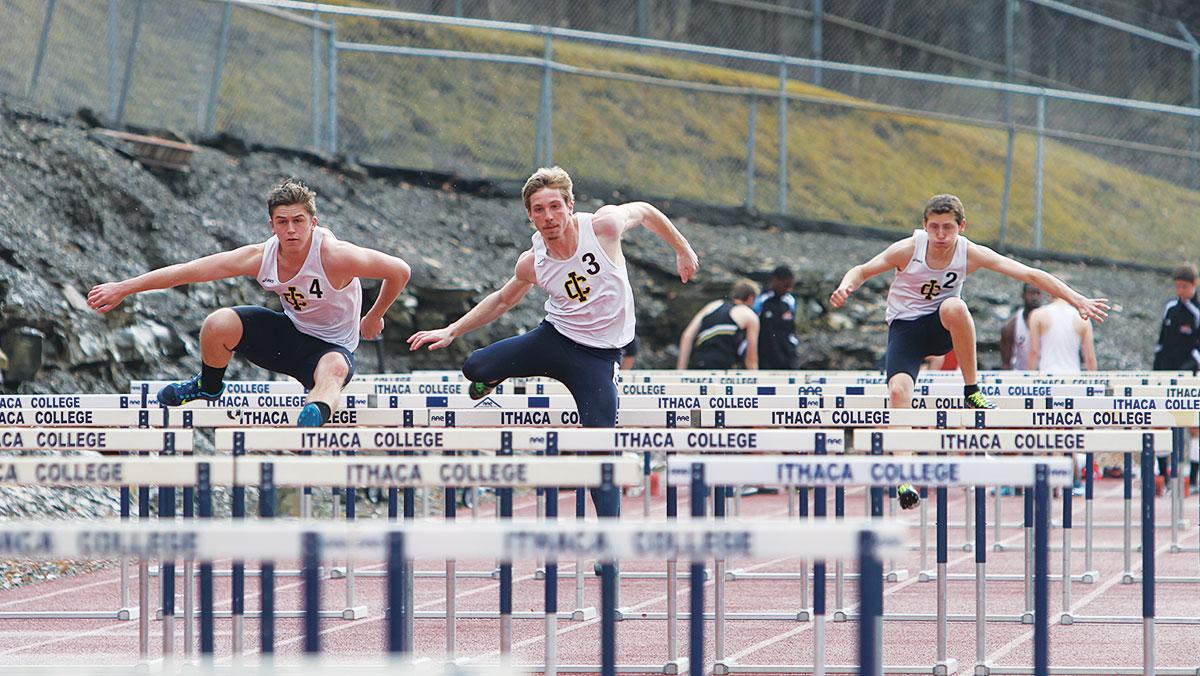 After winning for so many years, junior high jumper Andrew Brandt said it became easy to get complacent, and the team expected to win for the eighth-consecutive year.

“I feel like we had become used to winning, so when Fisher came out with the unexpected performance that they did, it served as a wake-up call,” Brandt said.

Head coach Jim Nichols said while the Cardinals put together their best performance of the season and were motivated throughout the meet, the Bombers faltered early and never recovered.

“They had excellent athletes that were excited about the opportunity to win a championship for the first time in their school’s history, and they went after it,” Nichols said. “The first event was the long jump, and they finished in the top four places, which got them 28 points, and we got one point in the event. So we spent the rest of the event playing catch up.”

Freshman sprinter Alex Graap said the Bombers are using this surprising and heartbreaking defeat as motivation as they prepare to kick off the upcoming outdoor season. Graap said the way the team practices has changed in order to encourage better performances in the long run.

“Getting second place in conference tournament was definitely a tough pill to swallow but that brought more intensity and more fire into the practices, and hopefully we can bring the same intensity to the outdoor season,” Graap said.

The team will look to some of its top returners to carry it through the outdoor season as they did in the winter. Despite the loss at the indoor conference championships, the Bombers earned five all-conference selections at the meet, including senior Rashaad Barrett, junior Stephen Gomez, sophomore Sean Phillips and freshman Tim Chappell. The 4×200 relay team of Graap, as well as juniors Dane Eckweiler, Brandon Leary and Zane Shepherd, also earned a second team all-conference selection. These returners will look to continue their success in the outdoor season.

Though track and field is a compilation of individual events, Brandt said the team is also focusing on building team unity through bonding.

“In order to be successful as a track team, we need to take the 60 people we have competing in individual events and bring us all together,” he said. “One of the ways we do that is we make big pasta dinners together the night before our meets.”

Brandt also said during meets, members of the team stand on the track cheering their teammates on and trying to motivate them to do their best, instead of hanging out on the bleachers with their focuses elsewhere.

While the majority of the events in the indoor and outdoor track and field seasons are the same, Nichols said there are many events that are exclusive to the outdoor season. He said the new events may help the team’s success because they will encourage hard work.

“When we make the switch from indoor to outdoor, there are new events we need to prepare for such as the steeplechase, the 400-meter hurdles, discus, javelin, hammer throw instead of weight throw and 100-meter dash instead of the 60-meter dash,” he said. “Hopefully that will help us be more successful in the spring than we were in the winter, because the guys with new events to prepare for will now understand how much work needs to be put in to have a successful season.”

Whether the team can rebound from the disappointment of the indoor season will be seen beginning March 28 when the team hosts the Ithaca Invitational at Butterfield Stadium.

“If we keep up the intensity and togetherness that we’ve shown in practice and stick to the training that coach has been giving us — because he’s been successful for a long time —  … we should be able to get right back to it,” he said.