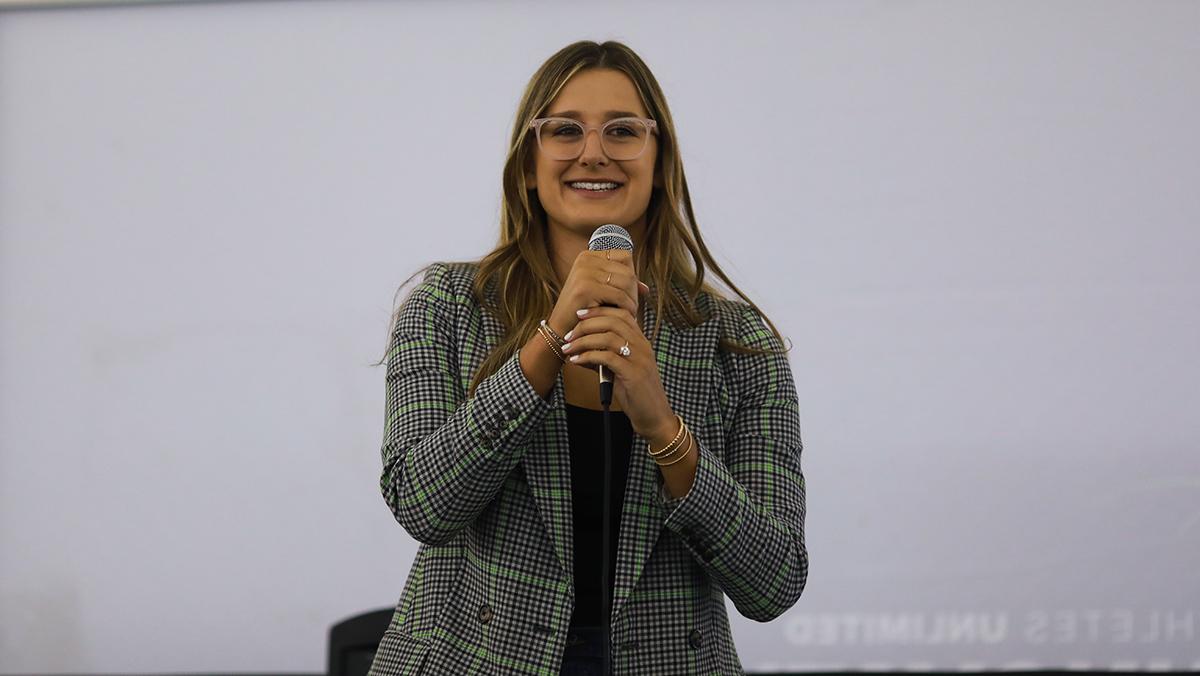 Courtesy of Victoria Garrick
Victoria Garrick graduated from University of Southern California in 2018 and has given speeches about mental health and body-image advocacy on campuses across the country.
By Tommy Mumau — Assistant sports editor
Published: September 15, 2021

The Ithaca College Student-Athlete Advisory Council (SAAC) gave each of the college’s sports teams the opportunity to meet with Victoria Garrick, former University of Southern California volleyball player, Sept. 13 to discuss the importance of mental health.

Garrick met with a group of approximately 400 people in a virtual event to share her personal struggles with mental health as a student-athlete, said senior Victoria Sestito, field hockey player and SAAC chair. The audience included Bombers athletes, administrators, coaches and staff.

The former volleyball player has shared her experiences through her social media platforms and public speaking engagements in an effort to inspire athletes and create awareness for this critical issue. Garrick also founded The Hidden Opponent, “an advocacy group that raises awareness for student-athlete mental health and addresses the stigma within sports culture,” according to the organization’s website.

This work has provided Garrick with a large social media following, including over 337,000 followers on Instagram, which she utilizes to help spread her message. Sestito said that Garrick’s endeavors have been noticed by several Bombers athletes, prompting her to help organize this event.

“I have followed Victoria Garrick on Instagram and on TikTok and have listened to her podcast,” Sestito said. “[I] was just like ‘Wow, how cool would this be if we could get her to come speak to our student-athletes,’ and the idea kind of just rolled from there.”

Sestito said that she first thought about having Garrick address the college’s athletes last spring, when the SAAC was planning its Mental Health Awareness week. The senior said that she first brought the idea to Erienne Roberts, Associate Director of Athletics and Senior Woman Administrator. Roberts then proposed the event to Susan Bassett, associate vice president and director of the Office of Intercollegiate Athletics.

Sestito said that she received a positive response from those that attended the event because many of Garrick’s messages resonated with the group.

“It was a really great turnout,” she said. “She really brought up some great points and topics that a lot of the student athletes can relate to. And I think that really showed during the Q&A portion when everybody was like, ‘This is such an amazing talk’ … Today I’ve heard from my teammates that they just loved the event and were really grateful that they were able to listen in and hear from her.”

Sestito also helped facilitate this process by reaching out to Garrick’s team to begin organizing the event. She also said that Will Rothermel, Associate Director of Athletics, and Kaitlyn Wahila, field hockey head coach, helped play a key role in this planning.

Senior Dania Bogdanovic, member of both the sculling and women’s crew teams and SAAC Bombers Leads Co-Chair, said that she is particularly grateful for the efforts that Roberts and Wahila put into organizing the event.

“I know that they both know that mental health is really important to not just students but also athletes at Ithaca,” Bogdanovic said. “So, I really appreciate their commitment to helping make this event happen and to finding the funding and the time. The organization and we’re really grateful for the two of them to help us have something like this happen.”

Sestito said that the council organized the event because it believed that Garrick’s messages would resonate with the group.

“I think that her messaging is so important and so crucial, especially in today’s time,” Sestito said. “People can be ruthless on social media … her content is just so pure and real and honest. I think that you don’t really see that a lot so when finally somebody is sharing those messages you gravitate towards them.”

Garrick recognized the impact that these conversations can have, prompting her to begin sharing her experiences by giving a TED Talk. Garrick said that since then, she has tried to use her platform to help other student-athletes manage pressures of both academics and athletics.

“I really wanted to share my story, in hopes that other athletes wouldn’t feel as alone, confused, or really ashamed as I did,” Garrick said. “So, coincidentally that semester, TEDx came to school and I applied and I had to go through this long process and ended up getting chosen, and the rest has really been a whirlwind.”

Senior Logan Ninos, wrestler and SAAC Operations Chair, said that he believes that holding this event made athletes further aware of the support system that they have around them at the college.

“This event can help [Ithaca College] student-athletes just by understanding that it’s okay to have these issues,” Ninos said. “Everyone goes through these things at some point or another. So for us, I think it really just helps us by giving us another resource to reach out to, [and] again, knowing that you’re not alone.”

Garrick said that she is humbled by the fact that student-athletes look to her for guidance when facing challenges during their collegiate careers.

“It is beyond special to me when student-athletes go out of their way to try to make this happen,” Garrick said. “I know how much they have going on with class and practice and their own lives. And so then to take the liberty to try to organize this and go to the school and say, ‘This is a conversation we want to have on our campus.’ I mean it’s surreal and I don’t take it lightly and it’s one of my greatest honors.”

Sestito said that she believes this event helped bring the student-athlete community together, by engaging in these critical conversations.

“​​I think that just hearing her messaging and having her speak to us is just a step in the right direction,” Sestito said. “And [it] can foster so many more relationships and talks about mental health, and I think it’ll be a really good space for our student-athletes.”