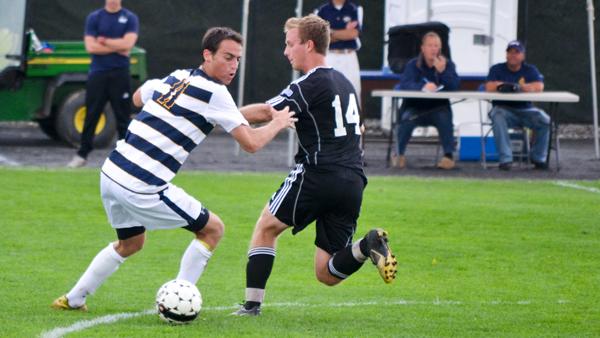 It was a sunny day in Keene, N.H., as the men’s soccer team prepared to face off against Brandeis University in its season opener Sept. 1. Joining the starting lineup this season was sophomore midfielder A.J. Wolfanger. As the national anthem began to play, Wolfanger felt nervous and glanced towards the bench. He had only been in the starting 11 once before — during his freshman year — and it took him a moment to convince himself this was real.

After seeing limited playing time last season, Wolfanger has become a solid member of the Bombers’ midfield in 2012. He has started every game for the Bombers this season and is arguably the Bombers’ most improved veteran, according to Head Coach Andy Byrne. At the end of the 2011 campaign, Wolfanger said, he knew what he needed to work on to contribute more to the team this year.

“The big thing last year for me was fitness,” Wolfanger said. “I would run up and down the field in about five seconds and I’d be ready to get a sub. I’d be out of breath. So over the summer I just worked on running every day and getting my fitness up so I could play more this year.”

Byrne said he worked on running workouts with Wolfanger in the offseason to help him improve his overall fitness.

Wolfanger also participated in lifting sessions to build his strength. He said working with the coaching staff was very helpful because he was able to learn what types of exercises he needed to do to reach his fitness goal.

“I would usually just run for a few miles, and I thought that would be getting in shape,” Wolfanger said. “Soccer’s a game of sprinting and stopping a lot, so with [Byrne] I ran a lot of sprints over the offseason, and that really improved my shape.”

Byrne said increased endurance and strength has helped Wolfanger improve himself as a defender on the field. Wolfanger’s captain, senior midfielder Jack Shirley, said he has noticed Wolfanger has also improved his work ethic and focus during games.

“He has been working extremely hard during practice so that’s what I’ve been very happy with,” Shirley said.  “It’s something that I’ve noticed in the game that has been paying off for him. It’s great for him to come in and really hold down the middle with me.”

Shirley also said he and Wolfanger both play center midfield and complement each other very well. Wolfanger is left-footed while Shirley is right-footed, and Wolfanger plays more offensively while Shirley plays a more defensive role. Shirley said Wolfanger has been able to make more of an impact in the midfield this season.

“He’s stronger on the ball now,” Shirley said. “I’ve also been very happy with the way he’s been winning balls in the air, so I can tell he’s bulked up a little bit, and it’s been helping us win those head balls and 50/50s in the middle.“

Wolfanger has already made more offensive contributions this fall after converting his first career goal during the Bombers’ 3-1 win against Nichols College on Sept. 2. He said scoring the goal felt like an adrenaline rush and was a special moment for him.