Multi athletes mix it up across many events 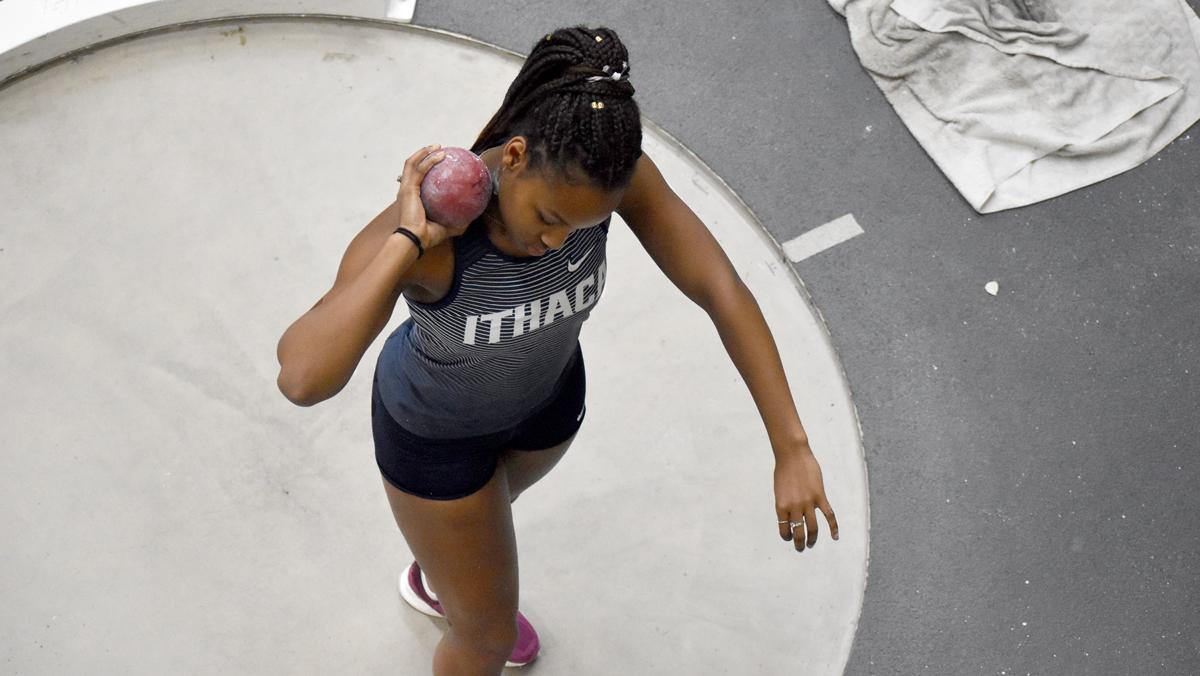 As sophomore Logan Bruce crossed the finish line of the 60-meter hurdle race at the Bomber Invitational on Feb. 2, she knew she had no time to dwell on her performance since the hurdles were only the first of five events that she competed in that day.

Bruce is currently ranked No. 12 in the Division III pentathlon with a score of 3,393 points which she posted at the Bomber Invitational. She is one of several athletes on the Ithaca College track and field teams who compete in multiple events.

Each athlete in the event gets a numerical score based on their performance in a series of individual events. The scores of each event are added together to create a final score, and the highest number of points wins. The scoring of the events is weighted differently. In the pentathlon, shot–put has the least value of the events, and the high jump and 800-meter run have a higher value.

Athletes that compete in the pentathlon or heptathlon typically excelled in two or three of the individual events before they started taking part in the multi. Coaches will then train the athletes in the remaining events to have them succeed in all of them.

Training for the multi changes from person to person, but typically every athlete has a day of practice that is committed to one or two events. Jennifer Potter, head coach of the women’s track and field team, said she determines the athletes’ practice schedules by matching up events that physiologically go together. She said she typically matches the high jump and hurdles together and puts the shot–put and long jump together. Every athlete will then have an interval day and a recovery day as well.

Potter said the practice plan involves a higher volume of training at the beginning of the season. Once athletes develop their strengths and weaknesses and possible injuries arise, the schedule becomes much more individualized for each athlete toward the end of the season.

“We look at class schedules, health and how they’re feeling, and then we’ll adjust things accordingly,” Potter said. “We make sure early on they’re getting introduced to everything, even if they’re returners, so that they’re doing a lot of the basic stuff. None of our workouts are blanketed towards everybody, and there’s specific things with specific people.”

Sophomore Abbey Stowell, who is currently ranked No. 39 in Division III pentathlon, finished third at the Liberty League Championships Feb. 28. She said individualized training has helped not only her succeed but others as well.

“I’ve been injured this whole season, so I’ve been swimming a lot and deloading so it’s really good,” Stowell said. “We don’t always do the same thing because we need different training in order to perform at our best, which I think our coach does really well.”

Graduate student Kassi Reagan, a student-assistant coach for the track and field teams and a former team member, works specifically with the multi athletes. She said the athletes that compete in the multis are special because of the physical and mental toughness they require.

“[The athletes] are doing the team practices and lift, but while the others are doing a sprint workout, you’re doing the same sprint workout, plus a jumps practice, plus maybe a throws practice, and you’re lifting,” Reagan said. “The time commitment is super unique, and it takes a super unique person to want to put themselves through that because by the end, you’re just exhausted.”

Bruce said that having the event take all day can be challenging, but the practices throughout the season prepare them for the long stretch of time it takes to finish.

“The coaches are really good at motivating us,” Bruce said. “It’s tough to get really excited when you’re that tired, and you still have two events left, and you’ve been competing for three hours. You have to keep finding ways to get excited about all of the events to get you through the day, and I think our training makes us do that.”

A challenge of the multi is that athletes do not collectively compete in it throughout the season. The only time any of the athletes competed in their respective multi before the Liberty League Championships was the Bomber Invitational on Feb. 1, due to the fact that most collegiate meets do not hold a multi competition. Because of this, the athletes will compete in a couple of the events contained within the multi each weekend instead.

Junior Kobe Guilford, who placed seventh in the heptathlon at the Liberty League Championships, said the events the athletes participate in change throughout the season. At the beginning of every week, Guilford said that he sat down with Jim Nichols, head coach for the men’s track and field team, and the two of them decide what Guilford will work on in terms of training and any upcoming competitions.

“A large part of it is what I feel like I need to work on,” Guilford said. “I don’t feel the need to hurdle every weekend because by trade I’m a hurdler. There’s not necessarily a formula. It’s however I’m feeling and whatever I decide.”

Bruce, who is currently expected to qualify for the NCAA Indoor Track and Field Championships, said that even though the multi can be mentally and physically exhausting, she loves competing in the event.

“A big part of the multi is the camaraderie and being supported by everyone and being surrounded by your teammates,” Bruce said. “We only get it a certain amount of times every year, but it’s so much fun that I want to do it more and it’s hard not to do it every weekend.”