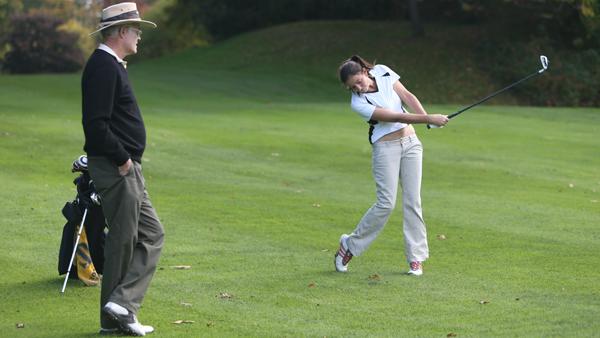 After the women’s golf team wraps up its fall schedule with Wittenberg University’s Pat Clouse Invitational this weekend in Springfield, Ohio, the Bombers will head into the offseason for more than four months before returning to action in April. But with the South Hill squad closer than it has ever been to its first NCAA Division III Championship berth, the Bombers are doing everything they can to make sure they stay sharp during the long winter break.

In previous seasons, the Bombers’ offseason routine was structured by members of the team. Sophomore Paige Fontana said the idea was to work out together twice a week — once on Tuesday and once on Thursday — using regimens devised by sophomore Kelsey Baker last year.

“She had a whole program for us, and each day we’d do a different routine of things and repeat it,” Fontana said.

The routine mostly worked, but as the offseason progressed the Bombers became somewhat lax about working out consistently on a consistent basis, Fontana said.

“We kind of started out strong, and then we kind of stopped going, and we’d be like, ‘Oh, we have to go again,’” Fontana said. “It was sort of an up-and-down, up-and-down kind of thing.”

This year, however, when the Bombers look to close the gap in a crowded NCAA Eastern region, the team’s workouts will become much more regimented. A new arrangement provides for the golf team and several of the other women’s sports teams at the college to work with Beth Greene, the women’s crew strength and conditioning coach.

Head Coach Dan Wood said the team will sit down with Greene on Oct. 23 and come up with a workout schedule to make sure the Bombers can successfully fight off any rust that might build up over the long winter.

“Beth will be in charge of giving them some guidelines for their physical workouts over the wintertime,” Wood said. “Our plan is to introduce the team to what she would like them to do to help their golf-specific muscles.”

Greene will meet with the team in November to get a feel for where the Bombers are with their conditioning, then set up a system of mandatory weekly workouts for the women to follow on a weekly basis between November and February, when the buildup to the spring season intensifies. The Blue and Gold will also take a trip down to Wood’s home in Port St. Lucie, Fla., during spring break to hit the links, but they’ll likely have to do so without three of their members, including junior Elma Gonzalez, sophomore Taylor MacDonald and sophomore Eileen Oaks, who are all slated to study abroad.

Another relatively recent addition to the Bombers’ offseason training is the presence of the Athletics and Events Center, where the Bombers will be holding most of their winter workouts and practice sessions for the second straight year. Baker said the new facility has proved invaluable for getting more practice in.

“Thanks to the new A&E Center, we’re really grateful for having a spot where we can head indoors at night,” Baker said. “We all have different parts of our swings that we work on. I have my drive and some other girls are going to be working on different parts of their swings, and then also just fundamentals like chipping and putting.”

However, Baker added that being indoors does have its disadvantages.

“Hitting indoors is challenging sometimes because you’re hitting into a net that’s right in front of you, so you can’t see whether you faded or sliced or drew the ball,” Baker said. “So you have to be able to determine those things based off of your contact with the ball.”

While the Bombers have gone undefeated against New York teams and have not lost against an Empire 8 Conference opponent, Wood said he still has some doubts about the Bombers’ NCAA chances. Wood’s main concerns are that the Empire 8 Conference does not hold an automatic bid for the tournament, and that the Northeast region is one of the deepest regions of the country in Division III in terms of talent.

“We’re getting closer but when the NCAA starts looking at the Northeast, right now we’re short of the fourth-best team,” Wood said.

Wood also said sophomore Sharon Li has an excellent chance of being selected to the tournament as an individual player.

Though the Bombers will be fighting a crowded field for one of the six or seven NCAA at-large bids, Fontana said the chance to get there will be a major motivator this offseason.