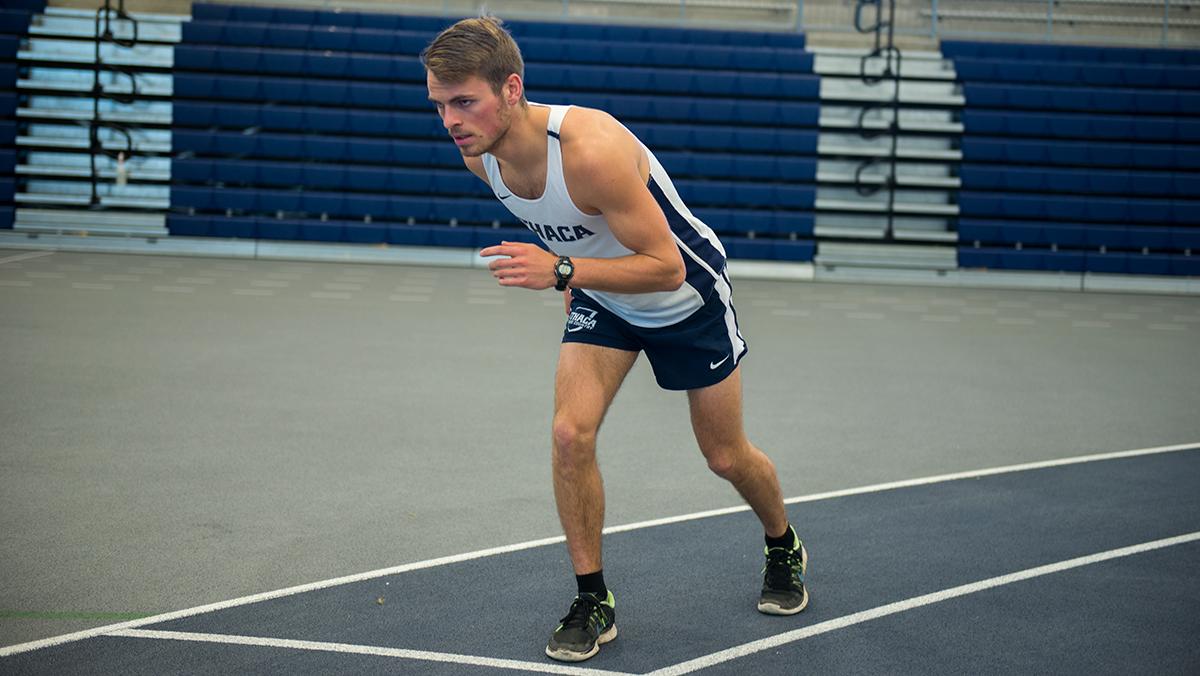 After much success last season, the Ithaca College men’s indoor track and field team is back on the track preparing for the upcoming season.

In addition, the Bombers earned 38th place in the NCAA National Championship in Waverly, Iowa, taking a national rank for the first time since 2003.

The team is looking to do much of the same this year as the program enters its 30th season under longtime head coach Jim Nichols.

The Bombers will be looking for strong performances from their freshman class, which Nichols has praised so far this preseason.

“We had a very good recruiting class,” Nichols said. “We have some outstanding freshmen that are with us right now and I’m hoping will get through everything.”

Freshman Daniel Harden will be competing in the long jump, triple jump, 200- and 400-meter dash. He said he set high goals for himself his first season as a Bomber.

“My goals for this year are to break some Ithaca College records and go to nationals,” Harden said.

Nichols said this year’s freshmen are comparable in skill to the senior class. Together, they create a well-balanced and talented roster.

“We have a very good senior class as far as overall recruiting over the years,” Nichols said. “I thought our current senior class was good when they were recruited, and I would combine those recruits with our current freshman class. Those two classes together are pretty good.”

Besides the team’s seniors and freshmen, Nichols said there’s a strong core of sophomores and juniors who round out a deep roster heading into the season.

“I know our sophomores and juniors are very solid,” Nichols said. “We have a very good group of juniors that are returning, so I think our balance is going to be really strong. I think we have really good senior leadership this year; they handled all the fall workouts pretty well.”

Senior Andrew Ward, who competes in the high jump and hurdle events, is looking to back up his all-state honors from last year’s indoor season.

“This year, we’re looking to come out with a strong showing at the Empire 8 and also take it to the state meet,” Ward said. “We’ve gotten second a couple times and have been really close, and now I think we have a chance at that first–place crown.”

Junior Seth Abbott said he is looking to improve on his runner-up status in both the Eastern College Athletic Conference Indoor Heptathlon and 4×400 relay Empire 8 Indoor Championship last year.

“I think I’m going to place pretty well this year,” Abbott said. “On the team, I had the highest multiscore last year and finished very well in states and ECACs overall. I think there’s only one other kid in the division that’s much of a competition to me.”

In the past three years, Nichols said, the program has undergone major enhancements to ensure its success.

So far, Nichols said, the strength and conditioning program has served as a launching pad for the season and continues to benefit athletes.

“It gives us a stronger base going into the season,” Nichols said. “I think our student–athletes really believe in the strength and conditioning program and want to work with it.”

As the season approaches, Ward said the squad has shown much progress already through preseason.

“As a team, we had a really strong preseason and worked hard to get in shape, and now we’re starting to focus more on technique,” Ward said.

Nichols said individual improvement will play a key role in their success this season.