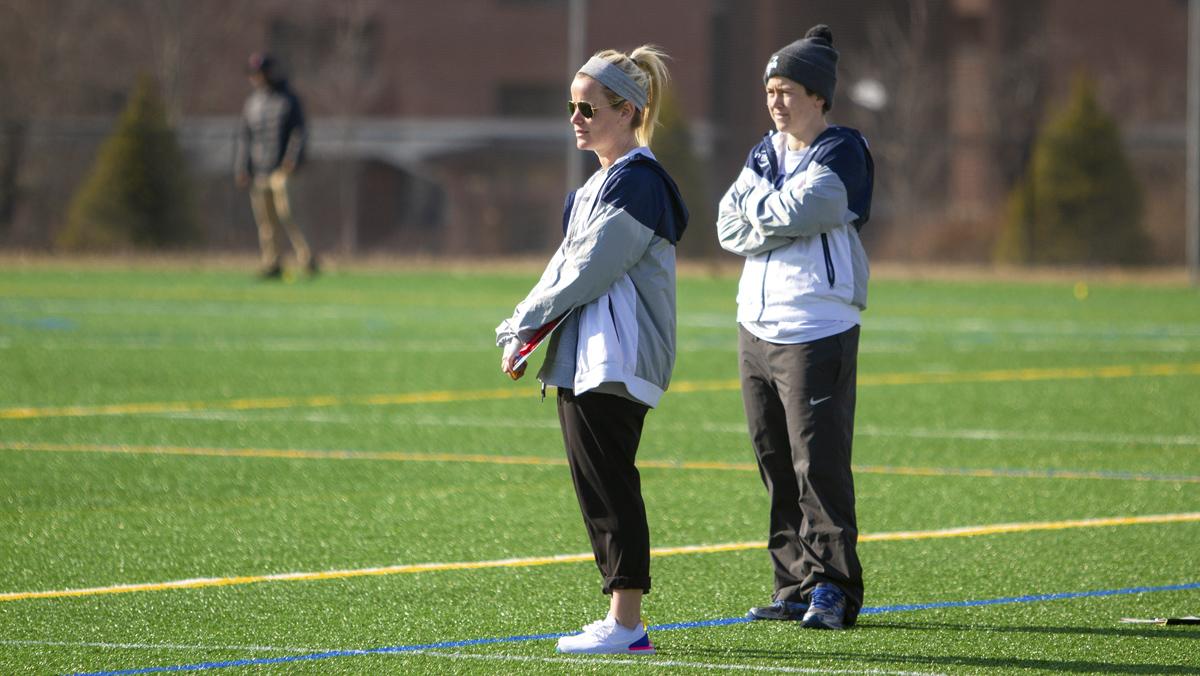 The Ithaca College women’s lacrosse team has been scoring at a consistent rate since the start of the season. The Bombers have been able to hit the twine 124 times already this season and have only been held to less than 10 goals twice.

While the Blue and Gold have been an offensive juggernaut for the past couple of years, they have benefitted from the addition of new assistant coach Kayla Minner this season. Minner was a star player for Mercyhurst University in a Division II program. While at Mercyhurst, Minner scored 136 goals and 55 assists in her four years at the institution.

After graduating, she coached at Bloomsburg University, Queens College and Winthrop University. While at Winthrop, she served as the offensive coordinator and led the offense to score 303 goals and average 15.5 goals per game, both top marks in all of Division I.

Sports Editor Jack Murray spoke with Minner about what drew her to the college, what her goals for the team are and what she hopes to add to the team.

JM: What intrigued you about Ithaca College?

KM: There were multiple reasons why Ithaca stood out to me as somewhere that I would want to pursue next in my career. I am originally from [Buffalo, New York], and my fiancee coaches at Cornell [University], so, obviously, the location was ideal. Also, the opportunity to coach at such a prestigious school and be a part of a competitive program where I know we have the means to win championships was a huge part of the decision to move back north.

JM: What have you tried to implement on offense for the team?

KM: We returned all of our offense from last year with the addition of some new players, so I tried to keep it pretty consistent to what they had been running. I added a few new offensive sets, and we just have been trying to still get the team to read and react to what the opposing defense is doing.

JM: When did you realize that you wanted to coach lacrosse?

KM: I realized that I wanted to coach lacrosse early into my playing days at Mercyhurst. I graduated with an undergraduate degree in education and have my master’s in higher education, so teaching has always been something that I have been passionate about. I love the game and am grateful that I am able to combine my two passions.

JM: What did you learn from your experiences at Winthrop and Queens?

KM: I learned a lot from being at my past two institutions. We were a Top 10 program at Queens, competing for a national championship, and then, at Winthrop, we were a mid-major Division I program. I think the biggest takeaway from now coaching at all three divisions is really just making sure the team’s culture is the foundation to your program. If you do not have a solid culture set in place, you are going to struggle.

JM: What were your best attributes as a player?

KM: I believe my best attributes as a player were my commitment to growth and continually being a student of the game. I knew no one was going to outwork me, so I could continually grow and improve my game. I also would always be in my coach’s office watching film or asking questions to really develop my understanding of the game.

JM: What are your long-term goals for coaching?

KM: I don’t even know if I have a long-term goal for coaching yet. I know that I need to be at a competitive program and a school that supports athletics and our mission. I hope to win a lot more championships.

JM: How do you plan to replicate your offensive success at Winthrop?

KM: We need to continue to improve on the little details. I believe shooting technique is huge, so we will continue to do a lot of shooting work and help them read the field better. A best offense is where the players can read and react to what the defense is giving you. You don’t have to run set plays but rather learn how to pick apart the [defense] and then attack their weaknesses. We have a very strong senior lead attack who have been doing a great job at this over the last few years, so we will continue to fine-tune and, hopefully, every outing, get a little bit better.

JM: What have you noticed about this year’s lacrosse team?

KM: I noticed that they have the drive to really go far in the offseason. I think we have to get out of our own way in the ‘big pressure games’ and just play Ithaca lacrosse. I think it’s easy to get overwhelmed in those moments, so we need to just play loose and have fun doing the things that we are good at. We have great leadership on this team, and from the first day I got here, it was evident that we all have the same mission and goals.

JM: What do you like about the town of Ithaca?

KM: I like the overall atmosphere of Ithaca. I think it is a great combination of being a college town but also has so many other things going on always that it never feels all about the colleges. I love all the opportunities to be active outside.