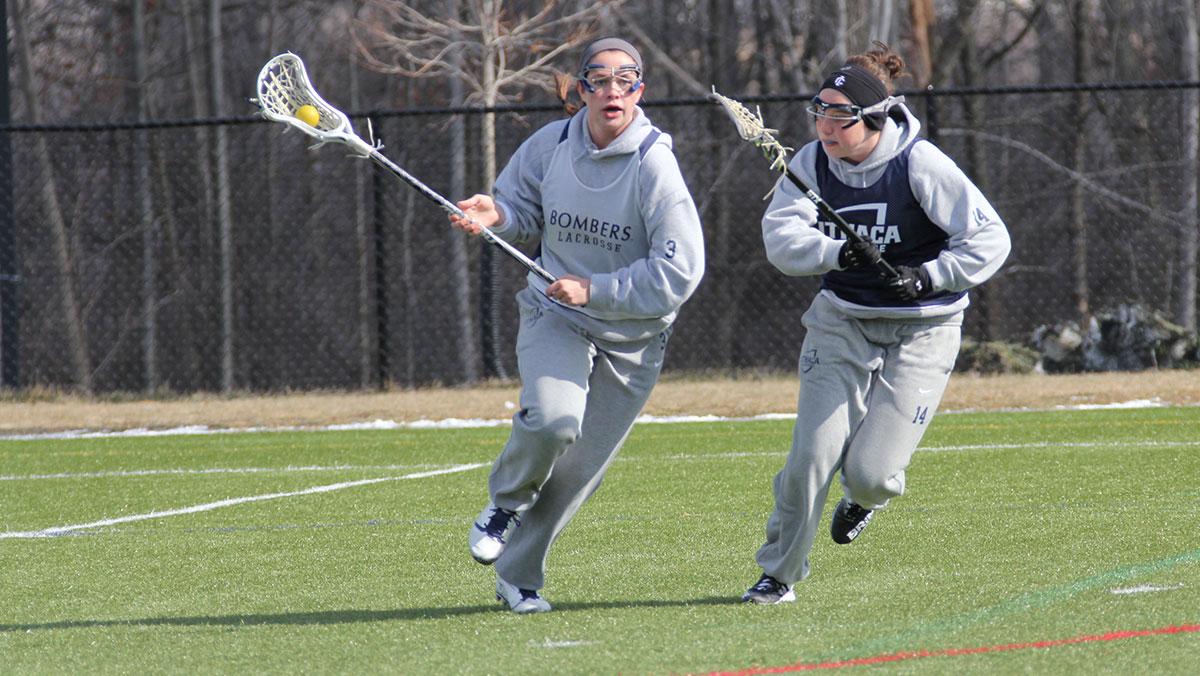 The women’s lacrosse team enters the 2016 season with its three consecutive Empire 8 Championship losses to St. John Fisher College looming over it. But with new head coach Karrie Moore leading the team and a new attitude, this experienced squad is looking to rewrite its own history.

The Bombers are coming off an overall 11–8 record in the 2015 season and are in the hunt to return to Empire 8 playoffs — and possibly even higher by attempting to qualify for the NCAA tournament this spring. The team recently received preseason votes in the Intercollegiate Women’s Lacrosse Coaches’ Association poll.

Junior goalkeeper Emily Ross said the Bombers continually express that this year, they wish to show their talent to the rest of the country and are hungry to do so.

“We’ve been talking about the goals that we want to set as a team,” she said. “This year, our goals are past just going to an Empire 8 Championship, into the NCAA’s and then to a national championship.”

Ross said this new confidence came from Moore, who took over for previous head coach Shannon McHale. McHale stepped away from the program in August 2015 after leading the Bombers for the past four seasons. Senior midfielder Riley Marion said she believes the change is a positive thing and that it could help the Bombers.

“I think it was time for a change,” Marion said. “We’re super excited to have her, especially with her coming from a great background of coaching before she came here.”

Moore, who graduated from the University of Pennsylvania in 2006, was the starting goalkeeper for the Quakers her senior year and went on to become the assistant coach at Cornell University for the past seven seasons.

Ross said Moore’s playing and coaching experience at higher levels helps the team understand what it takes to get to the next level.

“She brings with her that Division I mentality,” Ross said. “Which we like because it intensifies the game and we’re learning new little techniques, and it is a big change to adjust to, but we’re working well with it.”

Moore will have many skilled and experienced players to test out her coaching style on, as the Bombers are returning their top three point leaders in junior midfielder Morgan Cadwell, senior attackman Allison Runyon and Marion from last season. Their two goalies — Ross and sophomore goalkeeper Kimberly Presuto — along with senior defenseman Mackenzie Robinson, round out the veteran squad.

Runyon, who was a third-team All-American in 2015 and the team’s leader in points the past two seasons, said she expects the offense to play a big role too in the team’s success on the field this season.

“This year is different in the way that everyone is a threat with the offense we run,” Runyon said. “Everyone can play from every aspect of the offense. It’s a lot different.”

While Runyon may be the Bombers’ leader and best player, she is also their biggest question mark going into the season. Runyon suffered a knee injury that has sidelined her from practicing with her teammates.

Runyon said she is uncertain when she will recover from the injury and be able to play this season, but she said she is doing everything in her power to get back to full strength and help the team win.

“I’m trying to get back on the field,” she said. “Taking it day by day, making progress, focusing on my knee in the training room and focusing on the team when I am at practice.”

If the Bombers wish to return to the Empire 8 playoffs, they will have to face some tough conference and nonconference matchups over the course of the season. The Bombers will play their first road contest March 8 against the defending Division III National Champion SUNY Cortland.

They will play Nazareth College and Stevens Institute of Technology, two of the best Empire 8 teams, in back-to-back weekends March 26 and April 2. Their nonconference matchups include away games against ranked teams such as Franklin & Marshall College on March 12, SUNY Geneseo on March 30 and Hamilton College on April 19.

The Bombers’ final big test will occur on Senior Day, when the St. John Fisher comes to Higgins Stadium on April 30, for the rematch that Runyon said the whole team has circled on their calendars. Runyon said a loss to them in conference or postseason play is unacceptable.

“We definitely don’t like them,” Runyon said.  “They are our biggest rival. It’s so frustrating that we lost to them, but it’s better not to think about the other team and worry more about ourselves and our game.”

The Bombers begin the season at home at 1 p.m. March 5 in Higgins Stadium against St. Lawrence University.

Marion said the team is ready for its season opener.

“We’re getting really excited,” she said. “There is a lot of excitement and determination around us.”