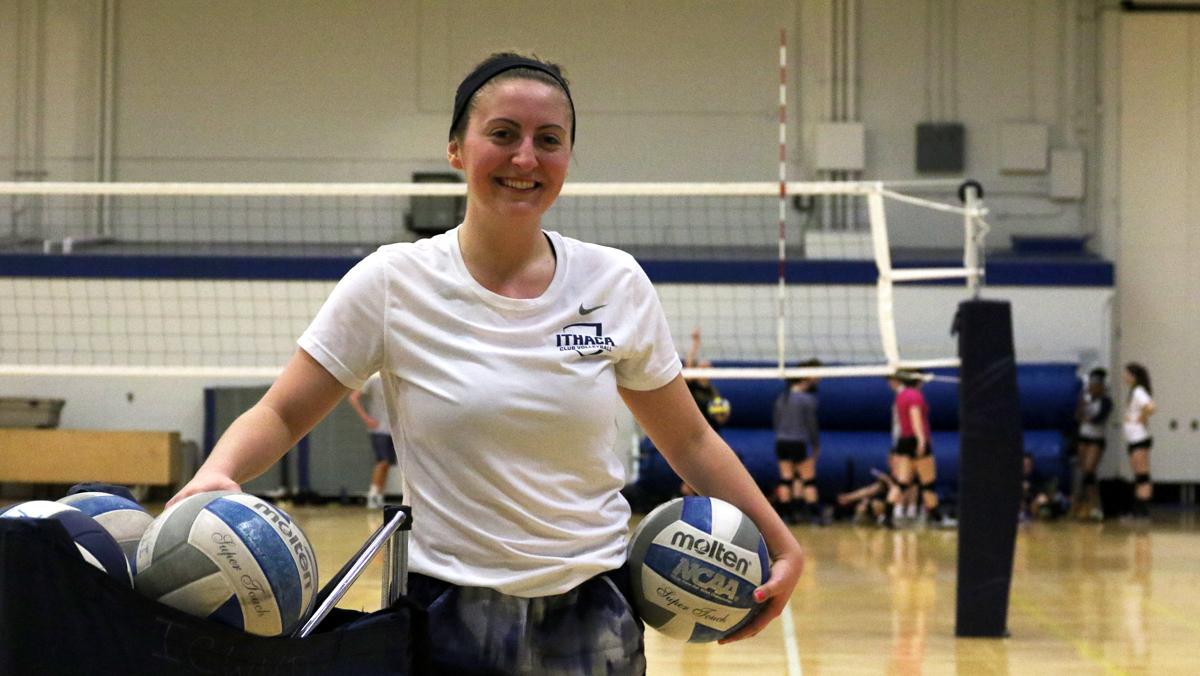 ELIAS OLSEN/THE ITHACAN
Junior Maddy Horowitz serves as both coach and president of the Ithaca College women’s club volleyball team. The team will be competing for a national championship in April in St. Louis.
By Matt Hornick — Sports Editor
Published: February 21, 2018

Junior Maddy Horowitz arrives to women’s club volleyball practice with a different mindset than her teammates. As the team’s coach, Horowitz is not only a participant at practice, but the person in charge.

Horowitz took over the role of coach from graduate student Stevie Sass, a former member of the team who said she had to step down after one semester because she was unable to balance coaching with her schoolwork.

“I didn’t feel I could give my full attention to the team as a coach and juggle my scholastic responsibilities,” Sass said. “I am on a scholarship for graduate school and need a specific GPA to keep that scholarship. Volleyball has been a part of my life since seventh grade, so it was a very difficult decision that I did not take lightly.”

While some club teams are coached by students, it is rare that an outside coach would quit midseason, forcing a student to take over.

Horowitz said she and the team’s executive board would run practices when Sass was unable to attend. Once Sass officially left the team, Horowitz was the first person her teammates looked to as a replacement.

“Maddy was already like a second coach,” Patrick said. “She’s a natural leader and really wanted the position.”

Horowitz said she started to gain familiarity with coaching the team during the fall semester.

“In the fall, there had been tournaments where we didn’t have a coach at the tournament,” Horowitz said. “I was the one making the lineups and rallying the girls together, saying, ‘We’re all in this together, and we don’t have an adult figure to pace up and down the sideline and tell us that we suck. So let’s just do what we can.’”

As coach, Horowitz’s responsibilities include making the team lineups and schedule. She has also incorporated more drills into the team’s practices along with an emphasis on conditioning.

“Our old practices were very monotonous,” Patrick said. “We didn’t have a lot of energy because we were doing the same things every time. Maddie has taught me more than my high school coach ever did.”

Horowitz said that she is aware she is coaching her peers and is still a member of the team, and she said she makes sure to act accordingly.

“I’m not the best player on the team, but I think the girls see that I know the game,” she said. “It’s not like I’m the almighty player of women’s club volleyball.”

Horowitz said that being a player and a coach gives her a different perspective from a normal coach who is not playing on the team.

“As someone who’s on the court with them, I see what they have to offer, as opposed to someone on the sidelines who may only see their faults,” Horowitz said.

The team is currently ranked 12th in the Northeast Women’s Volleyball Club League out of 30 teams and is looking to move into the Top 10 to qualify for the regional tournament March 31. The team have plans to attend the national tournament April 12–14 in St. Louis this spring.

Sophomore Isabela Julian said the team is most looking forward to the opportunity to go to nationals.

“We didn’t get to go to nationals last year, and there are a lot of people on the team that haven’t gone to nationals before, so everyone is super excited about it,” Julian said.

Despite being president of the team, Horowitz said she never envisioned herself being the coach but was more than willing to take on the role when it presented itself.

“I’ve always wanted to coach,” Horowitz said. “I didn’t see myself coaching this team, but since it was such short notice, I jumped at the opportunity.”