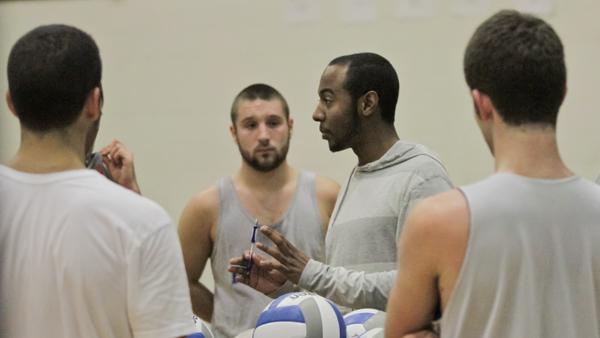 After years of being led solely by captains, the men’s club volleyball finally has its first coach, graduate student Christopher Harris. Many of the players expect Harris to set a more serious tone this season and to guide them into a more competitive mindset.

When Harris arrived at Ithaca College, he was offered a position as an assistant coach for the women’s varsity volleyball team. Harris met some of the club team members earlier this fall by chance, and they told him about the men’s club team and encouraged him to play. After Harris joined the players in some of their open gyms, the team approached him and asked if he would be their coach.

Senior and club team captain Dave Gofman said the club’s lack of a coaching staff put a lot of pressure on the players and created some tension last year.

“We all basically tried to help each other, and the players who had more experience or who had coached previously at any capacity with volleyball tried to help others,” Gofman said. “It was definitely tense at times, because it’s a difficult dynamic to play and coach the same team. It definitely was not the easiest thing in the world.”

Sophomore Joshua Edrich began competing last fall as one of the only freshmen that made the team. Edrich said he remembers practices being very simple. No one was really trying to push too hard. As the year went on, practices became increasingly more lackadaisical, and without a coach they relied on the experience of other veterans.

“We goofed a lot, and we were not as committed or anywhere near as competitive as we should have been,” Edrich said.

The team travels to tournaments that sometime require them to leave at 5 a.m., arrive at 9 a.m. and play until 4 p.m. Gofman said this can be exhausting physically and emotionally, but he believes Harris will alleviate the stress in this aspect.

“Now with Chris coaching us, he does a much better job of motivating and working with us and making sure that people are working on those things they need to work on to get better,” Gofman said. “It’s putting us in a much better position to reap the benefits of the hard work we are putting in.”

Edrich said cardio, physical workouts and repetition of skills are all a focus in practice now. He hopes to bring the intensity many of the team members experienced on his high school varsity team to the club this year.

“Even though the team has only had four practices thus far, they are already much more intense than last year,” Edrich said. “Chris is a great athlete. He’s pushing us more than we’ve been pushed in a long time.”

Harris said taking the skill and potential of the team and capitalizing on that will be the biggest challenge for this year. He also said he hopes to bring two things to the team this season that it has lacked in the past: discipline and consistency.

“They have the skill, but they are not used to having to hone in on this or that and be able to step on the court and produce that thing every single day, day in and day out,” Harris said. “If we can focus on working hard and training on a high quality skill level and being excellent at what each one of us does, I don’t see anyone being able to stop us.”