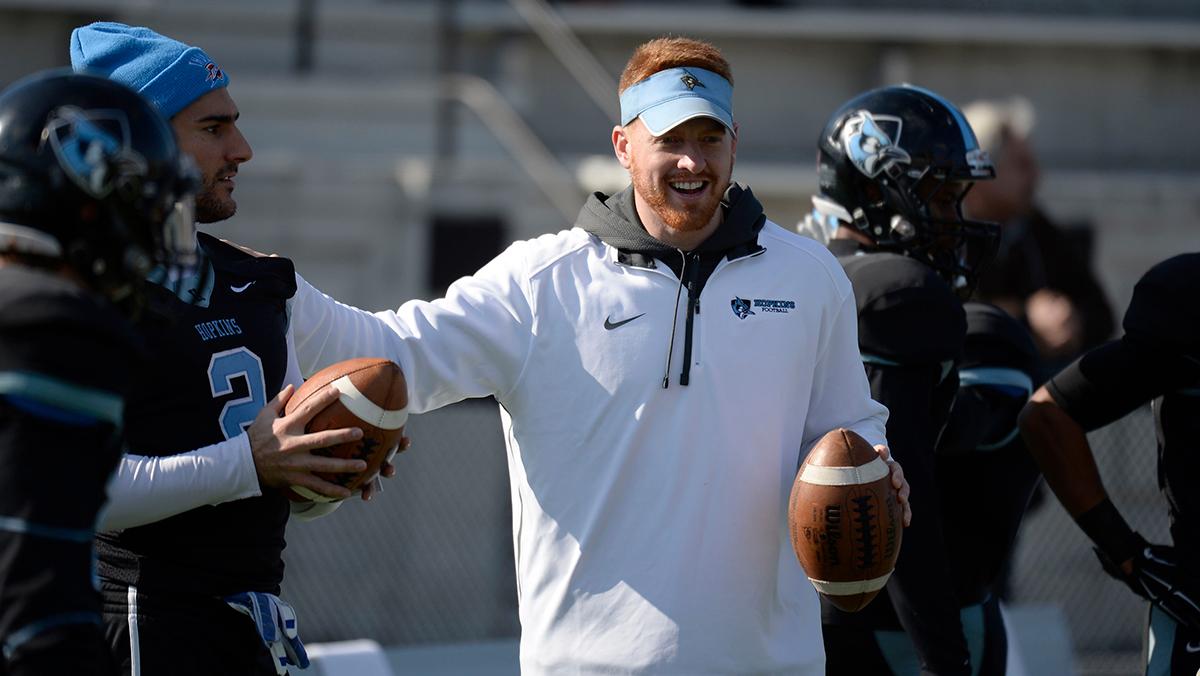 Toerper graduated from the University of Pittsburgh, where he was a defensive back and special teams contributor. He worked at Johns Hopkins University for seven years, where he was the wide receivers coach from 2010 to 2012 and the special teams coordinator and defensive backs coach beginning in 2013. Toerper worked with associate head coach Dan Swanstrom for four years and went to four conference championships with him. Swanstrom was hired in December as the new football head coach, replacing Mike Welch ’73, who held the position for 23 years before retiring at the conclusion of the 2016 season.

Assistant Sports Editor Caitie Ihrig spoke with Toerper about his decision to come to the college, his coaching style and his thoughts about coaching with Swanstrom again.

Caitie Ihrig: Why did you want to be the defensive coordinator at Ithaca College?

Mike Toerper: There’s a lot of reasons that I was attracted to Ithaca College. First and foremost, the historical tradition that I knew about from some of my colleagues in the coaching business. They told me a lot about Ithaca College and how successful their athletics program has been over the years and traditionally. … I didn’t know what to expect before I visited. I had looked a lot online about the school and about the surrounding area. But when I was able to get on campus for the first time, I was really blown away. First and foremost, by the Town of Ithaca. Once I got to start walking around campus and meeting people, from both athletics and the school, I thought it had a great mix of a commitment to academics as well as a commitment to athletics. That was very prevalent when I had a few meetings with Susan Bassett [director of intercollegiate athletics] and just coming across a couple other members of the staff. Ithaca has a great tradition, and I think it is a place that I can grow as a coach, but I think it has a great environment for me to grow as a leader and as a teacher.

CI: What are your thoughts about coaching with Coach Swanstrom again?

MT: I’m elated to coach with Coach Swanstrom again. When I first got to Hopkins, he was very instrumental in my growth as a coach. That’s from all aspects. From ways to approach the offseason to how you train players to football X’s and O’s and then as far as gameday management and as far as recruiting. Every step of the way, Coach Swanstrom has helped me grow as a coach. Even when he left Hopkins for the University of Pennsylvania, we stayed in touch. We continued to be really close at that point. I’m just looking forward to picking up where we left off when he left Hopkins. We shared a lot of similar views on different approaches to promoting the program, and I think our personalities really mesh well. We are very focused on a common goal.

CI: What is your favorite memory from coaching with him?

MT: Winning the four conference championships together during the four–year stretch that we were together.

MT: Once Coach Swanstrom was appointed, I think there were a couple months that went by and there wasn’t any openings in the staff. Recently, the job was posted, and I let Coach Swanstrom know that I was certainly interested and looking into the position. At that point, he told me to apply. I did so, and I came up on an interview. I had a chance to meet with Susan Bassett along with two of the players and some of the other coaches. Last week, I was offered the job. It was a pretty simple process. It was not painful at all. It was an eye–opening experience for me into what Ithaca College is all about.

CI: What do you hope to gain from this job?

MT: I believe it’s not as much as what I’m hoping to gain from it, but I hope I can bring a lot of energy, and I hope that us as a coaching staff can bring a lot of success to the Ithaca football program. I think the experience is going to be outstanding, and to have a chance to work with some new coaches that I haven’t worked with before, getting the chance to know them and to meet a brand-new group of players that I’m going to learn a lot from as well. Really, our sole purpose here is to build leaders — the leaders’ being the football players — and win championships. That’s really what we are focused on as a staff.

CI: What is your coaching style?

MT: I believe that I bring a lot of energy and passion to my coaching style. I think one thing you will notice about myself is that I’m very detailed, but I think I have also become a very good teacher as well. Those are two things that are very important to have success as a coach. It’s not only just being a fiery, energetic coach on the field, but knowing how to have fun and teach the guys how to invest our time. I believe that you have to be able to teach players in the simplest way possible to really understand what they need to do on the football field to be successful. It doesn’t have to be the most complex defense in the world. I’ve always been told a quote that stayed with me for a long time, in that “It’s not about what you know as a coach, but it’s about what your players know.” I’m going to really focus, especially my first few months on the job, on being a great teacher for our football players.

CI: What are you most looking forward to in the upcoming season?

MT: First and foremost, before the season gets started, I’m looking forward to getting to know every single player on the Ithaca football roster personally. Getting the chance to work with them on a day–to–day basis — I think that is what I’m most looking forward to. When it comes down to it, it’s a player’s game. I can’t wait to get started with them as far as introducing the defensive scheme that we are going to be running. I would be lying to you if I didn’t say I was looking forward to our first game against Alfred in Butterfield Stadium. I’ve never seen a game there live, and I’ve been on the field a couple times now. I’m just picturing what it looks like filled to capacity, and I’m hoping that first Saturday we play Alfred it’s going to be a packed house. Right before kickoff is going to be a special moment.