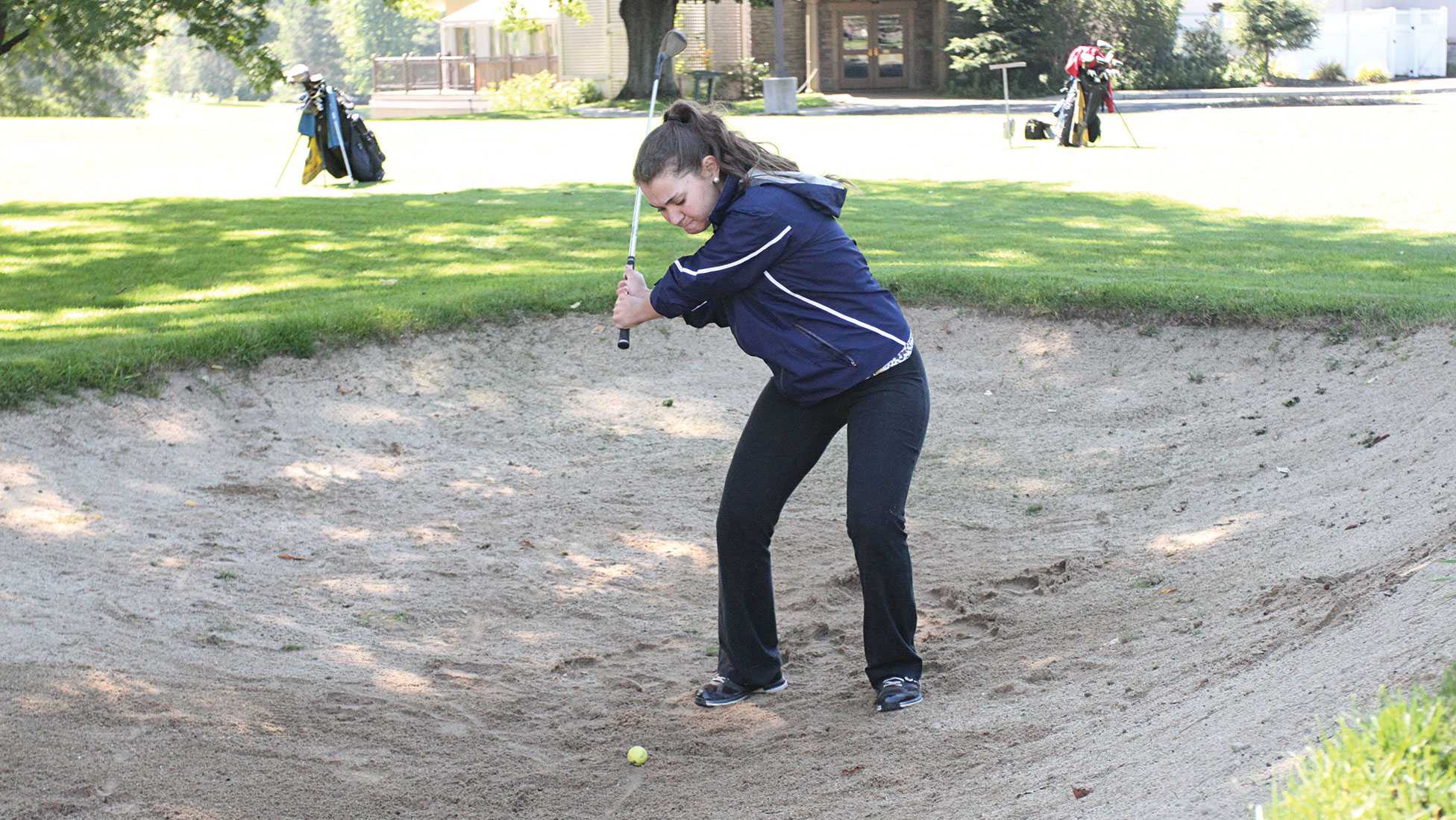 Jillian Flint/The Ithacan
Sophomore Kyra Denish keeps her eye on the ball as she makes her backswing during a team practice Sept. 19, 2014, at the Country Club of Ithaca.
By Caitie Ihrig — Contributing Writer
Published: August 27, 2015

The women’s golf team will have to adjust to a new dynamic this upcoming fall after some major changes took place during the offseason.

After winning five of last year’s 10 tournaments — including the Empire 8 Championship — and coming in second in three of the tournaments, the Blue and Gold will have some big holes to fill this upcoming season.

However, challenges come with the team seeing its second coach in program history and losing three-time All-American Sharon Li ’15 at the tees.

With the the loss of Li, the Bombers will also have to work harder to be invited to the NCAA Championship.

The team’s success will depend on whether the South Hill squad can step up its game, which largely hinges on the budding relationship between the players and new head coach Molly Braid. The athletics department appointed Braid to the position Aug. 12.

However, the Bombers will still have past relationships to count on as dominant players Li and Kelsey Baker ’15 will be back as graduate assistants to help the team this season. 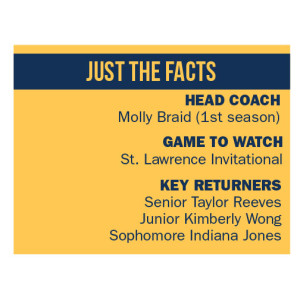 The Bombers know they will have a very different dynamic this season following the retirements of coaches Dan Wood and Sandi Wood, sophomore Indiana Jones said. She added that the Blue and Gold have a strong group of returners the team can rely on. Jones returns to the Bombers after attaining an average score of 84.38 in 13 rounds last season.

“The good part for the five returning players is Sharon and Kelsey will be back to help the team transition to having a new coach and still use their knowledge of the game to help us returning players,” Jones said.

Sophomore Kyra Denish, who played 15 rounds last season and ended the year with an average score of 90.40, said the team will also be able to pick the brains of former teammates in order to capture similar success this upcoming season.

The team is also looking forward to seeing what Braid’s prior experience will bring to the team. Before she was hired as head coach, Braid was a member of the Ladies Professional Golf Association and taught young girls how to play golf, which Denish said will be a huge benefit to the team as Braid will be able to effectively teach the players the basics.

Sophomore Lauren Saylor and her teammates said they are looking forward to working with the new coach. Baker said the players will have more time to work with Braid and to focus on making improvements to specific parts of their game. Baker, who averaged a score of 79.94 in 17 rounds last year, said she believes this will have a positive effect on the team as long as the players continue to support one another and build a good relationship with Braid.

Saylor said the women may have to rely on this greater bond to help them through the changes on the team. Each of the six remaining women will have to step up and fill the roles left by the seniors who graduated, including Baker, Li and Taylor MacDonald ’15.

“No more Sharon Li leading the scoreboards, no more [MacDonald] putting a positive spin on everything, no more of Kelsey Baker’s strong-willed leadership as a team captain,” Saylor said.

The Bombers each have short-term goals set, which they said they are hoping will help them succeed this season. Both Denish and Saylor said they want to become better mental players, and Jones said she would like to place in the top-10 in every tournament.

The short-term goals will not only help the team achieve its long-term goal of getting to the NCAA Tournament but will also help the players do their best in every tournament this season, Denish said.

“One goal is to play the best golf we can as a team and as individuals,” Denish said. “Each girl achieving their short-term goal will help them with this overarching goal. Golf is a day-to-day game.”