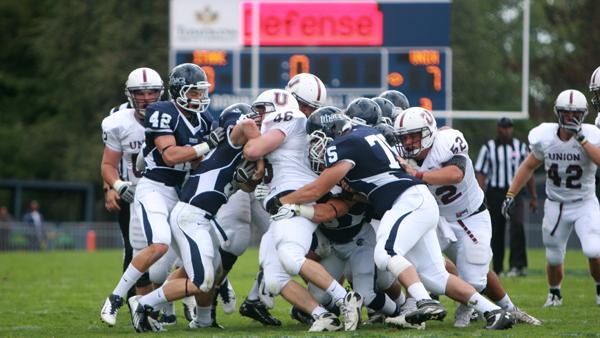 On a mid-September afternoon, with a strong breeze blowing down the South Hill, the football team’s defensive coordinator, Mark McDonough, stares at his defense as it prepares for its Empire 8 Conference opener at Frostburg State on Saturday.

He is efficient with his words, calling for quick, pre-snap adjustments. A scout team lines up across from a defense, a defense that has limited opponents with a conference-best 229 total yards per game this season.

The Bombers’ successfull, stingy defense comes despite the fact that two of the team’s leaders in tackles from last season, Joe Gilfedder ’12 and Spence White ’12, and three of the four members of the Bomber secondary, White, Mike Conti ’12, and Kevin Cline ’12, have all graduated. McDonough said he appreciates the work done by those who replaced the graduating players.

“There were some questions about how the new guys would step up and how they would perform, and from a personnel standpoint they stood up and did an excellent job,” McDonough said. “There’s always work to be done, but as far as guys stepping into their roles and handling the workload, they’ve done a very good job.”

Senior defensive end Skyler Schlenker is the most experienced member of the defensive line, having started all but one of the Bombers’ last 13 games dating back to last season. Schlenker said the defense’s 13 sacks in its first three games may be a sign of things to come.

“We have the potential to be a really good sack team because we generate a lot of pressure as a unit,” Schlenker said.

The linemen face a tougher challenge as part of McDonough’s 3-4 system. The linemen are aware of the work that needs to be done to help the linebackers make the tackles. Junior defensive tackle Dan Sheldon said this awareness comes through mutual communication on the field.

“A lot of what we do comes from collaborating as a group,” Sheldon said. “It’s mostly with the defensive linemen and the linebackers. It’s just knowing where you’re going and knowing where they’re going, so you stay out of their way.”

Senior middle linebacker Will Carter leads the linebackers. After missing the first half of 2011 with an injury, Carter has begun this season strong with a team-leading 33 tackles. Even as the defensive captain, he is subject to McDonough’s rotation, which featured eight players in the linebacking corps last season and features a similar number of linebackers this season. McDonough said the deep rotation is ideal for the defense.

“I’m in a good position of having a lot of depth, which I think fosters an environment of competition, and those guys have responded well to it,” McDonough said. “It raises the level of play for everybody, and everyone understands the best guy is going to play, senior or sophomore.”

Another hallmark of McDonough’s defense is a sense of community. Schlenker said McDonough has instilled a mentality that stresses that the whole is greater than the sum of its parts.

Junior outside linebacker Brian Hardenberg said his career-high 12 tackles in the Blue and Gold’s 27-24 win against Union on Sept. 15 were a result of him doing his part in the defense.