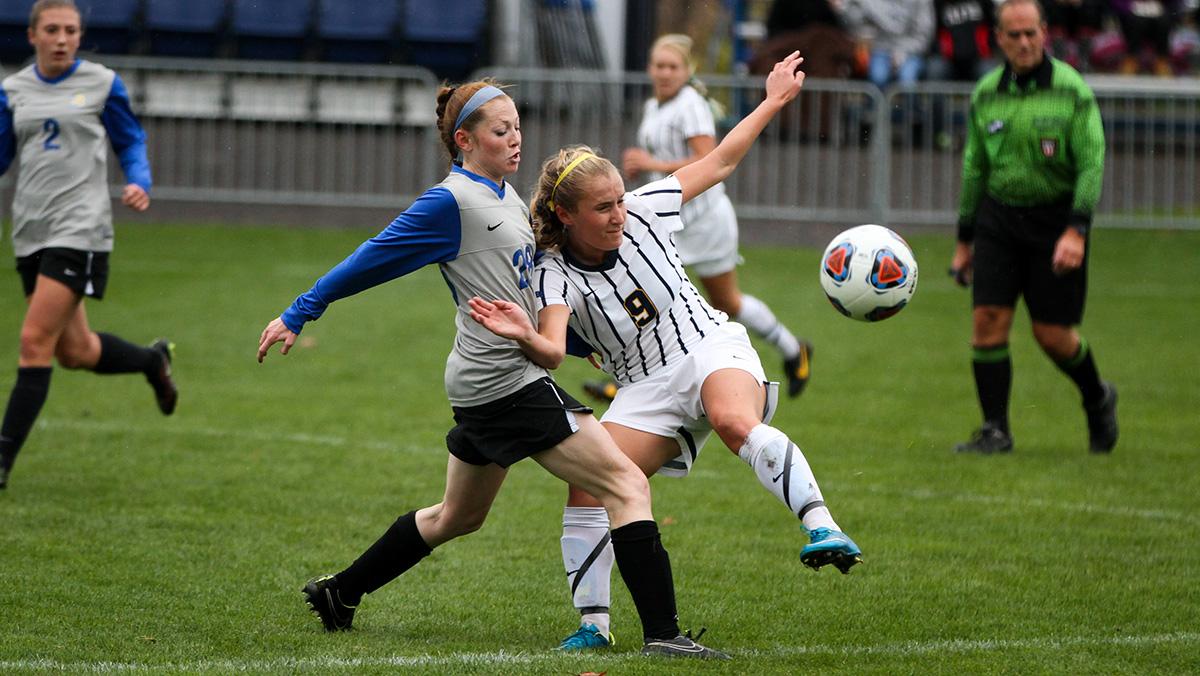 The Ithaca College women’s soccer team halted the Misericordia University Cougars nine game winning streak with a 2–1 win Oct. 28 at Carp Wood Field. This victory over No. 17 Misericordia moves the No. 24 Bombers to 11–3–2 on the season and 5–0–2 in the Empire 8 conference.

In the first half of the match, Misericordia was able to keep the ball in its offensive half of the field. This took a toll on the Bomber defense, but the athletes were able to play with composure and confidence, said sophomore defender Kendall Cirella.

“I thought we definitely played through the highs and lows defensively, but we held it together really well,” she said. “They’re a really good offensive team, but we played with our hearts and left it all on the field.”

Although the Bombers did not keep the ball the majority of the game, they were able to capitalize on the offensive opportunities that they received. Senior forward Kelsey King said there was constant pressure to the Cougar midfield and defense throughout the match because she knew they would be a tough team.

“This was a really big win for us not only against another nationally ranked team, but against a team that we tend to be back and forth with,” she said. “I think today we just really wanted it.”

The Blue and Gold took the lead over the Cougars in the 16th minute with a goal from senior forward Sarah Woychick on an assist from junior forward Megan Nash.

After being substituted in the second half, junior forward Jocelyn Ravesi yet again added fire to the Bomber offensive. She found the back of the net with a ball up the right sideline from classmate midfielder Taylor Baranowsky. Ravesi said she is happy with how the game went and how the Bombers look going into the rest of their season.

“I think we came out really hard today and fought,” she said. “As a team, we’ve gotten a lot better at combination play at shots on frame, so we are feeling pretty confident going into this weekend.”

With just under six minutes left in the competition, senior forward Megan Antrim found an assist from teammate sophomore forward Alex Gallagher, making the game into a battle moving the score to 2–1.

The game ended with a Misericordia free kick on its half of the field with just under a minute left as the Cougars were unable to capitalize.

Senior goalkeeper Beth Coppolecchia had another strong game in net for the Bombers with 10 saves and only one goal against. Opposing senior keeper Maureen Ciccosanti had four saves in the losing effort. The shot differential for the match was 16–26.

“We’ve been preparing and getting better, and we are at the end of our season, so we are hopefully getting to be the best we can be, and I think that we just wanted it more today,” King said.

The Bombers will close out their regular season play at noon Oct. 31 against Empire 8 competitor Utica College for Senior Day.